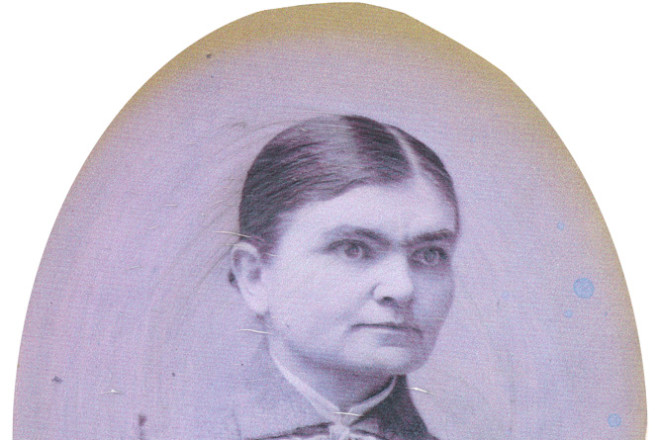 Listed on the National Register of Historic Places, the Noble House sits on the corner at the foot of the Fish Creek hill. Alexander Noble built the home in 1875, his 22-year-old daughter Ula designing the floor plan. In a sense this act served as an emblem for her life, as well as for those of many other 19th century women who were destined to be the subordinates of men, their efforts often unseen as they voted “indirectly,” were denied public positions, and were expected to be passive partners for husbands. 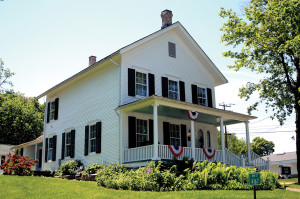 But submissiveness did not come easily to her. “She led a very unhappy life,” commented Barb McKesson, President of the Gibraltar Historical Association (GHA). That organization’s biographical notes on Ula Noble praise her as “a pioneer in the fight for women’s rights.” The unpublished romantic letters that the young woman wrote to her stepmother, however, tell of other frustrations.

Alexander Noble was born in Edinburgh, Scotland, in 1829 and came to Fish Creek in 1862, after first settling in Canada, New York, and Chambers Island.

In New York he married Emily Vaughn who gave birth to three children, the oldest of whom was Ula, born in 1853. His wife died in 1873, and he married Maria Campbell in 1875, fathering six more children. Maria was a friend whom Ula had brought home for a visit.

In addition to working as a prosperous blacksmith, a postmaster, and farmer owning 300 acres of land around the village, Noble had a political life, representing Gibraltar Township on the Door County Board as a conservative Democrat from 1872 until 1884. He donated land for an elementary school, now the site of the Fish Creek Community Center.

His daughter chose an active life for herself as well, first as an elementary teacher in local Northern Door schools (including Baileys Harbor, Ephraim, Fish Creek, and Jacksonport). In letters written during the 1870s she reported having 60 students in her classroom in Baileys Harbor. But she felt constrained by the limitations of teaching:  “I fear I shall die here without seeing more of the world.” And she did not feel fulfilled:  “I know all the glory there is in teaching” but “I declare that others are better fitted to become martyrs than I!”

Ula Noble attended the Chicago College of Pharmacy and in 1892 graduated as one of the first female licensed pharmacists in the state. She returned to Sturgeon Bay to practice in H.G. Hildebrand’s Drug Store, but when she found that she could make more money as a bookkeeper for Washburn’s Department Store, she abandoned her pharmaceutical career.

Like her father, Ula Noble entered the political arena but was handicapped by the reality that women would not be allowed to vote until well into the next century. In 1886 the State of Wisconsin called for a referendum that would not only permit women to participate in the election of school offices, but to hold them as well. Noble ran as a Democrat for County Superintendent of Schools; unfortunately the referendum failed in conservatively Republican Door County (although it was approved statewide elsewhere) and she, too, was defeated. She lost again the next year (this time to her employer L.M. Washburn) when she ran for School Commissioner of Sturgeon Bay. In 1906 at age 53 she became the first woman in Sturgeon Bay to be elected to that position (school board member) and served three consecutive terms.

As Alexander Noble belonged to the Masonic Lodge, his daughter wished to follow in his footsteps. However, the female branch of that organization, the Order of the Eastern Star (OES), was not available in Wisconsin. Ula Noble requested an OES charter for Sturgeon Bay from the national organization. Subsequently a state charter was created, the Sturgeon Bay group became Honor Chapter #1, and she ultimately became Worthy Matron, the highest office. 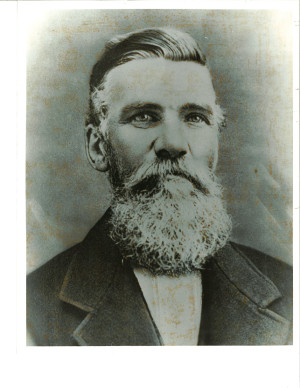 Just as Ula Noble experienced challenges when she attempted to compete in a male-dominated world of business and politics, she also did not fit well into the prescribed social order of the time. She was not one who could find happiness in a husband and childbearing.

A number of letters have survived that she wrote during the 1870s to her girlfriend and later stepmother Maria Campbell. This was a tumultuous time in her life; the death of her mother, her father’s remarriage to Campbell, the building of a house to replace one that had burned in 1868, and finally, her forced exile from the house by her father. Perhaps he hoped to bring an end to what he considered an unhealthy emotional relationship between the two women. (Some biographers suspect that the marriage arrangement was his scheme to end what he considered an inappropriate relationship between the women.)

Although Maria Noble’s letters to Ula Noble at this time have been lost, the relationship clearly was reciprocal and continued after her marriage and childbearing.

The letters were found in the house after the death of Alexander Noble’s granddaughter Dr. Gertrude Howe when the property became a museum. Because many of them are written in faded brown ink with sentences crowded onto pages to conserve paper, the penmanship is sometimes illegible. Occasionally, Noble uses a playful code for expressions of affection, providing the initial letters of each word but suffixing “gery.”

The correspondence reveals the fabric of life on the Door Peninsula during this decade, as the letters are filled with the minutia of daily living:  attending church services, tending garden, visiting neighbors, teaching school. And they are intriguing because of the drama of a doomed relationship. While Victorian decorum precludes lurid details, Ula is direct in the expression of her affection for her girlriend, often beginning with the salutation, “My own precious darling,” and frequently lamenting at length her sadness and frustration over their separation:  “Last Sunday night no one knew how hard it was for me to leave you.”

“Mooma” is her pet name for her stepmother-girlfriend. She writes of kissing and keeping Maria’s letters literally next to her heart, often gushing with the abandon and self-absorption of an adolescent girl.

She writes that she wants people to think that a local man will be her future husband to silence tongues, and notes that people in Ephraim “fear I will get married and there’ll be no one then to talk about.” And she sighs, “Alas! ‘tis hard to reconcile oneself to a life of old maidism especially after thinking what might have been.”

In another she writes “my father understands my disposition well enough to know that after what he has said to me I never could be happy in his house.” In yet another she refutes her father’s statement to Maria that Ula’s mother was pregnant when she married him. The correspondence reveals a bristling love-hate relationship between Ula and her father.

No letters have been found from the decades that follow. Maria, seven years Ula’s senior, outlived her stepdaughter, but the nature of their relationship after the 1870s is unclear. Another woman became Ula Noble’s companion.

Ula Noble died in 1924 and is buried in Bayside Cemetery in Sturgeon Bay, a GHA biography reports, “next to Louise Schultz, her life-long friend with whom she shared a home [at 736 South Cedar Street] for many years.”

Trailblazers are often hailed as people living before their time. While they may feel vindication through their successes, they also experience frustrations. Had Ula Noble been born 100 years later when feminists in this country were coming into their own, her story might have been different and her life, happier. 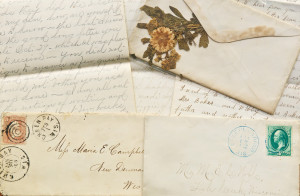 Alan Kopischke became intrigued with Ula Noble’s life when his wife Kärin undertook the project of rendering sketches of costumes for 10 local women who were part of Door County’s history. He was fascinated by the drama of Noble’s life, her romance with her stepmother and her breach with her father, and began editing the collection of her letters written to Maria Campbell Noble. A grant application failed and the editorial progress faltered, but Kopischke plans to continue the work as his free time allows, and hopes some day to write a play based on the feminist’s life.

Trudy Herbst became interested in the biography of Ula Noble because the two women, though separated by more than a century in time, were connected by their membership in the Order of the Eastern Star organization that Noble founded in Sturgeon Bay. Coincidentally, Herbst has a manual of the Order of the Eastern Star that came from the Noble house and in all likelihood belonged to Ula Noble. Herbst researched her predecessor’s life and made transcriptions of several of the letters. Like Noble she also became a Worthy Matron in the chapter. In the past Herbst has offered costumed first-person accounts of the early feminist’s life.

“I think she was a woman ahead of her time,” said Herbst. “She should have lived a century later.”

In one of her letters to Maria Noble, Ula Noble wrote of her intention of making a “waterproof” [raincoat] as a gift, and then in her code asks “wigery yougery kigery megery whengery gegery itgery ongery,” presumably translated as “Will you kiss me when [you] get it on?” Other phrases occasionally appear in the letters using the same code.