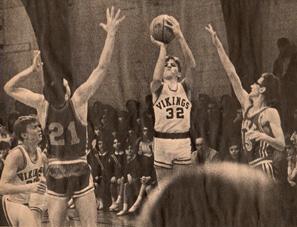 Four times in the past four decades the Gibraltar boys basketball team has finished an entire season without a victory. In 1968-69, the Vikings couldn’t lose. 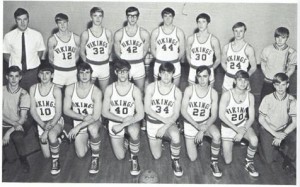 Gibraltar’s cozy Old Gym was a raucous hotbox back then, with fans spilling over the sidelines and piled deep on the stage. The suffocating atmosphere was made even more confining by the team’s vaunted full-court pressure defense.

“We were tough anywhere, but we were almost unbeatable at home,” Voskuil said. “We might have lost less than five games there in my three years.”

Today the gym is used only for freshman and middle school games. It’s hard to imagine staging a varsity game on a floor without enough space for a foot to stand between the cinderblock wall and the end line. The floor is so small that it actually had two half-court lines, one for each direction the offense was headed.

Mike Peterson, a 25-year-old coach in his second season on the job, hammered home a defensive mentality in his troupes.

“We were extremely quick,” Peterson said. “Great athletes. Even our big kids were track stars.”

“We pressed almost continuously, right from the get-go,” said Mark Lautenbach, the team’s starting center. “Defense was coach’s thing. That and to be a team. The first day of practice he brought in a case of shoes, black Converse All-Stars. He said we were all going to wear the same shoes. Everyone wore white shoes back then, so we looked goofy. We all got laughed at the first time we came out. But it made us a team. He was hard on us. Brutally hard on us. But we loved him.”

The local boys got a huge boost in 1967 when Voskuil moved to the district from Green Bay. The skinny sophomore with the soft touch promptly began lighting up scoreboards. He said he made fast friends with point guard Keith Anderson.

“Pass me the ball, and I’ll make you a star,” Voskuil told him. His new teammate obliged, thousands of times. In three years Voskuil scored 1,464 points in just 60 career games, an average of 24.4 points per contest.

Four decades later only two players have surpassed Voskuil’s total, recent Southern Door stars Derik Hawkey and Nathan Vogel. Neither came close to Voskuil’s per game average, however, and both had the advantage of longer seasons and an extra year on the varsity squad. Many old-timers point out that Voskuil didn’t have the advantage of an aspect of today’s game not yet invented in his day, the three-point line.

“Nobody would be close to him if he would have had the three pointer,” recalls teammate Paul Woerfel. “He scored a ton from outside.”

When Voskuil set the county record for points in a game versus Sevastopol in 1968, he didn’t shoot a single free throw. He scored 46 points on 23 field goals, and the wrap-up in the paper said all of his shots came between “15 and 30 feet out.”

Woerfel was part of a starting five that included Anderson and Dennis Krishka, two lightening-quick, ball-hawking guards who could handle the rock. The duo wreaked havoc on opposing guards and helped force opponents into more than 20 turnovers per game.

Lautenbach, the 6’3” center, rounded out the lineup and was one of the best players in the area, averaging 14 points and nine rebounds. Peterson said his athletic ability was key to the team’s fortunes. Eugene O’Brachta, Paul Becker, and Don Freix were the team’s top reserves.

On offense, the game plan was simple – get points off turnovers, and go to the strength.

“Coach Peterson was smart enough to tell you exactly what he wanted – get the ball to Voskuil,” Woerfel said. O’Brachta and Lautenbach handled the glass, and Krishka and Anderson were excellent ball-handlers, but Woerfel says it was clear what made the team go – Voskuil.

The season was not untouched by sadness. With two games remaining in the regular season, Gibraltar was jolted by the death of three students in a car accident. One of them, Loren Vertz, was a reserve on the boys basketball team, and the tragedy also took the lives of students Tom Wilkus and Nancy Overby.

“How can I even get them to practice this week?” said coach Mike Peterson in a Door County Advocate article in the wake of the tragedy. The team fought through heartache to close out the unbeaten season, but didn’t quite have enough left for a post-season run.

In the pre-class era, when all schools, regardless of enrollment, were funneled through one state tournament, Gibraltar faced Sturgeon Bay in the first round of the post-season. The Clippers were loaded, and though Gibraltar took a nine-point lead into the half, they couldn’t overcome Lautenbach’s ankle injury and a loaded Sturgeon Bay squad, spear-headed by Mark Ostrand.

The Vikings season came to an end, 52-46, just the second time all season a team managed 50 points against them. They avenged the loss the following season, then went on to shock Green Bay West in the sectional semifinal before bowing to a tough Kewaunee team in the sectional finals.

“It was really an unhappy ending,” Peterson said. “We didn’t even have much chance to practice because we were going to funerals.”

“It was terrible,” Voskuil said. “I think about that game to this day.”

Lautenbach and his teammates maintain that they would have gone on to Madison if today’s tournament setup were in place back then.

“If we had a class system, I don’t think anyone would have touched us in 1969,” Lautenbach said.

County history will have to suffice.