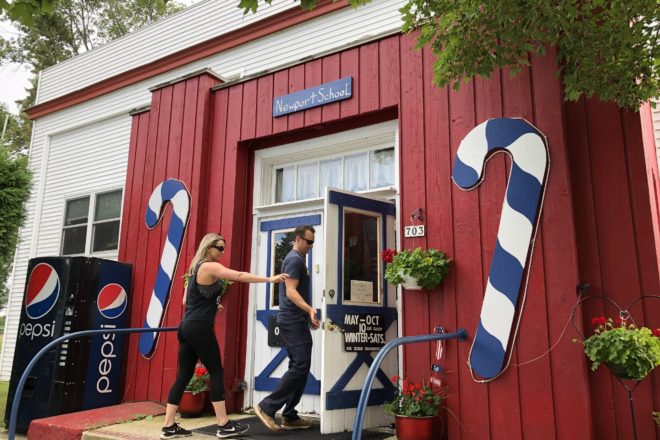 by Craig Clayton for the Peninsula Pulse

Carrying bags full of tasty loot, a 40-something brother and sister, their spouses and their mom strolled out of Uncle Tom’s Newport School Candies.

“I have peanut brittle, pancake mix, milk-chocolate caramel-cashew sea-salt bark …” said Val (Stahl) Edwards of Sister Bay as she approached her father, who was waiting in a minivan with its doors flung open.

The spouses and Val’s brother, Brian, of Wausau, started listing what was in their bags, too.

“If you want the good, old-fashioned candy, this is it,” said Val, who grew up in Newport State Park, where her dad, Harvey (the man in the van), resided and served as park superintendent for two decades.

The Stahl kids regularly rode their bikes to the store to buy candy from “Uncle Tom” Collis Jr. when they were growing up. It must have been like visiting Willy Wonka.

“He was definitely a character. When you’d come in, he’d sing songs with you,” said current owner Heather Laughlin, who also frequently pedaled to the store from her childhood home in Gills Rock. “We rode our bikes everywhere.”

She recalled Tom Collis as eccentric, entertaining and a “close talker”: a relatively short man who’d talk to people very face to face. He was interested in the people of all ages who came through his door. He’d feed them pancakes in the center room downstairs (or upstairs in the cooler months). When couples came in, he’d perform a little make-believe “re-marrying” ceremony, saying “I bless your vows,” said Sue Daubner, who was working the candy counter on Labor Day.

Surrounded by meadow and pasture, the store is about five miles from Ellison Bay and three miles from Gills Rock and Northport, and it continues to bring back longtime customers and neighbors. But despite self-nicknamed “Uncle” Tom being gone from this earth since 1990 and despite the remote location at Europe Bay and Timberline roads, the shop in an old schoolhouse has also been attracting new customers and online shoppers in recent years.

Just after the Stahls left the store, Juris Benitez of Chicago, her husband and their three children, ages four to nine, were all smiles as they walked out of the schoolhouse and tore wrappers from treats ranging from dark-chocolate cherry bark to jawbreakers and warm, sweet-and-sour, miniature imitations of Icee drinks.

“We’re staying at the campground, and the lady who runs the [Wagon Trail] told us we had to take the kids to Uncle Tom’s,” Juris said.

There’s more to the shop than the wide variety of homemade and unusual, shipped-in candies.

A plaque outside notes how, by proclamation, Wisconsin changed Mother’s Day to Womanhood Day in 1979 after lobbying by the enthusiastic and politically conscious Uncle Tom. His words appear on a sign near the plaque: “Whenever a woman is involved in something, I know it will turn out well.”

Inside the double doors, a wide stairway is filled, shelf-like, with artifacts from the schoolhouse years: 1911 until the 1950s, long before Northern Door students were bused to Ellison Bay, and later Sister Bay, and after that, Gibraltar in Fish Creek.

Down the stairs and to the right, there’s a small museum with photos of the original owner, a sketch of the original schoolhouse layout (classrooms upstairs; lunch room, kitchen and restrooms downstairs), and farther back, a room filled with photos and memorabilia reflecting Laughlin’s Gills Rock and Weborg family heritage.

There’s a newspaper clipping showing her husband, burly Jim Laughlin – originally of Illinois, who moved to Ellison Bay while still in school – helping to haul in nets while working on a whitefish fishing boat operated by Mark Weborg. There’s also a newspaper clipping of a career-threatening hand and arm injury to Mark, Heather’s dad. Mark’s still working and copes with the pain.

“If you’re going to date my daughter, you have to get a job” is what Mark told Jim when Heather was still in high school. Jim took the job and enjoys the work on the boat, Heather said. “He likes to be outside. It’s nice being out on the water. You take for granted how beautiful Door County is.”

Although Jim landed a job he enjoys, the couple sort of “fell into” buying the store and moving in – after building an addition on the back. Uncle Tom’s longtime neighbor and business partner, “Aunt Marge” Larson, became the proprietor after Tom’s death and ran the business from 1990 until 1997. Collis had a house south of the store and had been married to a woman who did not enjoy northern Door County. “Aunt Marge” lived nearby and did enjoy the area and working at the store. The Laughlins found out the business was for sale by Marge and bought it.

Laughlin grew up above her parents’ Top of the Thumb gift shop across from the smoked-fish shop in Gills Rock, so she had no problem with mixing business and home life. Marge taught her to make peanut brittle and candies (fudge was the hardest to handle – the least forgiving), and now Laughlin makes more products than Marge and Uncle Tom did. She also stocks a wide variety of candies – and novelty stocking caps – to further the shop’s one-of-a-kind flavor.

“I try to find different products that other places don’t carry, even though we’re small,” she said.

Laughlin found it to be ideal to have her own business where she could work and raise children without having to send them to day care. Their youngest is 17 now, and Laughlin is looking forward to a winter vacation or two in the years to come. As it is now, she cooks and stocks products all winter for online sales and Saturday-only hours. A sign on the door notes that the store can open up if people ring the doorbell at a decent hour in the winter.

“I’ll wait on customers in pajamas,” she said. In the summer, she mostly works in the kitchen.

“I enjoy it. It’s fun. I like my ladies. They keep me in control – pretty much,” she said of her employees.

And Laughlin said they’ve been quite busy lately.

“These last three years, my feeling is Sister Bay has become so popular, people are coming farther north,” she said.

The business also promotes other area businesses: The staff members at Uncle Tom’s send people to the Shoreline restaurant in Gills Rock or Ellison Bay eateries if people ask where to dine, said Carol Kostka, a candy maker and shop employee. In addition, she gives the Pioneer Store a plug – or Bea’s Ho-Made Products, the Wagon Trail or Rowleys Bay Resort – and those businesses send people to Uncle Tom’s.

The popularity of peaceful Europe Bay Beach (Hotz Park) at the east end of Europe Bay Road, about a mile east of the candy store, has been driving more traffic to (or at least past) lately.

And Uncle Tom’s ethic has never gone out of style: Have a can-do, positive outlook; a desire to greet customers; and a wish for them to leave smiling. Around the store and on their aprons, the staff members display a sentiment promoted by Uncle Tom. He always gave away popcorn, but people had to express their thanks. You actually had to say, “Gratitude is attitude,” or you couldn’t have popcorn.

“Being thankful for what you have is an attitude. If you have gratitude in your life and you’re grateful, I think you will be a happier person,” Laughlin said.

“We get the best customers. Happy. Friendly,” she said. “Maybe it’s the free popcorn.”