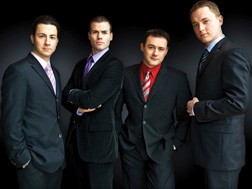 Rock and roll is here to stay in Fish Creek on July 1 and 2, when the golden oldies quartet Under the Streetlamp comes to the Door Community Auditorium. Made up of four recent stars of the Tony Award-winning blockbuster Jersey Boys, Under the Streetlamp joins forces with a first-rate jazz orchestra to breathe new life into old doo-wop ditties, Motown melodies, and Rat Pack favorites.

The four members of Under the Streetlamp met while performing in Jersey Boys, which tells the story of Franki Valli and the Four Seasons. Inspired by playing a band every night onstage, these four gifted performers decided to create their own musical act, and Under the Streetlamp was born.

Between them, the four men of Under the Streetlamp have appeared on Broadway, in feature films, and on television – including special appearances during their Jersey Boys tenure on The Tonight Show With Jay Leno, the Emmy Awards, and The Oprah Winfrey Show.

Tickets for both 8 pm performances range from $45 to $60 and can be purchased at the Door Community Auditorium on Highway 42 in Fish Creek, by calling 920.868.2728, or by visting http://www.dcauditorium.org.