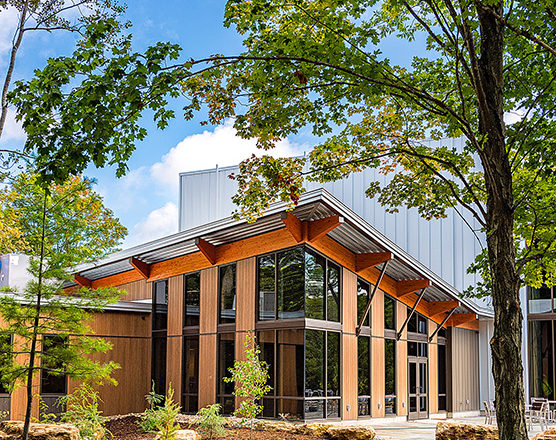 For years, Neen Rock, stage production manager for Northern Sky Theater, would throw a printer in her car among music stands and scripts, drive to a writing workshop during musical-creation phases and set up the gear. The writers would produce some pages of script and make revisions, and Rock would have to throw the printer and other materials back in her car afterward and take it to the next destination.

Actors changed into costume in the middle of the Peninsula State Park parking lot before hopping on stage.

“That’s not the way to sustain a company,” said Holly Feldman, the troupe’s development and public relations director.

For more than three decades, Northern Sky has had a home for performances among the stars and trees in Peninsula State Park, but everything done off-stage was a scramble. Now that’s changing. Don’t worry — the stage in the park isn’t going anywhere, but the constant scrambling and lack of a consistent space in which to rehearse during the fall season led the Northern Sky team to seek out a destination it could truly call its home away from that home in the park.

For Artistic Director Jeff Herbst, the new home was imperative not only for the convenience and ease of the staff and actors, but also for the longevity of the company and the fans of Northern Sky Theater. Herbst has been with the company for 30 years, spending 26 of those as its artistic director, and he said the organization recognized the need for a permanent fall location around 2004.

Too much time was being spent looking for places to do readings or rehearse, and not enough was being spent on the creative tasks at hand. At one point the company was spending $80,000 every year on rental expenses alone, but it took 15 years to bring this project to fruition.

“When all of us have moved on and turned it over to other people, I want to make sure they have a fighting chance at making it continue to thrive,” he said. “That’s only going to be possible if they have a place to do it.”

Melissa Ripp, a Sturgeon Bay native who now lives in Madison, Wisconsin, understands the struggle of working out of different locations. She got her first job out of college at Northern Sky (she still refers to it fondly as AFT, short for its longtime former name, American Folklore Theatre) as its marketing director from 2004 until 2006. She remembers the autonomy she was allowed, the encouragement to learn and the creativity.

She also remembers how hard they all had to try to be easily portable, especially when hosting fall shows in town halls where other events might have been going on throughout the week.

“There wasn’t a lot of latitude to do things differently,” Ripp said. “You only had a set amount of space.”

Northern Sky started its Constellation Campaign in 2017 with a goal of raising $7.8 million. Initially, the company thought a campaign of this scope would be a challenge. It was determined not to overreach, Herbst said, so the original plans for the building were to have a “flex space”: a big room where actors could rehearse, instead of having a theater with seats.

Northern Sky sought advice from other theater professionals who had been through similar building processes. They advised Northern Sky that this was its one big chance to have a campaign of this size, and that in the long run, no one would be truly happy with just a flex space. The company decided to take a bigger plunge, Herbst said.

“It was amazing to all of us how quickly people responded and how quickly we’ve been able to get this entire campaign underway,” he said. “It’s astounding to me, and it’s really humbling.”

Near the end of fundraising, the budget for the project rose when prices for lumber and steel came in higher than anticipated.

“Once again, the community has risen to the challenge and helped us get through that obstacle,” Feldman said.

More than 1,000 donors gave to the campaign in amounts of all sizes. The company welcomed all donations in its effort to complete the new creative campus and to continue offering affordable ticket prices. Accessibility to families is something Northern Sky takes pride in, and it wanted to ensure that tradition continued.

Gifts such as these come from generations of fans who have enjoyed original productions that were written specially for the troupe at Peninsula State Park.

Just for the process of writing, reading and rehearsing the scripts alone, writers and actors had to go to hotel conference rooms, church basements and people’s living rooms. In this new space, writers will be able to sit down, churn out a few pages of script and simply walk them over to the actors to read through in the next room.

“It will really streamline everything we do,” Feldman said.

The outdoor themes and night skies that are central to Northern Sky’s identity heavily inspired the design of the new campus. Architect Peter Tan of Strang in Madison designed the buildings and included several components that remind the staff and actors of their summer home — with a few extra, fun and inspirational additions.

Windows are grouped in twos and threes to resemble black piano keys, accentuating the elements of music.

The theater itself is unusual. Whereas most theaters require a dark space for their performances, Northern Sky’s new theater has tall windows, also grouped in twos and threes, that provide views of the surrounding trees and sky. The ceiling is painted a “celestial blue” color, and the walls are lined with jagged wood paneling.

“You can walk in and almost feel like you’re in a driftwood cathedral,” Herbst said.

For times when the company needs a darkened space — when the shows start — the windows have been fitted with custom shutters. But for daytime rehearsals, the troupe wanted its actors to be able to retain that feeling of being in nature.

“People kind of thought we were crazy to do that, but we knew that the space had to have an element of our home in the park,” Feldman said. “That’s what people were familiar with and comfortable with, and it’s what makes us so different.”

The space at Peninsula State Park — Northern Sky’s theatrical home — hasn’t been forgotten amid this progress and these accomplishments. The company will upgrade to flush toilets this fall and add new concessions, technical upgrades, dressing room renovations and accessibility improvements in 2021.

“That’s our heart and soul out at the park,” Feldman said. “It’s where people know us best.”