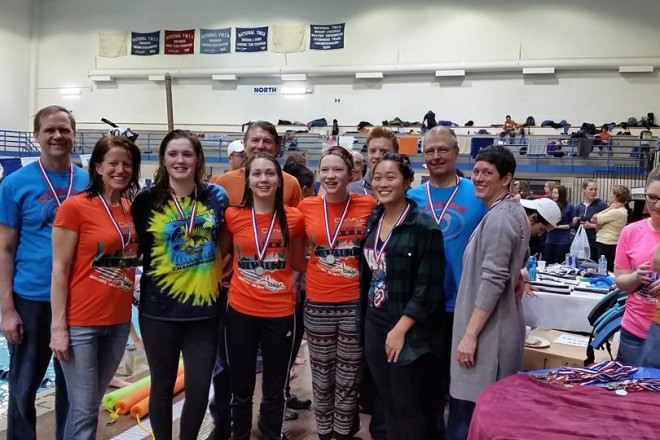 When I told my friends that I wasn’t available on a Wednesday night because I would be playing underwater hockey, they thought I must have misspoke. I assured them I hadn’t.

“I guess it’s like hockey but everything is underwater,” I told them. As the words left my mouth, I raised my own concern for what this might really mean. I’ve never played hockey and I figured my mediocre swimming skills in the sport of triathlon would only take me so far.

Still, the allure of trying a unique sport with one of the best teams in the country was too strong to deny. The Sturgeon Bay Sturgeons have only improved nationally since forming in 2011. The team recently took both second and third place at a tournament in Brown Deer, fielding two teams of six people. In 2015, the Sturgeons took 5th place in the B Division at the national championship in Los Angeles. They have won other regional championships in Milwaukee and Minneapolis.

Standing on the pool deck, one player called over to me as he defogged his goggles.

“Kendall is a legend, and he’ll get around to talking about that,” said Jason Marggraf. “Don’t let him be modest.”

“I played on the national team from 1980 through 2006,” admitted Banks in an email. “I was team captain for all but one of those teams. I have the distinction of being the only person in the world that played in every world championship during those years.”

Banks learned of the sport as a lifeguard and swimmer at the University of Illinois at Chicago in 1977. Since then, underwater hockey has taken him as far as France, South Africa and New Zealand.

When his family moved to Sturgeon Bay five years ago, it was their daughter Molly who planted the seed for a team in their new city.

While on a tour through the Sturgeon Bay YMCA, Molly piped up, “We’re going to start an underwater hockey team here.” The woman giving the tour was Mary Claire McHugh, whose husband, Mike McHugh, is the aquatics director for the Sturgeon Bay program center.

“He heard about it and has been very supportive ever since and helped us get it off the ground,” said Banks.

The team has seen slow but consistent growth since starting and Banks’ goal is just to get people in the water to try it.

“To begin with, the only real prerequisite is just being comfortable in the water,” said Banks. “The rest of it you can figure out.” 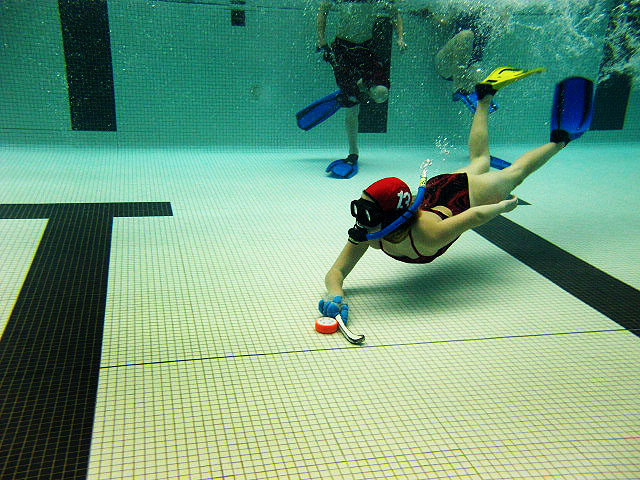 The sport is played between two teams of six. The puck is heavy enough to rest at the bottom of a six-foot pool. Players wear fins to maneuver through the water and a glove to protect their hand while using a one-foot long stick to move the puck along the bottom of the pool. Large metal panels lay on opposite ends of the pool and players score goals by hitting the puck into one.

“The biggest thing for people who are new to it, a big part of it is breath control,” said Banks. “It’s a breath-hold sport but that doesn’t mean it’s about holding your breath for a long time.”

Banks explained that a normal dive is five to six seconds. Instead of holding your breath for a long time, strategic breathing is more important to success in the game.

“Obviously when you’re competing, when you’re down there in the battle for the puck, you’re burning oxygen fast so you’ve got to be able to come up, get some oxygen and get back down. The bottom time that counts is the total bottom time more so than how long you can hold your breath, that’s not really a factor at all,” said Banks.

As someone new to the sport, the hardest part for me was getting used to the snorkel. When a player dives, their snorkel fills up with water, so it is important to clear the snorkel with a strong blow of air when you come up for a breath. With a non-swimmer’s lung capacity, the constant fear of not having air in my snorkel gave me pause.

Meanwhile, Banks effortlessly moved the puck around the bottom of the water and, with a flick of the wrist, sent it floating through the pool ending with a soft thunk against the tiled poolside. 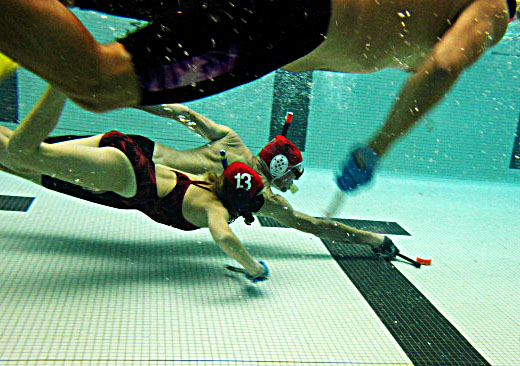 Every Wednesday and Friday night, he passes this skill on to everyone who shows up and the following is getting bigger.

“They started having these tournaments in Milwaukee,” said Banks. “We didn’t know if people would be interested in traveling beyond that but then nationals was in Minneapolis one year so we went to that and now everybody’s kind of getting in the mode.”

Banks is hoping to field a team in a championship event in Orlando this spring, but is content with more new faces showing up to the pool. Banks runs a 12-week kids camp right after swim season ends in the spring and those kids are invited to play with the team on Friday nights.

“The ones that really dig it come and are willing to take a little more size differential,” said Banks.

The Sturgeons hold practices on Wednesday and Friday at 6:30 pm at the Sturgeon Bay YMCA. All are welcome to attend and there is no equipment necessary.