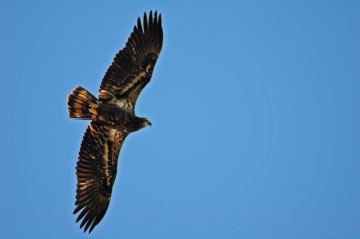 Have you looked closely at slabs of exposed limestone, stacks of rock talus, piles of sand, swaths of sandy-gravely soil along the lakeshore, stretches of thin patches of soil over flat beds of limestone/dolomite, wide expanses of thick perpendicular tree branches, and into centimeters of water in cool slow moving streams? These features in Door County provide homes and breeding grounds for a host of threatened and endangered species, including the land snail, the Hines Emerald dragonfly, the bald eagle, the goshawk, and the dwarf lake iris, among others.

These habitats are often taken for granted because they look like useless piles of rocks, swampy messes, or areas hazardous to recreation. The abundance and uselessness of these unique habitats is the very reason the rare species are able to continue to survive in Door County. However, the most rocky, water-saturated, densely-forested landscapes are often seen as having development potential with a few minor improvements such as clearing cliff ledges and filling wet lowland areas.

The Niagara Escarpment in Door County provides the largest number of unique habitats that support more endangered and threatened species than any other county in the state. Rock faces and ledges, caves, sinkholes, crevices, talus slopes and alvar communities are associated with the escarpment. In 2001, the Bureau of Endangered Species from the Wisconsin Department of Natural Resources completed an inventory of species associated with the Niagara Escarpment.

The inventory revealed that from the millimeter land snail to the alvar community scale the Niagara Escarpment in Door County is home to over 41 state threatened or endangered species and four federally endangered species, making it the most biologically diverse county in the Midwest.

Most Door County residents and visitors have passed by the most rare and globally imperiled species without even knowing it. Land snails are only a few millimeters in size and they depend on the cool, moist microhabitats created by the rocky cliffs and slopes of the Niagara Escarpment. They were widespread during the last ice age and now they are found only in the Midwest.

Door County supports the largest population of Hines Emerald dragonflies within their range. The dragonflies are dependent upon groundwater-fed pools that are usually found above the area’s dolomite bedrock. Hines Emeralds spend two to three years propelling themselves in water as nymphs and only a few months flying as adults. The only other populations are found in remote locations along the Des Plaines River in Chicago, IL.

A once rare wildlife sighting in the 1960s, with only 450 breeding pairs remaining in the United States, the bald eagle has made a comeback with a current population of over 5,700. In recent years, bald eagles have often been seen in Door County perched on tree limbs, hunting for fish, building nests, locking talons with other eagles during in-flight battles, and raising fledglings.

White pine trees, essential to the bald eagle for nesting, once covered much of Door County and the northern half of Wisconsin. Favored by Europeans in the 1700 and 1800s for making ship masts, the majority of mature white pines were cut down. Some mature white pines still remain in Door County scattered in wilderness reserve areas. White pines have large, strong branches that grow perpendicular to the trunk providing a perfect platform for eagle nests. Eagles are known to make several stick nests weighing an average of two tons each. Their nests are located in very remote areas near water and all within a radius of a few miles. They return to the same area and rotate the use of these nests every year.

In the spring eagle fledglings can be seen getting flight lessons as they are pushed out of their lofty nests. However, the presence of humans near their nests causes them to leave their eggs and fledglings unattended, and to waste energy that is essential to providing food for their fledglings. It is important to respect the eagles’ nesting space by keeping a distance using a good pair of binoculars. The best place to view an eagle’s nest is from inside a car, which acts as a bird blind.

Although the bald eagle population has been considered fully recovered since 2000, there are still threats to maintaining their numbers. As the popularity of shoreline development continues to increase, finding quiet places with white pine trees along the water’s edge is becoming more difficult.

The goshawk is another rare species in Door County. Like the bald eagle, they inhabit the area’s mature forests. Goshawks play an important role in maintaining raptor populations. They build three to nine large nests in their breeding territory, but they only use and defend one nest per year. Their other nests become home to raptors that cannot build their own nests, such as the Great Gray owl, the Cooper’s hawk, the Red-tailed hawk, and the Great Horned owl.

Door County also has a globally rare community that is found only in North America along the shorelines of the Great Lakes. Alvar, a community of patchy soils that lay on top of horizontal beds of limestone or dolomite, supports diverse plant communities including rock pavements, prairies, oak savannas, and boreal forests. The alvar community is also home to the federally endangered dwarf lake iris, which is only found in the western Great Lakes region.

The habitats that support these species are easily disturbed and are impossible to replace in our lifetime. These habitats are also easily overlooked because they include the piles of rocks, swaths of mucky soils, cliff faces, and sandy shorelines. The most effective action that can be taken, therefore, is habitat protection.

While visiting the county you can protect threatened and endangered species by support land conservation organizations and by helping to stop the spread of invasive species that take over and alter the native habitat. Remove plant seeds from your shoes and camping equipment before leaving a site, and remove the aquatic vegetation and water from your watercrafts before transporting them to another area. You can also help monitor invasive species by reporting them to the Door County Invasive Species Team (DCIST) by calling (920) 746-2214 or reporting on the web by doing a search for DCIST.

There are many considerations in planning for the future growth of Door County, but one that cannot be overlooked is our responsibility to be stewards of the most biologically-diverse and habitat-rich county in the Midwest. Support the protection of the Niagara Escarpment as an ecologically important area by participating in planning, zoning and ordinance creating efforts in your community.