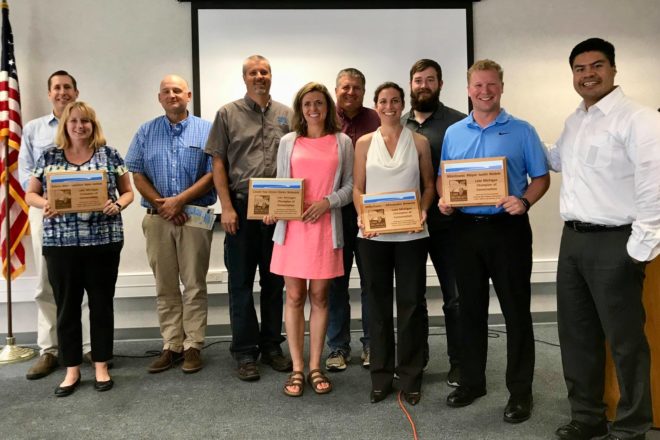 If there was one overriding takeaway from the 5th Annual Lake Michigan Day Conference held at the Wisconsin Maritime Museum in Manitowoc on Aug. 10, it is that there remains in these divisive political times bipartisan support for conservation efforts in the Great Lakes basin.

However, one of the speakers, Mike Carlson, executive director of Gathering Waters, addressing one of the conference themes – “Challenges We Face” – said that support for the Great Lakes should not been taken for granted, especially in light of recent budgets from the Trump Administration that zeroed out EPA funding of the Great Lakes Restoration Initiative (GLRI), only to have it refunded by Congress.

Carlson reminded the group – many of whom represented ecologically minded groups, including Greg Coulthurst of Door County’s Soil and Water Conservation Dept. and several members of Door County Land Trust – that along with engaging citizens, interest groups and businesses, to “always think of outreach to elected officials.”

Carlson also advised attendees to make their voices heard in the third phase of the EPA’s GLRI Action Plan, covering fiscal years 2020-24. The EPA held a public engagement session in Milwaukee on July 18 and plans sessions in Chicago and Saginaw, Mich. The proposed plan is expected to be available for public comment in the fall.

Todd Holschbach, director of government relations for The Nature Conservancy, reiterated Carlson’s message that the current President and his administration are “problematic” for GLRI and the Land & Water Conservation Fund, which, without Congressional action, will expire on Sept. 18.

Holschbach also pointed out that although Congress has come to the rescue of GLRI, “This could all change.”

Democratic Sen. Tammy Baldwin, who faces an election challenge from 5th District State Senator Leah Vukmir, sits on key committees and is a huge champion of the two initiatives.

Holschbach added that with the imminent retirement of House Speaker Paul Ryan, the country is losing the “safety valve” Ryan provided for GLRI by working with others to keep it funded.

Tawny Mata, director of Strategic Engagement for Blue Accounting, outlined this relatively new alliance building and data collection effort that grew out of the 2013 Conference of Great Lakes and St. Lawrence Governors and Premiers, where it was decided a comprehensive approach was needed to the complex web of issues facing the Great Lakes basin.

Mata said more than 73 different organizations have come together in the first Blue Accounting efforts in areas as diverse as marine transportation and phosphorus control. The idea is that by bringing together different levels of government and agencies working on these issues, best management practices are identified and focused.

“We’re early on in this process,” she said. “This is an experiment.” She added that Blue Accounting plans to do its first large-scale “information dump” in November.

Dylan Waldhuetter, program manager for the Alliance for Water Stewardship North America, explained the organization’s AWS Standard, the first comprehensive global standard for measuring water stewardship across economic, environmental and social criteria. MillerCoors Milwaukee Brewery became the first brewery in the world to achieve the AWS Standard, which is why the brewery was named for a Lake Michigan Champion award.

The final speaker of the day was Steve Galarneau, director of the Office of Great Lakes, Wisconsin Department of Natural Resources, who talked about why the GLRI makes sense for the incredible resource and “huge economic engine” known as the Great Lakes.

Galarneau talked briefly about the regional collaborations and common vision among Great Lakes stakeholders that resulted in the first GLRI funds in 2010. He said Wisconsin is second only to Michigan in the number of GLRI projects that have been undertaken.

“GLRI gives us the opportunity to really take action,” Galarneau said, so the various entities agreed on a strategy. Forty-three areas of concern (AOCs) were identified throughout the Great Lakes basin. Galarneau described them as the worst sites, contaminated with industrial waste that includes PCBs, heavy metals and a host of other challenges. Five of the sites are in Wisconsin – the St. Louis River in the twin ports of Duluth-Superior; the Milwaukee estuary; Sheboygan; Green Bay; and the Wisconsin side of the Menominee River.

Galarneau said significant progress has been made at each Wisconsin site, and not always solely with GLRI funds, but with GLRI funds accelerating the process. He talked about removing 175,000 cubic yards of PCBs in Milwaukee’s Lincoln Park area, along with habitat restoration, invasive species eradication and native species planting.

“This is right in a very urbanized area. Connectivity to the community is huge,” Galarneau said.

He said the Sheboygan AOC was the biggest beneficiary of GLRI funds.

“We were ready,” he said. “We knew what kinds of things we wanted to get done and when funding became available, we were one of the areas ready to take off on that.”

The Green Bay AOC was the largest of all the PCB cleanups. “It’s just a gigantic PCB cleanup,” Galarneau said.

He was particularly impressed with the “wicked cool” Cat Island Restoration Project, which underscored partnerships with a variety of agencies, including the University of Wisconsin-Green Bay and The Nature Conservancy. A long list of projects was prioritized for the restoration effort, involving reconstructing three islands providing 272 acres of habitat for a wide variety of animal life. The islands were built from sands dredged from the navigation channel, and, Galarneau pointed out, will continue to be cost-effective place to deposit the dredged material for several decades.

Referring to the dead zone in Green Bay, Galarneau said it’s really a very tiny concern compared to the very large basin, however, efforts are already underway to engage farmers and communities in reducing phosphorus runoff.

Best of all, Galarneau said, the Menominee River site is “on track to be Wisconsin’s first AOC to be delisted.” This is exciting news, he said, because it “helps assure we have bipartisan support. AOCs are showcase items in Washington.”

The conference ends with awards being given to the Lake Michigan Champions of Conservation. This year’s winners included Rep. Joel Kitchens, who was recognized for a variety of clean water efforts, as well as championing the Knowles-Nelson Stewardship Program, as well as his bill to ban the manufacture and sale of plastic microbeads in Wisconsin. Kitchens was unable to attend the conference but sent both a representative from his Capitol office and a video.

MillerCoors was recognized for implementing the AWS International Water Stewardship Standard. University of Wisconsin-Manitowoc biology professors Rebecca Abler and Richard Hein were recognized passion for education and inspiration to students in environmental awareness by starting a water sampling program, that eventually led to the creation in 2012 of the Lakeshore Water Institute.

The Lower Fox Demonstration Farms Network – a GLRI-funded program – was recognized for spawning “a movement in the region to adopt progressive farming practices that improved the landscape and water quality.”

Three-term Manitowoc Mayor Justin Nickels, who was the youngest full-time mayor in the United States when he was first elected to the job in 2009, was also recognized for being “a proud and consistent champion of the beautiful lake that borders his city.”