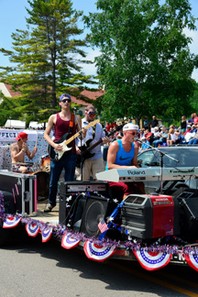 A little older and wiser, Unofficial performed a few songs at this year’s Fourth of July celebration in Baileys Harbor. Photo by Len Villano.

“We were the classic high school garage band, four friends learning to play our instruments,” smiles Emanuelson. “Friendship came first, the band came next. We always practiced at Clark’s house and hung out.”

The boys called themselves Unofficial and played their first public set at a school talent show. “We had fun and kept doing it. We played for three summers – homecoming dances, post-prom parties, friends’ parties, Fyr Bal, Baileys Harbor’s Fourth of July.”

Unofficial performed a variety of covers – from Franz Ferdinand to Green Day to Prince – and a slew of original songs. “The very first song Matt wrote was called ‘That One Girl,’” laughs Emanuelson. “I can’t talk about it without cringing. Our originals are embarrassingly bad, so cheesy – the first songs we ever wrote. I wrote ‘The Late Song,’ which is about me always being late.”

Though the band members may look back and laugh, they were obviously talented – they won runner-up two years in a row at Launchpad, a music competition for Wisconsin high school students who are in bands formed outside of school.

A few members of the band even continue to perform and pursue careers in music. Burress recently graduated from McNally Smith College of Music in Minneapolis and regularly performs with other local musicians throughout Door County; Emanuelson spends his winters in Austin, Texas, performing with the pop/punk band Bear Suit Sucker Punch; Lundquist plays in a successful cover band called The Whistle Jacks in La Crosse, Wis.

“We had not played together since 2007,” admits Emanuelson. But after a six-year hiatus, Unofficial decided to reunite at The Sister Bay Bowl on Friday, Aug. 16 and celebrate the music of their youth.

“This reunion show came about when Matt posted lyrics to one of our songs on Facebook,” says Emanuelson. “And we were like, ‘Remember the good old days.’ It was nostalgic – it’s been six years!”

They reconvened at Lundquist’s house and played through a song. “We nailed it,” laughs Emanuelson. And though the individual members have “changed a lot in our musical tastes,” says Emanuelson, “we will play what we did in high school – simple, fun rock songs. It’s a reunion show.”

Take a walk down memory lane with Unofficial at The Sister Bay Bowl, located at 10640 N Bay Shore Drive in Sister Bay. The band will begin at 10:30 pm; there is no cover charge.