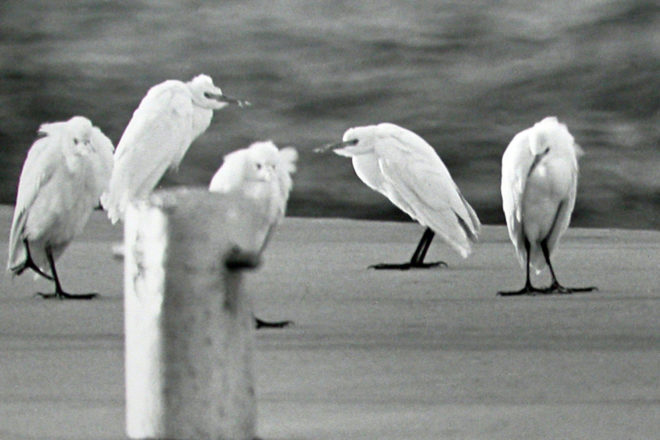 Here stand five of the nine wind-blown cattle egrets that were seen on the Gordon Lodge pier on Oct. 27, 1978. Photo by Roy Lukes.

A local birder reported seeing a single cattle egret in a field in central Northern Door in late October this year. Birders are always on the lookout for unusual species that may be visiting briefly on their southward migration in the fall.

When my late husband, Roy, and I lived at The Ridges Sanctuary’s Upper Range Light, we received a call in October of 1978 about an uncommon bird that had been spotted at Gordon Lodge, north of Baileys Harbor along the Lake Michigan shore. It was a white pelican. Three days later, the person called again to say there were nine cattle egrets on the Gordon Lodge dock. Roy quickly drove over there to photograph them.

A woman living in Clay Banks along Lake Michigan reported seeing three cattle egrets on Nov. 6, 1979, that were feeding on the ground with some cows. A few days later, she approached them on horseback and got to within 10 feet. She took a few photos and noticed they were eating earthworms.

Cattle egrets nest sparingly in Wisconsin. The first Atlas of Breeding Birds of Wisconsin showed confirmed nesting along the western shore of Green Bay and in Horicon Marsh, farther south in Wisconsin. Documented nests have been found in Brown, Oconto and Winnebago counties.

These birds are native to Africa and migrated to Florida by 1941 via the West Indies and South America. They were found to be nesting in Florida by 1953 and now are seen in all but six of the lower 48 United States. Some have also been seen in Alaska!

Cattle egrets tend to follow large animals in grasslands, where the animals’ feet stir up insects and other invertebrates that the egrets eat. They also ride on the large creatures’ backs in order to search for a meal of insects on their skin.

A friend who had a home on the south side of the Mink River reported another rare sighting. It was a time of low lake levels, so the entrance to the river was mostly mud, with a few isolated pools of water. He and Roy put on knee boots and walked out on a cold, windy day in late October 2001 to photograph an American avocet. The Wisconsin records for this species said that it had been reported only twice before: in Brown County in 1879 and in Dodge County in June of 1973. That sighting was a nest with three young.

A bird that’s most common to the Pacific Northwest – the varied thrush – has been found here generally during the winter. It’s a robin-like bird with similar colors, but the male has a dark-brown, horizontal band across its orange upper chest; orange wing bars; and a small, orange stripe above and behind its eye.

This species sometimes spends the entire winter here. We had one in our yard, and birders even came from southern Wisconsin to see it. This thrush nests in conifer forests in Washington, western Canada and well into Alaska.

Occasionally a Townsend’s solitaire has been seen in Door County. This is another bird that lives in the western mountains and nests in coniferous forests. It may be that young birds, being forced to find their own territory, get caught up in the jet stream and are blown into the western Great Lakes region.

Roy was a federally licensed bird bander for about 25 years. He and Harold Wilson were good friends and attended many Inland Bird Banding conventions together in the late 1960s and early 1970s.

Harold and Verna Wilson invited us to stay with them in March of 1975 in a home they had rented from a friend in the middle of a citrus grove west of Vero Beach, Florida. Harold had his nets set up and banded numerous painted buntings, and Roy was able to photograph these spectacularly colorful birds.

On Nov. 27, 1983, we were cutting firewood and stacking it inside our newly built garage, and we left the big doors open while we worked. Upon entering the garage, I noticed a small songbird flitting up against the north window. I thought it was a goldfinch.

Roy went in to see and was able to grab the bird gently as it hopped to the floor. He took it outside; asked me to take some photographs of the very strange, green bird; and once it was photographed, he released it. Later we checked the bird field guide and found that it was a female painted bunting!

When we related the story to friends, they laughed and said, “Well, how nice that it flew into Roy Lukes’ garage!” We smiled and said that the bird was really looking for Harold Wilson in Ephraim!