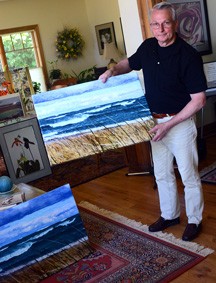 A vast variety of Young’s photographs are on display in his home, some untouched by Photoshop, others unrecognizable from the original image. Photo by Katie Sikora.

“I want to do unusual things,” says Young of his art. “My goal is to make a photograph look like a painting, either a watercolor or an oil painting.”

Over lemonade and poppy seed muffins, Young and his wife, Jean, gesture to the walls of their home overlooking Lake Michigan – essentially a gallery of Young’s photography throughout the years. A photo of Cana Island Lighthouse peeking through the treetops hangs on one wall, a flock of seagulls playing in the surf on the other, there are also sunsets, butterflies, flowers, a wooded trail layered in golden and red leaves, and many more featuring subjects and landscapes from as far away as London, as nearby as Madison, and of course, Door County.

“I had to stop taking pictures,” laughs Young, alluding to the walls covered with his images.

The couple moved to Door County as permanent residents 10 years ago – after 50 years of visiting the peninsula for summer vacations.

“We’ve lived 10 places [throughout the Midwest],” explains Jean, “and for the kids this was the one constant.”

The ‘kids’ have grown up, are raising their own children and reside throughout the Midwest, visiting the Youngs and their childhood vacation spot as often as they can. 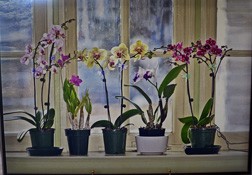 “I want to do unusual things,” says Young. “My goal is to make a photograph look like a painting.” Photo by Katie Sikora.

Ray’s childhood was spent near Chicago, where he remembers his father handing him an 8mm movie camera. “They wanted me out of the house,” laughs Young. “I remember I went on a trip with my grandmother and took movie pictures – some didn’t turn out very well – but you learn from doing.”

Though primarily focused on music (Young started piano lessons at four years old), he dabbled with photography as a young adult, experimenting in a dark room he created in the basement of his parents’ home.

“I tried my hand at developing, enlarging, and vignetting,” says Young. “My high school history teacher was really into photography. There were three or four of us who used the dark room [at school] and had pictures in the yearbook.”

“So music and photography I’ve always enjoyed – but music was the highest priority,” he says. “I wanted [music] to be my profession. If we had the electronics we have today in the ‘50s, I would have been in a rock band.”

“Everywhere we lived, Ray played music,” says Jean. He played for friends’ weddings, performed during the interludes of concerts, and even put together an orchestra for a community’s production of Hello, Dolly!

In 1997 he released a CD, Reflections. “My daughter Susan plays it for her kindergarten class when they get wild, puts them to sleep,” laughs Ray. He is currently working on a Gershwin CD featuring his own arrangements.

Young found success in his professional career in banking. “Everything compounded itself, I could finally have my own business. I developed a product for banking and did well,” says Young.

“I turned back to photography when Jean had a stroke,” he says. John and Darlene Harmann of Harmann’s Photography Studios encouraged Young’s pursuit. “‘Ray, you gotta get away from film and go digital,’ John told me,” explains Young, who dipped into some savings, started snapping digital images and fiddling with Adobe Photoshop. “Digital is amazing!” he says. 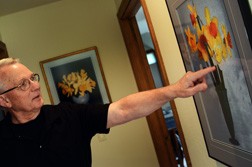 Ray Young describes his methods of manipulating photos to achieve a particular look and feel. Photo by Katie Sikora.

Eventually, his hobby received praise and attention from a very well known Door County arts figure – Abe Cohen. “I stopped by Abe’s gallery, The Potter’s Wheel, just to see what he thought. ‘Let’s hang ‘em,’ he said,” says Young. “I was shocked.”

“Life takes interesting turns – depends a lot on other people and how they help you and give you support,” he continues. “A lot of people mentored me through it. No one really does everything on their own.”

What Young does do on his own is pick and choose the photographs for manipulating, deciding where to take the image – adjusting contrast, hue, saturation, depth of lighting, shadows, and more. “The process can take up to 15 to 20 steps,” says Young. “I might have 15 files for one image.”

Each image takes Young down a different track; therefore each final piece offers a unique look and feel.

“The pleasure I get from this is when other people get pleasure from what I do,” says Young. “I want to create something that gives other people happiness – that’s the reason I do this.”

The R.C. Young Collection of Creative Photographic Styles will be on display at Stone Harbor Resort in Sturgeon Bay from August 2 – September 14. A reception, open to all, will take place August 5 from 1 – 5 pm and include light refreshments. Co-hosted by Harmann’s Photography Studios, the pieces on display as well as Young’s CD, Reflections, will be available for purchase.

Young’s work is also on display at Bliss in Sturgeon Bay and periodically at The Potter’s Wheel in Fish Creek.