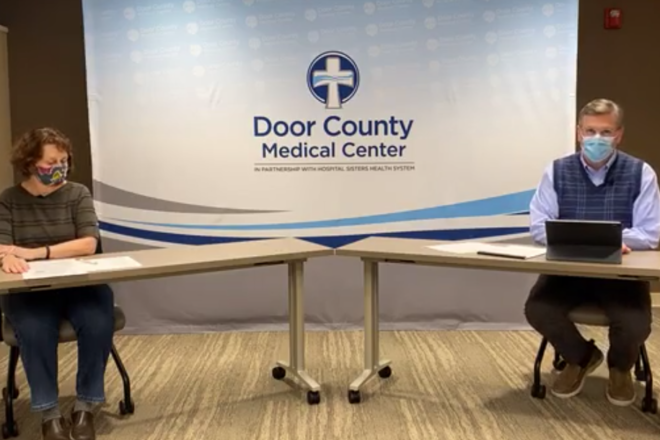 Door County Public Health Officer Sue Powers and Door County Medical Center’s Dr. Jim Heise held Facebook Live sessions every Monday evening throughout the season. The two became leaders in the fight against COVID-19 through their efforts to change behaviors and perceptions to minimize community spread of the disease.

Door County reported 38 positive COVID-19 tests during the week ending Aug. 12, its most since March.

Door County Public Health Manager Sue Powers said that to her knowledge, all of those cases were among unvaccinated individuals. Two were hospitalized.

“We have had only a couple of examples of cases among vaccinated individuals,” Powers said.

On the positive side, the rate of vaccinations continues to rise. Powers said the county vaccinated more people this week than they have since late June. Most of those people vaccinated are local residents, though some are summer workers from outside the county.

“I don’t want to keep going through this,” Powers said of the spikes. “I just hope that people get shots so we don’t have to deal with this in the fall.”

The department has picked up contact tracing again, and will expand to twice-weekly reporting next week. Powers will join Dr. Jim Heise for a Facebook Live update on the Door County Medical Center Facebook page Monday, Aug. 16.