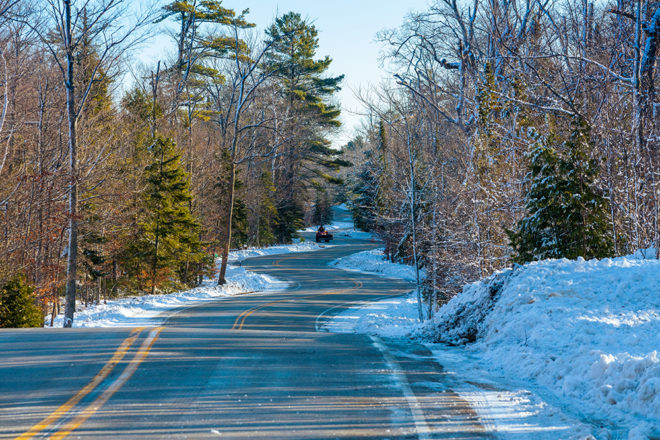 Why does the curvy road curve? That’s a question that everyone who drives it asks, including Dick Purinton of the Washington Island Ferry Line, who dug deep in search of the answer. Photo by Brett Kosmider.

This story first appeared in the column Ferry Cabin News in the Washington Island Observer. It is reprinted here with permission.

Have you wondered – as I have while hurrying to meet the ferry – why the northernmost portion of Highway 42 that leads to Northport pier has so many curves?

I had formerly believed that the road was intentionally made to wind around the phone poles in the center of the road. While that may have been one possible explanation, it was simply conjecture on my part – a conclusion obtained by comparing the road in relationship to the poles.

I found out there is more behind the story. Those telephone poles that resemble slalom gates in a downhill ski run were removed in 1986, with new poles set within an easement north of the highway, paralleling the power line that takes electricity to Washington Island.

Frequent ferry travelers and commercial truck drivers delivering goods to the ferry have come to accept the series of curves, if for no other reason than it’s been that way for decades. Yet for many visitors, those tight curves are unique features for a state highway, and in sharp contrast with the straight and sometimes monotonous highway miles found elsewhere. As a consequence, this curvy portion of highway has received a significant amount of attention in recent years.

The Northport road offers photogenic qualities, especially in the fall, or when a light winter’s snowfall accents the curves, and it’s not unusual to witness multiple autos parked along the upper shoulders of the roadway, its drivers venturing out on the pavement to capture a photo.

Photographers have also been observed lying prone in the road, seemingly oblivious to traffic dangers as they straddle the centerline. Overhead drone images have also been published by the local media and used as traveler enticements in Destination Door County literature.

Captions associated with this winding section of highway have often credited Jens Jensen, a nationally known landscape architect of the early 1900s, and the founder of The Clearing Folk School in nearby Ellison Bay.

It is this claim that Jensen was responsible for the road’s curves that aroused my curiosity. I wanted to learn more about the history behind the highway design. I obtained help from two people: Eric Bonow, a retired Great Lakes sailor with a summer cabin near Sand Bay who enjoys researching such topics; and Lee Telfer, a retired surveyor and resident of northern Liberty Grove. Lee’s home, in fact, lies across the road from The Clearing property, just north of Ellison Bay.

What I learned from conversations and documents was that Jensen was instrumental in the highway looking as it does today. But although his voice was influential and well respected, Jensen wasn’t alone in his pursuit of a winding road. His close friend Sid Telfer Sr. played an equally important role.

Lee Telfer, 78, grandson of Sid Telfer Sr., believes that it was the combined efforts of Jensen and his grandfather – in proposing a curving road at a time when the property committee was tasked in 1934 to create a road to Northport that became County Road B – that made it possible.

Sid Telfer Sr. had been elected a supervisor to the Door County Board in the mid-1930s. He was subsequently appointed chair of the county property committee, which at that time was given responsibility for county roads. Telfer invited his friend Jensen to join his committee, with the purpose of advising how a road to Northport might be laid out. Jensen, Telfer and others on the committee then approved a road purposely designed with many tight curves and with minimal cutting of trees, particularly sparing the larger trees.

“There was no public road then, in 1934,” Lee Telfer said. The state highway went to Ellison Bay and then on to Gills Rock, where it ended.

Poles had existed in a straight line through an opening cut through the woods leading to the Northport shoreline, and they became obstacles to avoid when laying out the road. Eric Bonow’s research on the poles revealed they were part of an authorization by the federal government to install a phone line to Plum and Washington Islands, and then onward to Rock and Pilot Islands, in 1903-04.

According to the Door County Advocate and Coast Guard log records, the poles carried phone wires connecting the Plum Island station to the Door peninsula as a means of reporting shipping incidents. A phone box was created at one point, whereby a Coast Guardsman returning from liberty could climb a pole near the water’s edge to access the phone, informing the station that he was ready to be picked up by the station’s crew. A tiny piece of land near the final pole appeared on plat maps in those years as being owned by Western Union.

The impetus for creating a public road between Gills Rock and Northport, according to the Door County Advocate, was the proposed construction of a 100-foot crib pier reaching into eight to 10 feet of water: a future landing point for Jepson’s Washington Island ferries and an option when weather made landing at the Gills Rock dock unsafe.

The pier project would be undertaken by LeRoy Voight at Land’s End. A public road made passable for autos and trucks would then be needed to connect those two points for the safe transfer of mail, autos and passengers. (It was much later, in 1956-57, that County B was added to the Wisconsin State Trunk Highway System as Highway 42.)

One can conclude – especially after reading passages from Jensen’s written philosophy – that the Northport highway, with its distinctive curves, fits nicely within his ideas of land use and human efforts to preserve and co-exist with nature.

The Supervisors together with the clerk met at the call of the Chairman (Telfer) to plan further the construction of the road East of Gills Rock to the tip of the Peninsula.

The site of the road was visited and it was agreed that the road be laid out winding so as to avoid the larger trees as long as it be kept within the 4 rod limits of the road (66 feet) and it was also agreed that it should follow the telephone line to the waters of Death’s Door, where a public dock is being constructed.

It was further decided that Geo. Schultz be the foreman for the project, which is to be constructed with P.W.A. funds, the Town agreeing to furnish the gravel for same, and also furnish supervision.

Jensen and Telfer’s recommendations were heeded by the rest of the property committee and by the county board. A highway crew made up of Works Progress Administration workers constructed the graveled roadway. By and large, Telfer and Jensen’s plan – submitted in 1934 – has not been significantly changed since.

These key references in local newspapers support the road-history timeline.

Congressman E.S. Minor proposed a cable to be laid across Death’s Door to Plum and Washington Islands, under the direction of the secretary of the treasury for use by the lifesaving service. The weather bureau would also be permitted to use the line. It’s presumed that the phone poles were installed to Northport at about this same time. A Coast Guard log entry in 1904 mentioned that the telephone line was tested to Pilot and Rock Islands and that it worked well.

A summary of county board sessions in 1935 stated that the property committee had resolved that the new section of road between Gills Rock and Northport, connecting with state trunk Highway 42 of Gills Rock be designated as County Trunk B. Committee members were S.S. Telfer, H.J. Teske, Harry M. Schuyler and Frank Nelson.

A new, 100-foot-long dock to be constructed for the Island ferry was to be built out to eight to 10 feet of water under the supervision of LeRoy Voight. The road improvement would be built with state and federal funds and was considered as important as the dock construction. It would also be used by tourists to go to Land’s End for the view.

The Land’s End road work in Liberty Grove was approved under the Works Progress Administration. Ten men plus a foreman would be assigned.

A portion of a letter to the editor of the Door County Advocate read as follows:

We are on the way! I take great delight in exploring the byways of our county north of Sturgeon Bay. In most places they are still unspoiled, but here and there the efficiency mind with its ruthless work has cleaned up things depriving wildlife of winter shelter, especially the birds, our friends, of their nesting places, and incidentally depriving us of the distinct beauty of these rural roads. But there is a ray of hope. I can always see the silver lining on the threatening clouds, and here it is:

The road to Northport is being put into shape for carrying the mail to Washington Island. Someone with a soul and a love for growing things must have directed this work. Nature has been left alone with its infinite beauty. Quietly the road winds through the woodlands. There are no deep ditches in which you may break your neck when the roads are ice. And why should there be deep ditches along the highways of Door County? The little surplus water there is the trees which grow along the highway need. I want to congratulate those who are responsible for this lovely piece of road work. If all roads in Door County were planned along the same lines it would be a great inducement to tourists to come and enjoy the beauty of our roads.