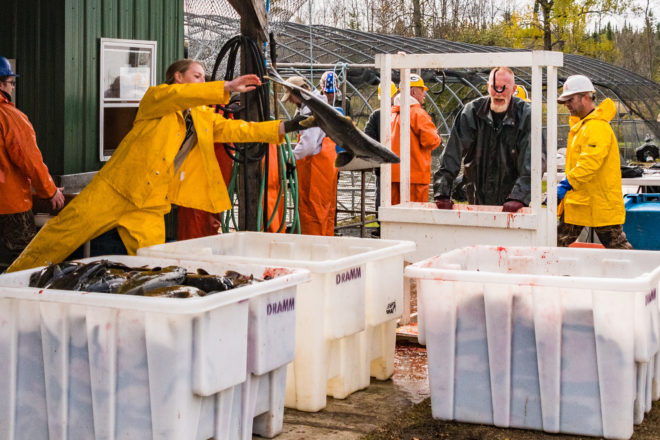 Each year, companies that can use the dead salmon bid for that right. In these photos, Manitowoc-based Dramm won the right this year. Photo by Len Villano.

Can a species be called invasive if it was intentionally introduced into our waters?

For example, fish farms in the Southern states introduced Asian carp to the United States in the 1960s and ’70s. The bottom-feeding fish helped keep the fish ponds clean. Through floods and accidental release, they found their way into the Mississippi River system, which the USDA describes as a “giant freshwater highway that has given invasive Asian carp access to many of the country’s rivers and streams.”

Now various government agencies are spending tremendous amounts of money, time and energy trying to keep Asian carp out of the Great Lakes.

What about a species that was introduced into the Great Lakes in the mid-1960s to kick-start a new sportfishing industry?

I’m talking about that anadromous (don’t worry — it simply means they can live in fresh and salt water) fish known as Chinook, or king, salmon. By 1970, they were planted in all five Great Lakes. They were first stocked in Sturgeon Bay’s Strawberry Creek exactly 50 years ago.

Salmon-stocking the Great Lakes was the brainchild of Howard Tanner, who was chief of the Michigan Department of Conservation’s Fish Division in 1964. A counterpart in the Pacific Northwest, where the Chinook and coho are native, had an excess of coho eggs that Tanner offered to take off his hands. Chinook eggs soon followed. The rest is history regarding what today is referred to as the $7 billion Great Lakes sportfishing industry.

Many sources claim the salmon were introduced to control the invasive alewives, but Tanner, who’s now 95 years old, has repeatedly said that alewife control was just a side benefit to his big idea of exploding the sportfishing industry with the excitement of big salmon.

Strawberry Creek in Sturgeon Bay has played a significant role in that industry’s sustainability.

Salmon are genetically predisposed to spawn upstream in the fall. That’s when the anadromousness of Pacific salmon kicks in, as they sometimes swim hundreds of miles upstream to find, spawn and die in their native, freshwater stream.

On Lake Michigan, Strawberry Creek is one of those spawning streams, but it’s only a half-mile from start to finish.

The Chinook’s acute homing instinct is achieved through what one researcher described as a “suite of environmental cues” and the salmon’s sense of smell — they smell their way to where they were born in order to produce the next generation.

You like to think they return to their native stream because its imprint on their early lives was a pleasant one. At the end of their lives, their carcasses will end up as animal feed or fertilizer or, to a lesser degree, at area food pantries and raptor rehabilitation centers. The first two options depend on who the low bidder was for the DNR’s contract for using the dead salmon.

“It’s nice to see that the fish are getting used,” said DNR fisheries biologist Nick Legler, who has worked at the Strawberry Creek site since 2012. “We have a lot — literally thousands — of fish that we need to handle and use. Pretty much all the fish are getting used in one way or another. First and foremost, our goal is to collect eggs for our hatchery productions.”

In 2018, fall processing at Strawberry Creek took place on six nonconsecutive days during the first three weeks of October, with a total of 3,866 Chinook processed and more than 1.9 million eggs collected from 348 female Chinook. The eggs were delivered to the Wild Rose State Fish Hatchery, where they were incubated, hatched and raised to fingerlings before being restocked into Lake Michigan or its tributaries. In May 2019, 112,000 of those Chinook salmon fingerlings were stocked in the enclosed Strawberry Creek pond.

“We held and reared them for three and a half weeks and released them on May 29,” Legler said. “The idea there is trying to get those fish to imprint on that water, and then as adults when they mature, those same fish will come back to the Strawberry Creek weir to spawn. The majority of fish coming back to Strawberry Creek are going to be the young fish who were stocked there.”

The sleepy, backwater location — just off an easily missed gravel road — comes alive with activity during the fall egg-collection period.

“It’s a pretty big operation at Strawberry Creek in the fall. On most days, we have 15 to 20 people working,” Legler said.

He is joined by other DNR personnel from the Wild Rose State Fish Hatchery, the C.D. “Buzz” Besadny Anadromous Fish Facility in Kewaunee and the Sturgeon Bay office, as well as DNR fish-health staff members who do a routine, annual fish-health assessment.

“We’ll have people from the U.S. Fish and Wildlife Service who help us out as well to collect snouts and coded wire tags,” Legler said. [For the past two decades, the DNR has been injecting coded wire tags into the snouts of salmon and trout fingerlings as a way to study movement patterns.]

Regarding the aforementioned annual fish-health assessment, Legler said it has been generally good for Chinook during the last few years.

“One thing we have noticed, for the past three years, we’ve seen relatively big Chinook salmon,” he said. “The average weight of age-three female Chinook is 22.4 pounds, which is big. Actually that is the biggest we’ve had on record. We’re seeing relatively big fish in the fishery and in the weirs, which is encouraging and good to see. That’s following several years where we had very low weights. In 2007, the average weight was 10.7 pounds, which was the lowest on record.”

He attributes at least some of that to Chinook stocking levels.

“We’ve done several adjustments,” Legler said. “One of the goals with those stocking levels is to try to balance the number of predators with the available prey. So the forage biomass in Lake Michigan right now is relatively low. For that reason, we have seen several years of very low weights of Chinook salmon, but we’ve adjusted stocking. The predator-to-prey ratio has improved, despite the fact that the biomass remains low, and one of the positive outcomes of that is we’re now seeing bigger fish coming out of the lake.”

Legler mentioned there is always a healthy contingent of volunteers who show up at Strawberry Creek to help process the salmon, including students from the University of Wisconsin-Green Bay and UW-Stevens Point.

In addition to the workers processing the fish, the public is invited to watch and learn what the Strawberry Creek facility is all about.

“During the fall run, which is typically the first three weeks of October, it’s very common for people to be out there watching the fish when we’re out there, which is typically Monday and Thursday the first three weeks of October,” Legler said. “People can come inside the fence and observe the procedure. We also do probably a half-dozen or so group tours that we run every year as well.”

During the six processing days, Legler is usually involved in some aspect of the process, but if there is a tour or even an informal gathering of interested people, he stops what he’s doing to educate the group about what the facility does.

“That’s a big part of the job, and it’s fun,” he said. “We go out there to Strawberry Creek twice a day, seven days a week, just to check on things. More often than not, there are people there. I’ll do short, informal tours. It’s pretty neat.”

His biggest regret is that he didn’t begin logging all the license plates from other states when he started the job seven years ago.

“A lot of people from out of state come to see it,” he said. “It’s kind of funny. It’s just a little gravel road that’s out there, but people know about it and show up.”