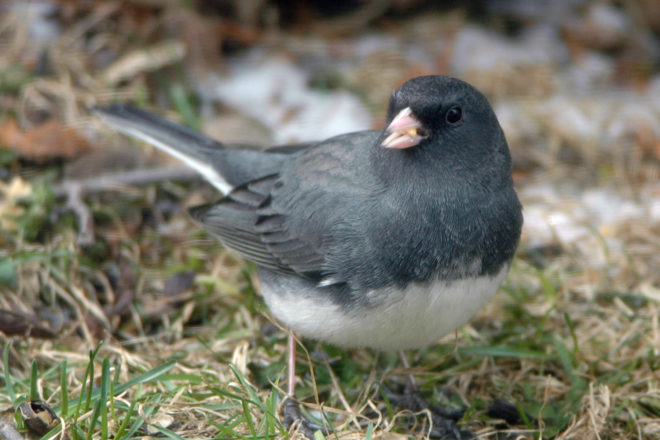 A dark-eyed junco has a bit of cracked corn in its beak. Photo by Roy Lukes.

Each year, groups of birders organize to conduct 24-hour-long Christmas bird counts. The standard nationwide dates run Dec. 14 – Jan. 5, and they must be run within a designated 15-mile-diameter circle.

Adrian Freitag had been doing the Sturgeon Bay count for many years but could no longer get out to conduct the one-day survey. After learning about this, my late husband, Roy, and I renewed that count in 1996 and started a new one in southern Door County the same year.

Every year we contact people who have helped in the past to see whether the same field-party groups can cover their assigned territories. It’s important to reach all parts of the circle yet not overlap with the zones of other field parties. If, for example, a snowy owl is seen near the border of a zone, the group’s compiler notes exactly when and where the bird was seen so that we can compare sightings with the adjacent field party to decide whether both groups have recorded the same bird.

Two of the best field counters are brothers Kevin and Darrin, who grew up in Sturgeon Bay but now live in neighboring states. We’re grateful that they make the journey back to do both counts in one weekend.

It’s so important to begin the count day as early as possible, which Kevin and Darrin do. They also play the calls of certain owl species and listen for the responses – that’s the way to include a species by voice without actually seeing it. These two brothers have great hearing and the ability to recognize the call of each owl species – a very valuable skill.

We also enlist the help of people who feed birds and record the highest number of each species that they can see from their homes. By doing these counts in a consistent manner, the federal wildlife officials obtain important information about how winter bird populations are changing from year to year.

Each count day requires noting weather conditions such as wind speed and direction, cloudiness, high and low temperatures, and the amount of snow cover. We always hope for clear skies and very light wind because when there are strong winds, many birds seek cover, making it harder to find them.

One year we had to cancel the Brussels count because of extremely icy roads. Another year, we did run the counts, but snow that began to fall made the visibility very poor.

Recent reports from Canada that the nation’s trees produced a great number of cones and seeds mean that many of the smaller finches may not migrate into our area. If they do move down here, it may not happen until mid-winter, when the northern food supplies have been exhausted.

I remember some years when the common redpolls did not arrive in Door County until February but appeared in great numbers. Other species that may show up here in winter include pine siskins, Bohemian waxwings and pine grosbeaks.

We try to conduct the counts as early in the specified period as possible, hopefully before the shorelines become ice covered. Waterfowl are difficult to identify when they’re so far out into the lake that seeing them requires a spotting scope.

Here are some interesting examples of low and high numbers of species that are seen on nearly every count. The Sturgeon Bay count records show only 227 Canada geese in 2008, but three years later, we counted 6,168. Mallards in 2017 numbered 92, but in 2005, we counted 1,388. The numbers also record the bald eagle’s comeback during the last 22 years: None were seen in 1996, but 15 were counted during each of the last three years.

Seeing unusual bird species makes a count day very memorable, and each year we celebrate the avian wonders of how birds can survive our harsh winters. As you enjoy heated spaces this winter, remember the wild birds outside, and give them food and fresh water each day.