During my almost 57 years on this planet, I have always had a rather perverse interest in little-known facts; indeed, when I was young, my parents, on the frequent occasions wherein reiterated some piece of minutiae, would simply point out to the perplexed listener that I was drawing on the endless assortment of useless information that filled my head.

I’m an adult now and I readily admit that my brain is crowded with largely irrelevant drivel. As they say in the parlance of treatment centers, “I can own that.” While I am unable to remember many of the things I actually did in my life (particularly from the late 1970s through most of the 1980s), I can remember things like the fact that the Pentagon has twice as many toilets as necessary because the original builders made a provision for segregated toilet facilities.

I point out this peculiarity in my character to underscore the fact that, as I continue to age and assimilate more useless information, it becomes increasingly difficult to surprise me with irrelevant facts. Likewise, the room for information that actually has relevance and meaning becomes increasingly limited in the finite amount of room within my skull.

One way I have found to deal with the decreasing space in my brain is to “spill” some of the drivel taking up space in my brain onto newsprint in this column. In some small way this seems to ease the space shortage in my brain. The “facts” I share with you today are in italic; my comments, if any, follow in plain type.

• A crocodile cannot stick out its tongue. Why would a crocodile have to stick its tongue out?

• The strongest muscle in the body is the tongue. Except in crocodiles.

• Babies are born without kneecaps. The kneecaps don’t form until the child reaches 2 to 6 years of age. This explains why infants and toddlers can crawl around for hours without seeming to experience any pain. These days my own knees only bend with great reluctance.

• Right-handed people live, on average, nine years longer than left-handed people do. You probably already know that, according to the latest data, women live approximately seven years longer than men. I point this out because if you are right-handed woman (which the majority of you are) and you marry a left-handed man, you are facing the statistical prospect of spending 16 years as a widow. If you marry a left-handed man, who is a smoker and builds skyscrapers for a living your marriage could appropriately be called “an exercise in futility.” 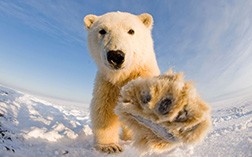 • All Polar bears are left-handed. Very useful to know the next time you get in a boxing match with a Polar bear. But does this mean that a Polar bear’s life expectancy is nine years less than other bears?

• “Stewardesses” is the longest word typed with only the left hand. See the next point.

• “Typewriter” is the longest word that can be made using the letters only on one row of the keyboard. Both this fact and the one above were quite obviously the discoveries of a writer who spent way too long staring at the blank sheet of paper in his typewriter without forming a single sentence.

• American Airlines saved $40,000 in 1987 by eliminating one olive from each salad served in first-class. Think how much they would save if they got rid of that inedible wedge of tomato they insist on inflicting upon us in coach.

• Elephants are the only animals that can’t jump. The person who asserted this fact quite obviously failed to take into account several of the large white men who played center for the Chicago Bulls during the late 1960s and early 1970s.

• Humans and dolphins are the only species that have sex for pleasure. Too bad for all those other species.

• Some lions mate more than 50 times a day. If the above assertion is true, then these lions that mate 50 times each day are doing so for purely reproductive purposes? There must be some sort of fertility issue going on here.

• The male praying mantis cannot copulate while its head is attached to its body. The female initiates sex by ripping the male’s head off. Thus, if you are a male, and a female, in a fit of rage, declares that she is “going to rip your head off,” it would be quite witty to inquire, “Will this be safe sex?”

• On average, people fear spiders more than they do death. See next.

• You are more likely to be killed by a Champagne cork than by a poisonous spider. See next.

• The average human eats eight spiders in their lifetime at night. Don’t’ you feel a whole lot better about arachnids now? And finally:

• A dentist invented the electric chair. With all due respect to my friends who are (or were) dentists, the next time you’re sitting in a dentist’s chair and they tell you that your fears are irrational, be sure to remind them of this fact. That should give them pause.

That concludes this week’s exercise in brain clearing. Next week I’ll try to provide something in this space that has more significance – now that there’s a little more room in my brain.