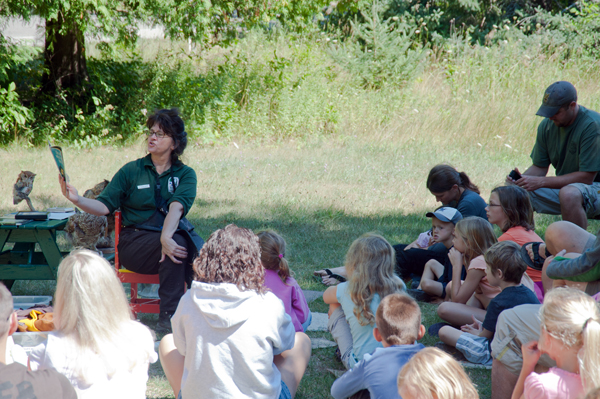 Parents and educators said naturalist programs like this one by Peninsula State Park Naturalist Kathleen Harris, have been cut back or eliminated in recent years. Photo by Katie Sikora.

Users, volunteers, partners, and former Department of Natural Resources (DNR) staff said the effects from years of funding cuts, staff shortages, and maintenance neglect have accelerated with the elimination of state tax dollars from the parks budget.

Former Peninsula Superintendent Tom Blackwood is a critic of the current direction of the DNR and park system under Governor Scott Walker, but he said the problem has been growing for a long time.

“Budgetary freezes of state agencies far precede Scott Walker,” Blackwood said. “Things did not fare too well under Doyle either.”

Door County’s five state parks have seen key positions sit vacant for months and years at a time and educational programming reduced. The years-delayed master plan that guides future projects hasn’t been updated in more than a year.

At Peninsula State Park the popular Spooktacular Halloween Hike for families is no more, as are many other educational programs. A park maintenance position has gone unfilled for more than a year, and the Assistant Superintendent position has been vacant since November of 2015. Whitefish Dunes did not replace park naturalist Carolyn Rock when she left after 16 years in 2015.

Park volunteers say they’re increasingly being relied upon to perform invasive species containment and trail maintenance that was once performed by park staff, and parks are increasingly reliant on them for programs, and funding for short-term summer staff positions.

Ben Bergey, Director of Wisconsin State Parks, said program and staff changes aren’t a reflection of the change to a self-sustaining parks system, but are part of ongoing evolution in priorities within the park system.

“Changes have always gone on,” said Bergey, a 17-year veteran of the parks system who served one year as assistant superintendent under Blackwood at Peninsula. “There isn’t one case where we’ve ever asked a Friends group to fund a base thing. Nor will we ever ask our Friends group to sustain our programs for us.”

Erin Brown, supervisor at Potawatomi State Park who has served two stints as interim Superintendent at Peninsula State Park, said staffing levels have not diminished at Potawatomi or Peninsula over the past 10 years. The Wisconsin DNR provided a record of total labor expenditures over that period, but no records of the number of positions filled.

Users such as Vinni Chomeau, Project Coordinator of Friends of Gibraltar, which provides and coordinates programming for Gibraltar Schools, said the changes are noticeable.

“In the past we were able to schedule a trip to the parks and go, and the naturalist would lead the program,” she said. “Last year, for the first time, I had to teach them, or a classroom teacher.”

Chomeau said a naturalist can offer much more to the students than a teacher.

“The naturalist has experience teaching in the outdoors and knows how to make that work,” she explained. “They have better plant identification skills, wildlife identification skills. They know the distance it takes to hike to a certain spot. They’re able to tie in so many other stories of things that have happened in the park, and are able to connect to a student’s interest in that career.”

Gary Marciniak expressed more serious concerns about park cutbacks. A Hartford, Wis. resident, Marciniak has hunted in Peninsula State Park since the state first legalized it in 1992, and volunteers to lead programs on beading, crafts, and storytelling at the park each year. He worries that dwindling resources are putting lives at risk.

“In hunting season, we used to see banners across hiking trails that said, ‘Danger – Trails Closed,’ letting people know there were hunters in the park,” he said. “We don’t see that as much now, don’t see roads getting barricaded. So you have bikers and hikers going through the park with brown coats and fur hats in the hunting area.”

Trail users have observed this as well, and Marciniak said he has heard similar stories from hunters in other state parks, and says it’s a tragedy waiting to happen.

“Eventually, someone is going to get shot,” he said.

Kathleen Harris has been a naturalist at Peninsula State Park since 1998. She said she’s disappointed she isn’t able to offer certain programs anymore, but cautioned that there are many reasons for optimism about the parks.

“We have some young rangers that I think are really dynamic, and if that’s the future of the state parks, we’re in really good shape,” she said. “In a few years, maybe things will turn around and we’ll be able to offer the level of programming we have in the past. There are lots of positive things going on, it’s not all falling apart here.”

Former DNR Secretary Scott Hassett, who served under Doyle, said he is puzzled by the cuts to the state parks.

“The lack of support for the state parks is disturbing and short-sighted,” Hassett said. “These are economic drivers for communities, and I think asking them to be entirely self-sustaining is wrong. Fees are not enough. You end up with deferred maintenance, you lose popular programs, you lose naturalists who work with kids. They are not taking into account the economic impact on the community. These people spend at the supper club, the gas station, and services. That alone justifies support from the state out of tax revenue.”

“I don’t understand it,” Hassett said. “You can approve huge subsidies for a stadium for the billionaire owner of the Milwaukee Bucks, but you begrudge the parks a tiny fraction of that.”

Bergey, a father of four and self-described silent sports nut from Ashland, Wis., said he and his agency are working to improve the park experience in Door County and throughout the state.

The struggle to fill positions is nothing new. For years the parks have struggled to fill vacant positions due to budget freezes, funding cuts, low pay, and burdensome hiring requirements. But this is one area where recent changes are making an immediate positive impact. The DNR recently lifted the requirement that park managers and staff be certified law enforcement officers, which made it extremely difficult to find qualified applicants.

“Our staff can be focused on public relations services, not law enforcement as well,” Bergey said. “Law enforcement is a very high-stress job, and putting that stress on our staff who didn’t have to do that all the time wasn’t fair.”

Bergey said the change widened the pool of applicants greatly, and resulted in the highest number of applicants to a top management position in his 17 years in the parks system when the Peninsula State Park superintendent position opened in December. New Peninsula Superintendent Brian Markowski was hired in March, a much quicker turnaround than the years it took to replace Tom Blackwood when he retired in 2009.

Bergey hopes that this change, plus recent modest wage increases for park rangers and short-term staff, will help in what has been an uphill battle to find park staff in recent summers. With a base of $9.50 per hour and high-end pay of $12 per hour for part-time summer staff in visitor services and labor, parks have struggled to compete for employees in a market where service industry businesses are increasingly desperate for quality summer help. This summer the top pay level has increased to $14 per hour.

Brown said her biggest challenge has been getting people to apply for positions.

“There’s just so much competition out there for summer jobs,” she said. “The last several years there were no wage increases, but we have a little more flexibility this year.” 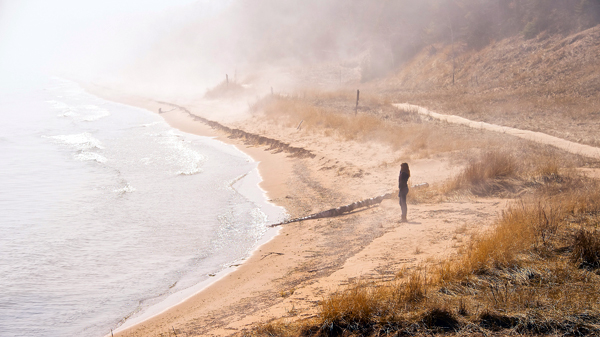 Images like that of the famous beach at Whitefish Dunes State Park are used to draw visitors to the peninsula who spend millions of dollars every year. Photo by Len Villano.

But those wage increases will come from an operational budget already squeezed by cuts, putting more pressure on the system to increase user fees further and pursue other revenue sources, such as sponsorships or naming rights. Users fear this will result in a much different parks system than the one they love, with higher fees, reduced services and programs, and a diminished focus on conservation.

“My concern is that they will impede access to many people who can no longer afford to camp,” Blackwood said. “Apparently the Governor believes that the parks should be financed entirely on the backs of families who use our parks. This fails to acknowledge the intrinsic value that these gems bring to our state, whether or not they are used by all.”

In spite of recent changes and the fears of users, Brown said the parks are resilient. She expects the parks will continue to thrive, and that five to ten years down the road they will look very similar to what they do now. Bergey is even more enthusiastic.

“I’ve never been more excited about the future of the state parks,” he said. “The benefit I see in our self-sustaining models is being reliant on our own ability to use our revenues does give us the option to know where we’re at and gives us security. We can do things we never could do before.”