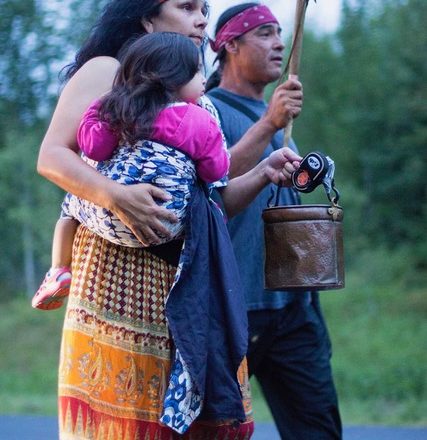 The UU Gallery, 10341 Hwy 42 in north Ephraim, is presenting Photographs of the Sacred Water Walk of the Ojibwe through March 29.

Jeff Pearcy and Meredith Watts photographed the last two days of a water walk organized by the Ojibwe elder Josephine Mandamin. It was the sixth of seven such walks by Indian women and men to honor water as a sacred element at a time when it’s threatened. This walk began in Matane, Quebec, and ended on Wisconsin’s Madeline Island near the Red Cliff Reservation – the route that elders believe the Anishinaabe people took from east to west in prehistoric times. Native women of all tribes in the region were invited to participate.

Pearcy has more than 30 years of experience as a photojournalist and is the organizing photographer of For Good Photography in Milwaukee. His work on Cuba appeared in the UU Gallery in 2017. Watts is a retired UW-Milwaukee social scientist who now works as a photographer. Recently, his work was on display in the Museum of Wisconsin Art and the Walker’s Point Center for the Arts.

The exhibit is part of a yearlong focus on Native American cultures by the Racial Justice Action Team of the Unitarian Universalist Fellowship of Door County. Learn more by calling 920.854.7559.