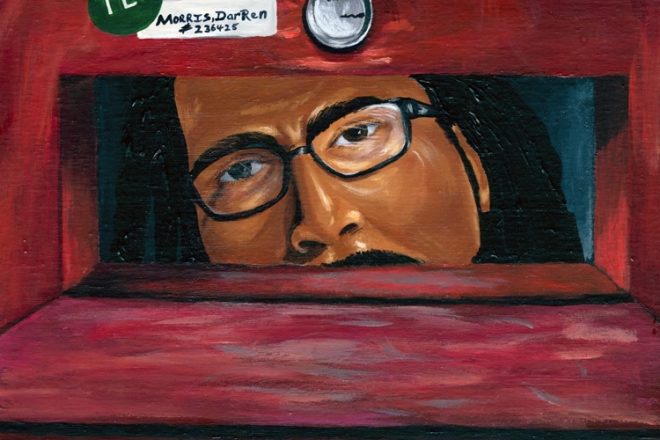 “On the Inside Looking Out” by DarRen Morris, whose artwork is in a solo show at the Unitarian Universalist Fellowship in Ephraim through the end of March.

Childhood trauma, mental illness, racial divides and prison reform are given a visual and textual spotlight in the powerful and disturbing, yet hopeful artworks now on display in the Unitarian Universalist Fellowship’s current exhibit, DarRen Morris: Art and Redemption.

Presented in collaboration between the UU Racial Justice Action Team and Write On, Door County, the display is a solo show for DarRen Morris, a self-taught artist serving a life sentence at the Green Bay Correctional Institution. He is also co-author, with Madison writer and professor Judith Adrian, of In Warm Blood, a biography that resulted from five years of letter correspondences between the two. 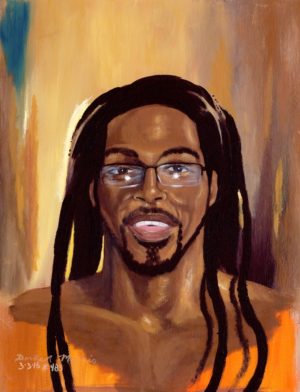 “Self Portrait” by DarRen Morris.

The two met at a prison ministry group in 2010. Adrian recalls Morris as a “whip smart,” creative and humorous man who stood out among the group. They soon began corresponding by mail weekly, and after several years, both had amassed a treasure trove of letters detailing their most intimate secrets and stories, which in publication, highlight their separations of class, race, education, opportunity and gender.

Perhaps most notable of these secrets was Adrian’s family history.

“On my 16th birthday, my dad sat me down and told me that he had been incarcerated,” Adrian said.

That admission influenced the trajectory of Adrian’s personal life and career. She learned not only of the circumstances that led to his incarceration, but the privilege of being wealthy, white and male that allowed him to serve just three months of a 15-year sentence and go on to join the military, use the G.I. Bill to finish medical school, and become a physician. Eventually he became a medical researcher whose work involved research and experimentation on prisoners. The parallel experiences of Adrian’s father and Morris provided the foundation for Adrian and Morris’ relationship, and continue to inspire her tireless efforts to fight for prison reform in Wisconsin.

In Warm Blood is a notable accompaniment to Morris’ paintings, providing an intense and in-depth exploration of the cycle of poverty and violence that led him down this path.

The paintings serve a visual diary of Morris’ life, from childhood to present day. In the exhibit, they are deliberately grouped to clearly indicate the particular circumstances that led him from one point in his life to another. 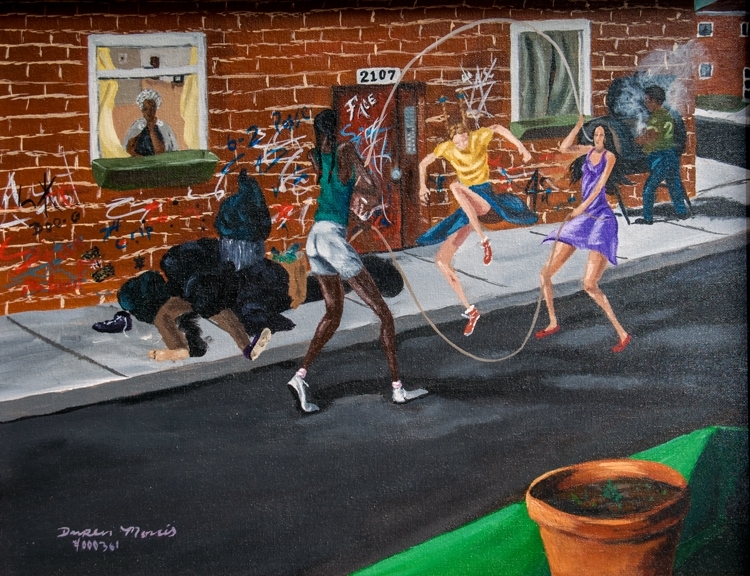 “Jumpin Rope” by DarRen Morris, the artist’s depiction of his childhood neighborhood.

Tension between hope and risk runs rampant through the exhibit. Viewers are forced to confront an abject childhood through visual re-creations of Morris’ personal experiences:  physical and sexual abuse perpetrated by violent half-siblings, a neighborhood touched by gang violence, an upbringing with a pimp father, and Morris’ declaration as the family pariah after he, then three years old, accidentally shot his mother while playing with his father’s loaded pistol. On the opposite wall hang paintings of incarceration and in between, nods to the community of his youth and his growing spirituality as a Rastafarian.

Bright acrylics give liveliness and motion to his figurative works, and muted tones are reserved for exploring stagnation, terror and disdain. The exhibit includes a range of forms – still lifes, portraits and visions – painted in his cell on canvas and, sometimes, cardboard. Paintings are accompanied by artist statements from Morris, detailing the circumstances and thought patterns that accompanied their creation.

Adrian regularly travels with Morris’ paintings, which she describes as “a social justice movement.” She has presented them in exhibits at more than 30 different churches, often pairing them with book discussions of In Warm Blood. The book has proven a useful tool in Adrian’s undergraduate and graduate classes at Edgewood College, where she teaches restorative justice and other sociology courses.

Adrian reiterated her belief in the power of personal connection – through artwork, written text and spoken word – to share prisoners’ stories and highlight the need for prison reform in the state of Wisconsin (which, University of Wisconsin-Milwaukee research shows, has the highest incarceration rate for African Americans and Native Americans in the country). 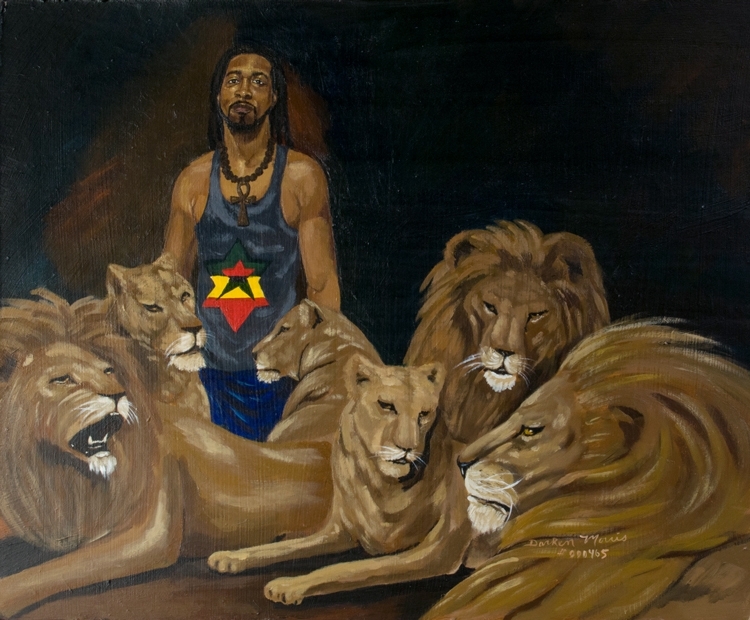 In a letter interview with the Peninsula Pulse, Morris agreed, adding his hope to highlight the unseen and unspoken in society who often face the greatest risk of incarceration.

“I hope that my experiences will have some contribution to the transforming of thought and perceptions of the disenfranchised people on this side of the wall,” Morris wrote. “And the ones out there that are invisible to the conscious of our current society.”

In conjunction with the exhibit, Adrian will be in residency at Write On, Door County the week of March 11, and will lead two local book discussions on In Warm Blood this month:  at 7 pm on March 12 at the Miller Art Museum, and at 1 pm on March 25 at the UUF.

Copies of In Warm Blood are available to purchase in the gallery. Donations are also being accepted to help Adrian purchase art supplies for DarRen and visitors are also encouraged to correspond with him through supplied notecards and envelopes.

DarRen Morris: Art and Redemption is on display at the UUF through March 25. A closing reception will be held March 25 from 11am until noon. The UU Gallery is located at 10341 Water St/Hwy 42 in Ephraim. It is free and open to the public. For more information call 920.854.7559. DarRen’s work may be viewed online at darrenmorrisart.com.

How important has art been in your life?

I don’t ever remember a time where I wasn’t drawing or thinking about drawing. I had stopped for a while when I was young. I had been told that males who were artists were “sissies.” I didn’t know what a sissy was but the “twang” wrapped around the words told me all I need to know. But even then I’d go to the museum and look at art. Almost daily. But I’ll say this:  since I’ve been in prison, it’s saved my mind and my soul and very literally my life. Prison takes away individuality and dulls the fire in what makes us special. Art connected me to the magic of being and being seen as a human. Artist is a word that signifies life. Prisoner, convict, inmate, offender are words that describe death.

You were hesitant to publish a book that revealed your childhood abuses. How did you work through that hesitation?

Being in prison, it’s an environment where homophobia [exists] and, yes, in here many have declared that a boy being abused is homosexuality and that’s my point; they are so afraid to look at it, to face their own stuff that they have to demonize it and shun it. But it can’t be shunned. I had to tell somebody. It had become parasitic, draining me of my life force. And as I began to write, it opened a wound, so deep I was unsure if I’d make it. Thankfully I did. But I decided before the book came out that I was gonna have control of the story I had published in here. What that means is I get out ahead of it. I began telling people about the book and what happened and then with the exception of a smaller group of maybe 10 people, everyone else was able to empathize with me and some even blew me away by entrusting me with their unrevealed abuses in most cases…Publishing this book allowed me to connect with these men, which led me to believe that if people out there understood that many of us are the way we are and who we are because of the pain we’ve had to hold in secret.

What do you hope viewers of your art come away with?

I pray they come away thinking about all the children out there that are in danger and are at risk. It would be a blessing from God if they see our humanity and not our crimes and seek to help us who want to heal and therefore can heal to do so and let us come home…Part of what makes prison such a hard place is to be away from our people. We need to treat the issues that led to criminal behavior. If we don’t work together to solve it, your tax dollars will be used to bandage and stitch up and you’re gonna need some more cells.