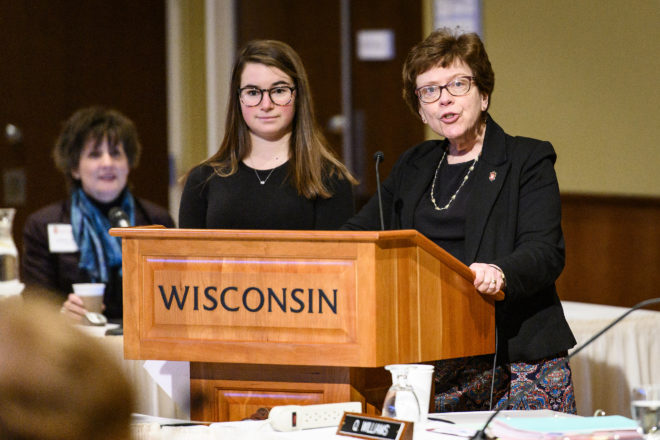 University of Wisconsin-Madison freshman Mackenzie Straub told the UW System Board of Regents on Friday, Feb. 8, that the new Bucky’s Tuition Promise program has made a big difference for her.

“I am able to come to this great university without the economic hardship that tuition can put on any individual,” said Straub, who grew up in Sister Bay and was valedictorian of her high school class.

Bucky’s Tuition Promise tells students that, if they are admitted to UW-Madison and if their family income is in the bottom half of the Wisconsin income distribution (below $58,000), UW-Madison will create a funding package that guarantees coverage of tuition and fees for four years.

Mackenzie is one of nearly 800 students from 65 Wisconsin counties in the freshman class who is receiving it.

Straub’s father died of cancer in the fall of 2014, shortly after her sister began college and she began high school.

“Bucky’s Tuition Promise has relieved much financial stress on my mom and I, and we know it was a sign from my dad watching out for us,” Straub said.

After volunteering at the Neighborhood House with elementary-school-aged children, Straub decided to be an elementary-school teacher. She’s applied to the Early Childhood Education Program with a certification in English as a Second Language.

“My experience at UW-Madison has been wonderful. I have learned so much, not just about the environment, algebra or the Spanish language, but about myself,” she said. “UW-Madison is a very unique and diverse university, one that I am happy I chose to attend.”

“She had expressed her gratitude for this support, but it’s clear that we are the ones who should be grateful that Mackenzie has joined our student community,” Blank said.