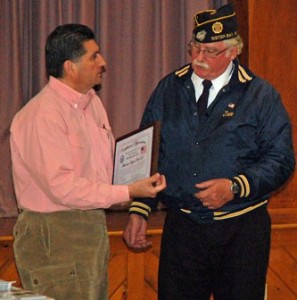 Forty years ago this coming April, the Vietnam War ended with the fall of Saigon to the Communists, and all the young veterans came home to a country still divided by the war.

Now those young veterans are part of “a large-scale movement to come into VA nursing homes,” said Secretary of Wisconsin Dept. of Veterans Affairs John Scocos at a listening session he held in Sister Bay on Oct. 30. Twenty veterans showed up for the event.

Scocos said more than 50 percent of requests for assistance from the state veterans affairs office are coming from Vietnam veterans, their spouses or their children.

“We are extremely busy right now,” confirmed Door County Veterans Affairs Officer Scott McFarlane. “A lot of it is the Vietnam veterans getting older, and starting to have ailments related to Agent Orange from their service in-country. Unfortunately.”

For nine years – from 1962 to 1971 – the U.S. military sprayed herbicides over Vietnam to strip the jungle canopy that could hide Vietnamese forces, and on crops those forces might consume. At first it was known as Operation Hades, but came to be known by the more innocuous Operation Ranch Hand.

Different herbicides were used, all identified by the color of bands on the storage drums. There was Agent Blue, Green, Pink, Purple, Orange and White. Agent Orange, an herbicide that contained the most toxic form of dioxin, was used about 60 percent of the time. More than 11.4 million gallons of it were used, along with about eight million gallons of the other herbicides. The concentrations used were 20 to 55 times stronger than normal agricultural use.

Vietnam veterans returned with health complaints, and, eventually, complaints about the health of children born to them after their return.

It wasn’t until 1991 that Congress passed the Agent Orange Act, which asked the National Academy of Sciences to perform a comprehensive evaluation of the health effects caused by Agent Orange and other herbicides. That study continues with a biennial report, the last of which was released in 2012.

While the Department of Veterans Affairs allows compensation to anyone who had “boots on the ground” in Vietnam or served on particular U.S. Navy ships from 1962 to 1975 (amounting to 2.8 million people), the compensation is for service in Vietnam and is not specifically linked to herbicide exposure. The World Health Organization labels dioxin a carcinogen (cancer causing) and the American Academy of Medicine labels it a teratogen (causes birth defects).

“We are seeing a huge uptick for the need for care of that generation,” Scocos said, adding that there are currently 408,000 veterans in the state right now. “We’ll probably go down to half of that by 2018,” he said.

Scocos said his department’s efforts are spent “making sure our veterans’ homes are the best.”

“We’ve really taken a business model approach to make sure vets and their spouses get the very best care,” he said.

Scocos also pointed out that when he returned to the job in 2011 (he was fired by the five-member Board of Veterans Affairs in 2009, but was appointed to the position by Gov. Scott Walker in 2011; in 2013 the state offered Scocos $325,000 to settle the lawsuit he filed for the 2009 firing) the department was $134 million in debt, and today it is in black to the tune of $9 million.

The newest push for state veterans is the establishment of a task force to bring more veterans into state jobs.

“A lot of our disabled veterans need to get in the door and show that they’re great employees,” Scocos said.