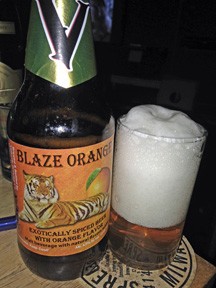 To find one with substance is always a thrill. Let me introduce you to Blaze Orange from the Valkyrie Brewing Co. of Dallas, Wis. It’s light, refreshing, yet it has body and substance, with a bit of orange and spices.

The last time I ran across this brewery they were called the Viking Brewery and I’d had a beer of theirs called Hot Chocolate, a chocolate stout with chili peppers. I liked their style, and I like it still with Blaze Orange.

But how does the Viking become the Valkyrie. For an answer, I emailed Randy Lee, founder, brewer and co-owner with wife Ann of the brewing company in northwestern Wisconsin. I asked about the name change.

“Well, there’s this brewery in Iceland that owns the Viking trademarked in most of Europe and they wanted to come to the U.S.,” Randy said. “We had it trademarked here. So we sold them the name, figuring we could be someone else. I kinda like the new name better actually. And besides we now have a theme song. Glad you liked the Blaze Orange. That’s another of Ann’s creations. Oddly refreshing beer.” 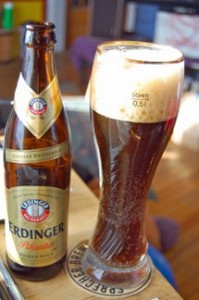 There may be nothing in the world more refreshing than a Weiss beer. It is the ultimate summer beer. But since it’s winter, time for weizen-bock, the dark, or dunkel, version of Weiss. I picked up a bottle of Erdinger Dunkler Weizen-Bock. Yum! Rich and dark, yet light on the palate. I had mine in a tall Weiss glass, and it looked like a work of art, with a big, rocky white head sitting atop the deep brown beer.

Samuel Adams always makes fine beer. I just had my first of what they call their “Barrel Room Collection” of brewers’ experiments in beer. This one is called Tetravis, a Belgian quadruple ale aged in oak barrels. It’s a 10.2 percent brew, and, as you might imagine, there is a lot going on in terms of layers of flavor. I have no idea what the name means.