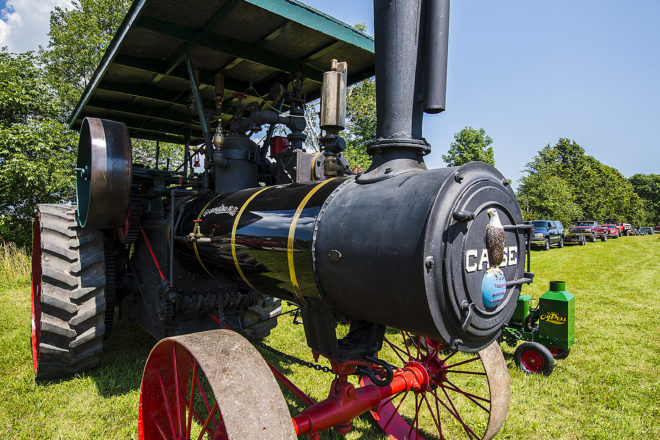 An old-time tractor at the Valmy Thresheree. Photo by Len Villano.

Subtly, over the last quarter of the 20th century, American farming as we had known it disappeared. Pastoral images of the family farmer in the heartland were supplanted by the logos and marketing slogans of corporate agriculture, high science, and maximized yields. As the changes accelerated in the early 1980s, a group of peninsula farmers sensed that a way of life was slipping away, and they set out to preserve the traditions and lessons of the small family farm.

Each August, the Valmy Thresheree and Antique Machinery Show takes visitors into the past for a look at old ways of the hardened rural farmer. Launched in 1983 by Bernie and Shirley Geisel, the show is now organized by the Northeastern Wisconsin Antique Power Association and has become a surprisingly popular draw. An estimated 4,000 to 5,000 people visit the grounds each year.

“We wanted to keep the old agricultural heritage alive,” says Shirley Geisel. “Bernie’s father and uncles would go from farm to farm and thrash, and we didn’t want the old ways forgotten.”

Kathy Massart grew up on her grandparents’ farm in Brussels and is a member of the association. She says it’s important to remember the techniques of the past and the hard work they required. “Nowadays we can bail 100 acres of hay in a day,” Massart says. “Back then, you were lucky if you could do 20 acres with a horse in three days. You lose a lot if you let this history disappear. People don’t realize how much work it was back then and how much detail went into things.”

The Geisels hosted the thresheree for its first 15 years, and still supply much of the old equipment. Visitors can see an old-style stationary hay press, stone crushers, a potato picker, and horse-drawn equipment. These reminders of farming’s labor-intensive past aren’t just put on display, explains association member Ralph Bochek. “We try to keep it an operating museum, keep things in working condition so people can see how it was used.”

In 1997, the association bought 40 acres just down the road from the Geisel farm, giving the thresheree a home of its own.

For the Massarts, like many who take part, it’s a family affair. Kathy’s daughter Marie, 22, helps with publicity, and has been to the show every year she can remember. “It never occurred to me not to be a part of it,” she says. “My parents have always been in the club. I just love being with all the people and family. It’s a nice way for people to get to know how farming was done years ago.”

Geisel says the connection the thresheree helps to forge among generations is among her favorite parts of the weekend. “You see people who bring their families, and when they see an old machine being demonstrated they’ll say to their kids, ‘This is what your great grandpa used to do.’” The show paints rural history with a more vivid brush, full of sounds and smells that create images that words never could. But Geisel says they’ve realized there are limits. “Times have changed. We have a lot of machinery now from the 1940s, 1950s, and even ‘60s. But the stuff from the early 1900s is so different that people have a hard time even relating to it.”

Though created to showcase farming traditions, the weekend features attractions for all ages that take revelers outside the constraints of the normal festival activities.

There’s a chainsaw competition, an antique tractor pull, and lots of polka music. Kids get their own tractor pull, a little farmer dress-up contest, and other contests. And, of course, there’s the mud pig wrestling competition, which might be more fun to watch than to compete in. “It’s nice to see, “ Geisel says with a chuckle, “if you don’t sit too close to the mud.”

The pig wrestling makes for great photos and has earned the thresheree a bit of notoriety, but the event’s purpose remains steeped in its rural roots. 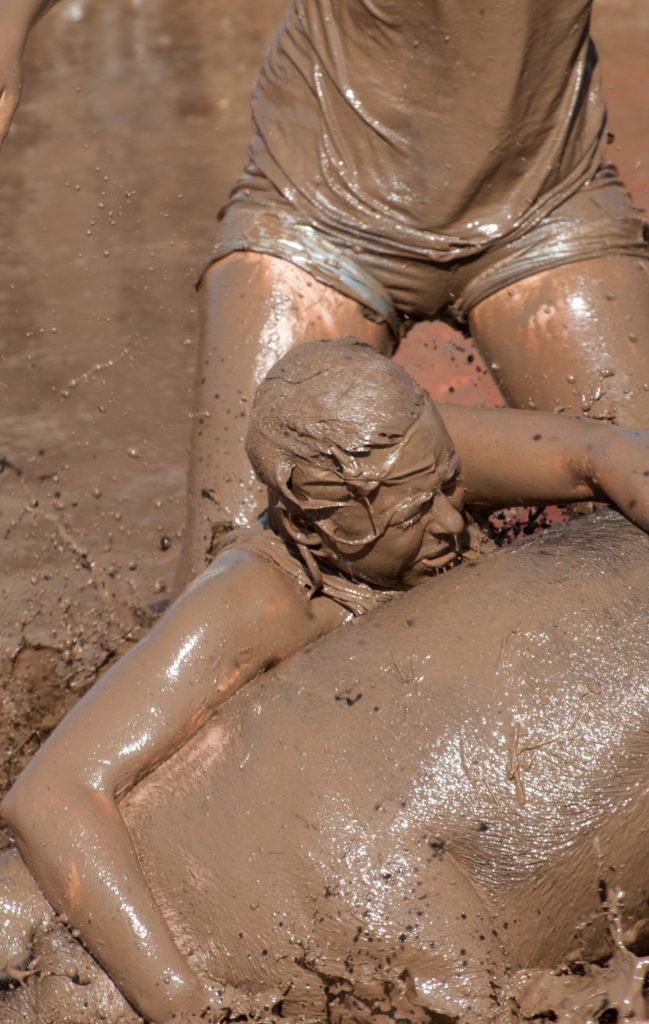