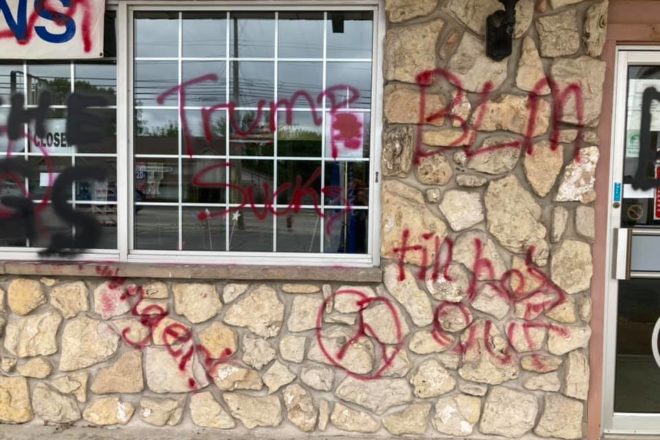 The offices of the Republican Party of Door County were vandalized Aug. 29. Submitted.

When the offices of the Republican Party of Door County were spray painted the night of Aug. 29, it marked a new level of tension during an already inflamed political season. Across Door County, yard signs in support of President Donald Trump have been stolen, run over and spray painted. Signs for Republican Rep. Joel Kitchens and Republican Rep. Mike Gallagher have also been vandalized, often with anti-Trump messages.

Supporters of Democratic candidate Joe Biden have also reported stolen or destroyed signs, but the damage to Republican signs thus far this campaign season has been more visible.

Stephanie Soucek, chair of the Republican Party of Door County, called the vandalism disappointing, but not shocking. She said the atmosphere this year is intense.

“It feels like there’s such a stark difference between the parties now,” she said. “The Democrats have gone left, and the Republicans, as one person told me, are not the ‘country club Republicans’ anymore. It’s more blue collar.”

The chair of the Democratic Party of Door County, David Hayes, said that effort spent on destroying signs or vandalizing offices is misplaced.

“It frustrates me that someone has that much energy and anger, and that’s how they express themselves, rather than get involved in a positive way,” he said. “Instead, they do something petty and childish.”

Hayes and Soucek met Aug. 31 to discuss ways to keep the campaign respectful. Soucek, who has served as party chair since 2018, said she tries to lead by example on social media.

“I try to strike a balance,” she said. “I want to stand for what I believe, but also be a good example of someone who can be reasonable and diplomatic.”

In a statement, Gallagher urged supporters of both parties to be respectful of differing opinions.

The Sturgeon Bay Police Department announced Tuesday that it had cited a 19-year-old Sturgeon Bay man for the vandalism of the Republican headquarters and a number of campaign signs on Egg Harbor Road. The man was issued a misdemeanor citation for criminal damage to property and will appear in court Oct. 5.

Both Soucek and Hayes said they get calls every day about stolen or damaged signs. Many of those are four-foot-by-eight-foot signs that have become much more prevalent during the last two presidential campaign cycles and provide a much bigger target for vandals than the more traditional, smaller yard signs. Republican candidates are dominating the race when it comes to large signs on the peninsula, in part because Kitchens, Gallagher and Trump are incumbents who already have signs in circulation.

Hayes said he has had at least 100 requests for large signs for Joe Biden, but the state party has not indicated whether it will be producing them.

Come Election Day, the sign competition may not matter much. Though one study estimates that the use of yard signs has quadrupled since the mid-1980s, most experts don’t believe the signs do much to sway voters. A 2015 Columbia University study showed lawn signs may affect results by no more than 1.7 percentage points, and likely less. That would affect about one in every 50 races.

Soucek said the signs do demonstrate one thing: “You can’t always gauge how the candidate is doing based on signs, but it seems like people are more engaged than in 2016,” she said.

Finally, in a county that regulates signs very closely, how is it that political signs appear to be growing in both number and size?

Mariah Goode, head of the county’s Land Use Services Department, said that’s due in large part to practicality. Campaign signs are not specifically mentioned in the Door County sign ordinance, but the department regulates them as special-event signage.

That section limits the size of signs – such as those used for real estate, yard sales and events – to six square feet. Each position is considered its own event, so a property owner is allowed one sign for each race. But Goode said the department is in no position to police campaign signs.

“We used to require a permit for campaign signs on commercial properties, but that was a nightmare,” she said. If her department responded to one complaint about an unpermitted sign, it would be deluged with reports of dozens of others from the other side.

Goode said that even if her department tried to police the size and number of campaign signs, the campaign would probably be over by the time appeals could be settled.