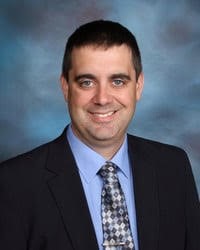 The Southern Door County School District has chosen a familiar face to return to the district as elementary principal starting July 1.

During a June 8 Board of Education special meeting, former teacher and alumnus Marc Vandenhouten was named the new Southern Door Elementary principal, selected from a pool of 34 candidates. The position became available when Cory Vandertie resigned for family reasons after serving as principal since 2017.

Before beginning his administrative career, Vandenhouten served as an elementary teacher at Southern Door, spending five years teaching fifth grade and one year teaching third grade. In addition to being a classroom teacher, he was involved in numerous district programs, grants and new initiatives, and he coached at the elementary, middle and high school levels.

“I am honored to have been selected to serve the Southern Door community as elementary principal,” Vandenhouten said. “This is a special place for my family and me that we’re proud to call home. I’m excited to get to know every student personally, and to start working collaboratively with our school staff, families and community partners.”