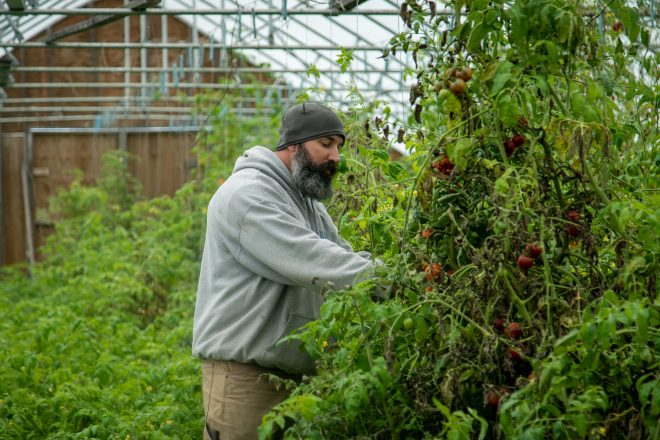 Jake VandenPlas picks a tomato inside one of the greenhouses. The chemical-free, GMO-free produce would be cleaned out in a few weeks and the chickens allowed inside to feed, also providing some natural fertilizer for the next year’s crop. Photo by Rachel Lukas.

Jake VandenPlas was a gunner for his first tour in Iraq, a convoy commander for the second. The Wisconsin Army National Guardsman saw combat enough to recognize his good fortune.

“There were a few times and several scenarios where you look back, and you’re trying to figure how you even made it out,” he said. “And it’s those things when you get back home that make you appreciate just watching the sun come up in the morning from the greenhouse. The little stuff like that keeps you wholesome, brings you back down to earth.”

And now, VandenPlas wants to share all of that with as many veterans as he can and set them up for success so they can achieve on their own what he’s discovered.

He and wife, Emily, recently formed a new nonprofit organization, Door County Farm for Vets, that will provide education and support to veterans entering the agricultural field. The service, free for the veteran, includes a two-year training program in regenerative agriculture and the sustainable, chemical-free production of produce, livestock and cherry and apple orchards.

Start-up capital earned from the retail sales of the produce will be provided to the veteran upon successful completion of the training program, which will include a curriculum and some bookwork during the off-season: placing seed orders and designing plots for rotational plantings, for example. The program will also acquaint veterans with the process of buying their own land and provide informational sources.

The site for the program is the VanderPlases’ 40-acre farm off County S on Vignes Road in Forestville. They purchased the property and moved in Feb. 28, 2018. By the second weekend in March, they had the greenhouses fired up and were planting their own food.

VandenPlas, 37, had had next to zero experience growing vegetables, but he’s learned by doing during the past four years, producing vegetables, pork and eggs. That’s just for starters. Plans are in the works for meat chickens, honey, maple syrup, wild rice, beef cattle, walnut trees and a trout pond.

“It’s all an evolving ecosystem,” he said.

“When you’re in the military, you have leadership. Managers manage, and leaders inspire. You get out on the civilian side, and you don’t really have that.” — Jake VandenPlas

They sell their food at local farmers markets and from their on-site farm store, acting as strong advocates of the self-reliant food networks that connect food producers and consumers with nutrient-dense food.

An assignment in an environmental-science class that VanderPlas took while working toward a business-management degree at UW-Green Bay created the inspiration for his new lifestyle. The class watched the 2007 documentary King Corn and then had to go two weeks without eating or drinking anything that had corn in it.

“So now we’re looking at product labels,” he said. “Corn is in literally everything.”

It was a crazy realization for VanderPlas and one that came with a thought that set him on his current path: “Maybe we should look at growing our own food.”

Working the soil has also worked wonders for his mental health – better, he said, than anything he received through the VA. He’s certain other veterans would benefit.

“We want to be able to help veterans who are struggling,” VanderPlas said. “There are a lot of veterans already doing this across the country. It’s helped veterans with PTSD [post-traumatic stress disorder]. When we still have 22 veterans per day committing suicide, I refuse to sit by and continue to let this happen.”

The difficulties veterans encounter when reentering civilian life are many. VandenPlas has experienced those first hand.

“After two tours in Iraq, one of the biggest things I struggled with coming home was not being able to find a job that actually had leaders,” he said. “When you’re in the military, you have leadership. Managers manage, and leaders inspire. You get out on the civilian side, and you don’t really have that.”

There’s also an absence of opportunities that match the level of experience and responsibility veterans have had while they engaged in combat operations in faraway lands.

“I was 21 years old, and I’m running convoys across the whole theater of operations,” he said. “I’ve got 60-some semi trucks, three or four gun trucks with me, and I’m responsible for taking this whole convoy, and for multiple lives, and personally signing for $1 million worth of equipment, and we did it. You come back home, and you’re applying for baseline, entry-level positions, and they’re like, ‘Yeah, we just don’t think you’re qualified.’”

VandenPlas came to Door County via his hometown on the other side of the bay for employment at Fincantieri Bay Shipbuilding, working first as an electrician and then as team lead for the winter fleet for a couple of winters. But working in agriculture has given him a sense of purpose he found lacking in civilian life.

“One of the biggest things that veterans miss when they get out of the service is actually serving something bigger than themselves,” he said. “Through this here, they get that back. Your blood, sweat and tears roll into growing not just any produce, but nutrient-dense produce, which makes a healthier community.”

Next season will be the farm’s first for the nonprofit program. They’re working on getting donations to cover the capital expenses, but now they need to find the veterans. That’s the biggest hurdle VandenPlas foresees: buying 20 weeks’ worth of time for veterans to immerse themselves in the program without having to work a full-time job.

“Not every veteran is just able to take six, seven months off of work,” he said. “So we’re looking for donations from people to sponsor a veteran so they can have their bills paid.”