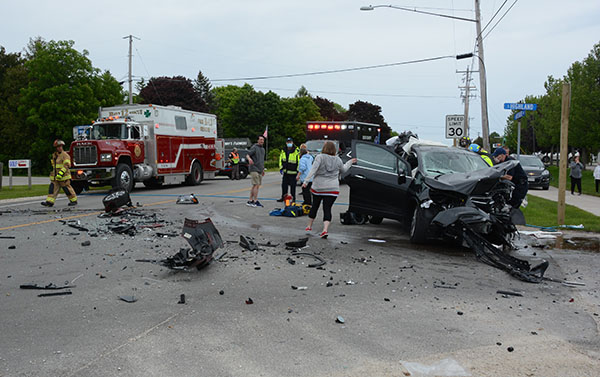 The Door County Sheriff’s Office has identified the woman who died in a car crash in Sister Bay Sunday, June 7.

Rita Bloedel, 89, of Sturgeon Bay died when Bruce Lamb, 75, of Janesville drove his vehicle across the centerline of Highway 42 and struck the vehicle driven by Bloedel’s daughter, Susan Dart. Bloedel was riding in the front passenger seat of Dart’s vehicle.

The crash occurred at 1:07 pm in front of Johnson’s Park Mini Golf and Go-Karts, where the speed limit is 30 miles per hour. Chief Deputy Patrick McCarty said there was no indication that either vehicle was speeding at the time and said the initial investigation did not reveal what caused Lamb to cross the centerline. The Wisconsin State Patrol Reconstruction Unit is assisting the Sheriff’s Office with the mapping of the crash scene and an analysis of what occurred.

Each vehicle had three occupants, all of whom were taken to the hospital for treatment. Five were transported by ambulance to Door County Medical Center, and one was transported by helicopter to an area hospital, according to a Sheriff’s Office statement. Bloedel’s daughter Susan Dart and son Robert Dickman were among the injured.

McCarty said Bloedel is the county’s first traffic fatality of the year. On May 23, 76 year-old John Smejkal of Ellison Bay was killed when he lost control of his vehicle while backing down a steep driveway on Wisconsin Bay Road. McCarty said that because that accident occurred on private property the Wisconsin Department of Transportation has not decided if that will be classified as a traffic fatality in official reports.