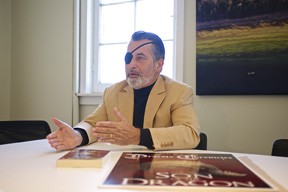 Author Victor Foia speaks with writer Sally Slattery about his childhood in Transylvania, his research of Dracula, and new book, “Son of the Dragon.” Photo by Len Villano.

Growing up in Transylvania, seasonal Door County resident Victor T. Foia was introduced to the story of Dracula – not the blood-sucking vampire of Bram Stocker’s famous novel Dracula – but his nation’s hero, a man to revere, admire: Vlad III.

“I was six years old,” recalls Foia, “and he was part of my first school trip. We took a train ride, went through a dark forest, mountain passage, then they marched us up a hill into this medieval town.” After following a foreboding narrow alley, he and his classmates stood before Dracula’s birthplace.

The experience stayed with young Foia, who explains, “all we knew about him – as it was told to us from our teachers – was that he was a national hero. He was the king that saved the country.” The young boy identified with his “neighbor,” as he calls him. “Not all your neighbors are interesting, but some of them turn out to be more fascinating than others,” he laughs, adding, “I was very impressed because he was said to be speaking many languages, he traveled throughout Europe; for me as a child this was very interesting and enticing because at this time Romania was like a prison camp. It was Communist and you were not allowed to travel abroad, you weren’t allowed many things, but not being able to travel abroad was one of the most damning constraints. So I said to myself, even in my youth, I said, ‘One day, I’m going to escape from here and I’m going to travel like he did.’ And I did.”

At the age of 22, Foia was studying theoretical physics when an opportunity to escape the Communist country presented itself. He soon found himself at a refugee camp in Italy. “They gave me a suit – the sleeves went past my fingertips, the pants up to my chest – but I didn’t care, it was the first suit I ever owned in my life,” he recalls. “They gave me a satchel, a razor, a toothbrush, toothpaste, and said, ‘Go to America.’”

Foia, who did not speak a word of English at the time, arrived in Chicago where an acquaintance from his hometown was waiting. Wearing his oversized suit, Foia went up and down Lakeshore Drive, knocking on doors and saying the same sentence to the same people day after day: “I want work.”

“By the fourth day one of these guys got tired of me and asked me through sign language if I could paint,” says Foia. He climbed a three-story ladder in his suit and began painting. “It was April 1970,” he recalls, “it was snowy, rainy, all the paint would spray on my clothes. I was so happy.” Soon they hired Foia as a janitor helper. “A few months earlier I’m a student studying theoretical physics and now I’m joining the janitor’s union in Chicago,” he laughs. “It was exciting.”

Foia taught himself English, obtained a scholarship, and received a degree in computer science. He was also introduced to the West’s version of Dracula.

“I was in downtown Chicago, cruising around for some fun and I see on the marquee the word ‘Dracula.’ I asked myself, ‘How could people in America have heard of Dracula?’ Because I knew my country was just a small piece of land. I asked somebody, ‘How do you know about this?’ And they said, ‘Everybody knows about Dracula!’”

Foia attended the film and remembers feeling “a bit offended. It was nothing of what I knew [of Dracula],” he says. “I went to the library and tried to find out what was known about the real Dracula and couldn’t find anything. I told myself, ‘Somebody ought to tell the real story of Dracula.’”

So Foia began what would become 40 years of research. “I had to go to different sources, pick up pieces of information and compile them,” he says, adding, “In the meantime, a lot of non-fiction literature has become available by historians. But I’m not a historian, I’m a storyteller.”

In the midst of researching, Foia became a CEO, traveling the globe and working with people from many different countries, as he promised himself he would. He married and had two sons who grew up with their father’s tales of Dracula. “When I retired,” Foia recalls, “they said, ‘Dad, you’ve got to write this down!’” 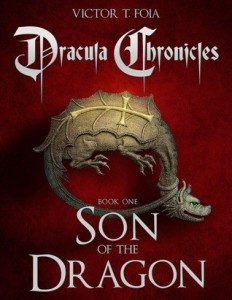 Last winter Foia released the first of seven volumes of Dracula Chronicles, titled Son of the Dragon. The first volume tells of Dracula’s origin, setting the stage for the king’s world.

“One of things I focused on was looking at who were the players at that time, people who are no longer remembered,” says Foia. “At that time they were prominent, they were the biggest names in the world. To understand [Dracula], you have to understand them. I developed the world of Dracula, not just him. I don’t claim to have uncovered anything that historians don’t know. I want to tell a story that is entertaining, well-informed, and possibly informing.”

Though Foia doesn’t plan to turn his main character into a fang-growing vampire, he will touch upon the stories from which that legend sprang.

“What has made him famous to the West is this interpretation of him being unlike normal human beings,” explains Foia. “People observed behavior on his part that was unexplainable and there were strong suspicions of shape-shifting. He would disappear in the mountains and would sometimes be in a cave for days and days. Well people testified that we would go in the cave and then at night a wolf would come out of the cave.” The king also appeared impossible to kill, even after several attempts were made on his life. “That made people wonder,” says Foia.

Dracula was also a ruthless ruler. “He decided to make order in his country,” explains Foia. To eliminate the enormous amount of banditry in the country and encourage merchants to visit and restore the economy, Vlad III “would not except any degrees of guilt,” says Foia, “you either observed the law or you died. And his means of execution was impalement – that’s why his official name in Romanian history books is Vlad the Impaler. Dracula was his nickname.”

Vlad the Impaler is said to be responsible for the deaths of hundreds of thousands of individuals. “He applied his law and order in such extreme measures that it terrified Europe,” says Foia. “In Turkey at this time, mothers would scare children – if they didn’t behave – by saying, ‘Dracula is going to get you!’ And that was in his lifetime!”

After researching and visiting Dracula-era landmarks in Romania, Greece, Italy, and Crotia; learning more of Dracula’s world through books and films; studying Dracula – the myth and the man – Foia feels proud to present his first volume of this major undertaking.

When asked whether or not he believes Dracula is an otherworldly creature, he smiles, “I present the facts and perceptions of the people at [Dracula’s] time, I’ll let the reader make up their own mind.”

Son of the Dragon is available on Amazon.com as both eBook and paperback, at Novel Ideas in Baileys Harbor, Book World in Sturgeon Bay and Sister Bay, as well as at Passtimes Books in Sister Bay.

To learn more about Foia and Dracula Chronicles, visit http://www.draculachronicles.com.