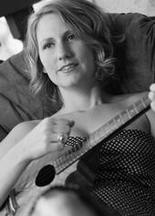 Singer, songwriter, and guitarist Victoria Vox will be featured in concert Wednesday, December 12, at the White Gull Inn in Fish Creek. The 8 pm concert is the second of a series of six this winter, featuring nationally touring acoustic folk musicians.

A graduate of Boston’s prestigious Berklee College of Music, Vox moved to Nashville in 2000 to pursue a songwriting career, but rejection from the country songwriting community pushed her down an alternate path. Leaving Nashville for England, she returned to the States six months later with a collection of emotionally inspired songs which became her 2002 acoustic recording Still. An accomplished guitarist and ukulele player, Vox released Victoria Vox and Her Jumping Flea in 2006 to rave reviews.

Vox will be joined in the concert by singer and cellist melaniejane. Tickets are $15.

Concert tickets can be purchased at the door, although most concerts are sold out, so advance ticket purchase and reservations for the pre-concert dinners are recommended. Tickets and more information on the concerts and the optional dinners can be obtained by calling the White Gull Inn at 920.868.3517 or toll free 800.624.1987, or accessing the inn’s website, http://www.whitegullinn.com.

Upcoming performances at the White Gull Inn include Lou and Peter Berryman on January 9, Wil Maring and Robert Bowlin on March 12, Cindy Mangsen and Steve Gillette on April 9 and Joel Mabus on April 30.