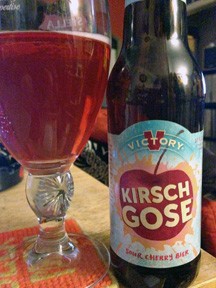 Despite having been badly let down by a Victory beer last year, I did not hesitate to pick up a four-pack as soon as I saw Victory’s Kirsch Gose at my local.

Damn the past, the label on this beer is so brilliant that you just know the beer inside will live up to the come-on. No one would dare such a tempting label and not produce. That would mean certain death.

I have always been a fan of cherry beers – or, at least, well-made cherry beers, and there are many excellent versions ranging from light to dark styles.

But what a stroke of genius to combine tart cherry with the great salty/sour style known as Gose, and wrap it in an eye-catching label. That will earn you my undivided attention.

Kirsch Gose is so very good. It’s a lovely rose-colored liquid and its taste is tartly sour and salty and effervescent. It is alive with bright flavors.

Gose, in case you have not yet encountered it, is a sour and salty beer originally from the town of Goslar, where the local water supply apparently had high salinity. Brewers in Leipzig, which lies about 115 miles southeast of Goslar and has a population 10 times larger, adopted the style and today Leipzig is considered the home of Gose.

As with other Gose beers I’ve had, if you aren’t getting the salty flavor from Kirsch Gose, lick your lips. You’ll find it.

Malted wheat makes up at least 50 percent of the grain bill and the style was spontaneously fermented with wild yeasts. Today the introduction of Lactobacillus bacteria after the boil results in the refreshing sour tang of this unique beer style.

The style was almost lost to time in the mid-20th century when the last Gose brewery was closed in 1945. The style underwent several revivals after that, but the Iron Curtain had dropped on East Germany by then, so its revival was unknown to the rest of the world. Thank the craft beer evolution/revolution for its revival.