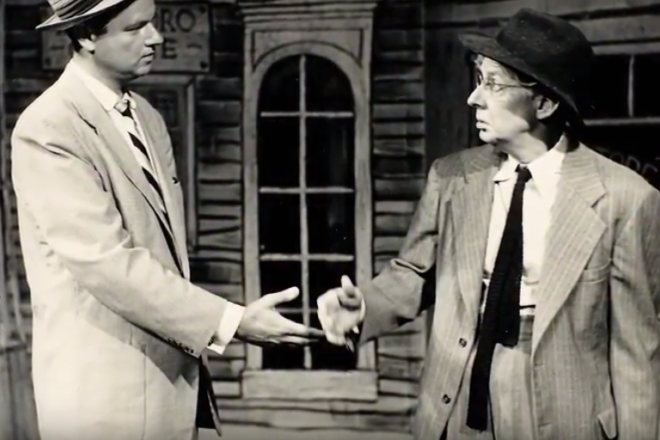 The Door County Visitor Bureau’s latest episode of the Our Door County web series is out, and theater lovers will want to watch.

The new video, produced by Peninsula Filmworks, is titled “Behind the Curtain,” and takes viewers behind the scenes at summer theater in Door County, including interviews with many of the people behind the scenes at Peninsula Players. It’s one of several acclaimed theaters in Door County – Northern Sky, Door Shakespeare, and Third Avenue Playhouse have earned regional and national acclaim as well – and claims a history that stretches back generations.

Peninsula Players began as a tiny stage behind the Bonnie Brook Motel in Fish Creek in 1935. Today Door County is known as a haven for the arts on stage, on canvas, and on paper, but in 1935 that reputation was a generation away. The brother and sister team of Richard and Caroline Fisher had a vision that would change the course of Door County, and 81 years later the Players is synonymous with the Door Peninsula.

Each summer actors, interns, costume designers, directors and staff funnel back to the shoreline stage from across the country, drawn not just by the theater, but an atmosphere that has come to be known as a “summer camp for actors.” It’s a theater where actors and crew live in cabins on the grounds, and eat at the call of a dinner bell, together.

For visitors, it’s a step away from the rest of the world to a place where “Mother Nature is your lobby.” Found at the end of the road, nestled into the cedars on the shoreline, attendees wander paths and skip stones before the show.

As Players veteran Kyle Pingel says in the video, the Players is “an escape, a fantasy land.”

But the Players, like other Door County theaters, is set apart from others by the experience that Door County offers. It’s a connection best summed up by another of the theater’s vets.

“Most of the theaters in Chicago you don’t cry when you drive away,” actor Tom Mula says. “Here you do.”

The Pulse on the Players

For more about the history of Peninsula Players and the pull it has on the people who work and perform there, read the following articles:

Bob Thompson:  The actor appeared on the Players stage in seven decades and was considered the dean of Door County performers when he died in 2010.