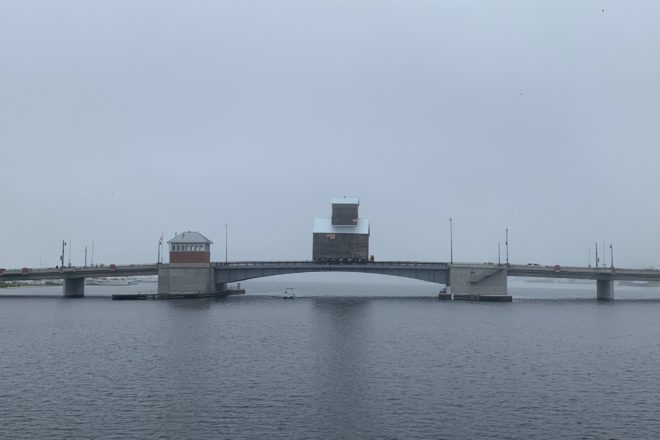 The Teweles and Brandeis grain elevator at the halfway point of its journey across the Oregon Street Bridge Monday, June 24. Photo by Myles Dannhausen Jr.

“It’s moving faster than I expected,” a woman said as she angled for a look at the Teweles and Brandeis grain elevator through the windows of Glas Coffeehouse on Monday, June 24.

The granary was cruising – as much as a 70-foot-tall structure on wheels can cruise – through the second half of its journey across the Oregon Street Bridge on its way back to its original home on Sturgeon Bay’s west-side waterfront. Customers had a perfect view from Glas, which sits at the foot of the bridge, and many were happy to share their take on the controversy that has dominated city conversation for more than two years.

“A waste of tax dollars!” more than one onlooker exclaimed, only to be corrected by a friendly barista. “The city’s actually not paying a dime,” he explained flatly. “It’s being moved and restored by an anonymous donor.”

“Well, that money could be going to something that matters,” one man retorted as he shoved a lid onto his coffee and hustled out the door.

It certainly wasn’t your usual morning coffee rush, but then again, nothing is normal about an entire granary on wheels inching its way across a bridge for the second time in 15 months.

The four-hour move returned the structure to its original home next to the Door County Maritime Museum, where it will stand on steel girders next to that foundation until testing is completed to find out whether the old foundation of steel pilings remains sound.

How did we get here?

In 2017, Fire Chief Tim Dietman proclaimed the structure unsound and ordered it razed, and the city refused the Sturgeon Bay Historical Society’s (SBHS) offer of a $1.25 million donation to repair it in place.

The historical society purchased the granary with the help of an anonymous donor in March 2018, then moved it across the bridge to the east side to save it from the wrecking ball. Peter Moede, owner of the Shipyard condominiums on the southeast side of the Oregon Street Bridge, rented a spot to SBHS to stage the structure while it explored options. When the process dragged on through the end of 2018, he pressured the historical society to make a decision.

“He loved the building,” said SBHS President Christie Weber, “but we just couldn’t buy the land there, and it belongs on the west side.”

Shortly before the April election flipped the makeup of the common council, the city approved an agreement to take the granary back and relocate it on its original foundation.

The future of the west-side waterfront is still up in the air. The ad hoc West Waterfront Planning Committee is expected to present its vision for the area to the common council in mid-July. The preliminary plan reportedly incorporates the granary but locates it closer to the foot of the bridge. Weber cringed at that idea Monday because it would require the city to build a new foundation for it. The majority of the common council has been adamant that no tax dollars should go to granary-restoration efforts.

Weber said engineers will study the pilings to confirm whether they are still usable and develop an environmental remediation plan for the soil. If the pilings are usable, work on the foundation will begin this summer, and the granary will be moved onto the foundation this fall.

Weber said they will likely pour a cement floor with radiant heating. Then the building will be moved into place and raised up so the first-floor beams can be returned in place.

“We’re trying to design for the largest plan so things can be added later, but so we can stay within our budget in the short term,” she said.

She anticipates the granary will be open for public use in the summer of 2020, but what that use is remains to be decided. Sturgeon Bay engineer Mike Till will lead the project onsite. James Dallman of the Milwaukee firm La Dallman is the chief architect, and Sturgeon Bay native Jeff Beane of Silman is the project’s structural engineer.

Dallman is developing a design to restore the granary to its historic look, but the final features have yet to be determined. A historic renovation does not always require that a structure retain its exact historical look.

“If you can justify a change to the National Registry, you can make changes,” Weber said.

That opens the door for additions, windows and entryways if the plan calls for it. Weber expects that plan to roll out later this summer or fall – so there’s still plenty of time for more coffee shop conversations.