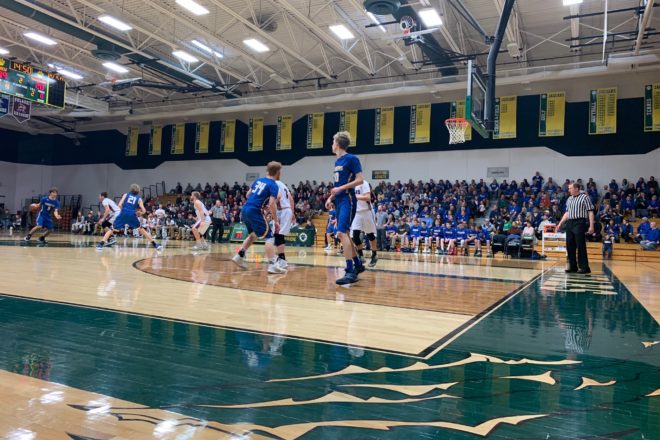 A run 45 years in the making ended Thursday night in Ashwaubenon for the Gibraltar Vikings boys basketball team, where Sam Meerstein showed why he was named the Packerland Conference Player of the Year.

Meerstein’s Green Bay NEW Lutheran Blazers pulled away in the second half for a 78-50 victory over the Vikings, who were making their first WIAA Sectional Tournament appearance since 1974. Their inexperience on the big stage showed early as the Blazers – state contenders 7 times since 2010 – pulled out to a 15-4 lead. The Vikings missed seven layups in the first half, and sloppy ball-handling cost them several other opportunities.

“I think the atmosphere got to us a little more than I expected,” said Gibraltar coach Justin Burress. “We had a lot of 4-6 point swings where we missed an opportunity and they came down and capitalized.”

But Gibraltar settled in, thanks to the shooting of senior Trevor Reinhardt, who drained three three-pointers, two layups, and made a couple of steals to change momentum mid-way through the first half.

“I told the team in the locker room that this game is a thank you to their parents that drove them to practice, to the teammates who worked every single drill, to all the coaches that support them,” Burress said. “A lot of those people were out in the crowd, and I think Trevor took that to heart the most in the first half and just said ‘I’m not going to let this slip away from us’.”

A dunk in traffic by Brady Ash ignited a raucous Gibraltar crowd and pulled the Vikings to within 3 at 17-14. The twin towers of Ash and senior Evan Henry asserted themselves in the paint, blocking several shots and altering others, and sophomore guard Luke Steebs took control of ball-handling responsibilities. With five minutes to play in the half Gibraltar pulled ahead 21-19.

“After splitting with them this season, we thought it would come down to the wire,” Burress said. “I think you could see in that 17-4 run we could play with them. That was the most inspired basketball we played all season.”

That’s when Meerstein took control of the game. The senior set the Green Bay metro area scoring record earlier this season, but it was more than his game-high 30 points that made the difference Thursday. Meerstein played cool, unhurried basketball throughout the evening, carving his way into the paint and dropping passes down to teammates for wide open layups.

“He’s player of the year for a reason,” Burress said. “When I see his dad scouting games, Sam’s there with him. When you have that kind of general on the floor, it’s almost like a sixth man on the court.”

The Blazers kept the Vikings in the game by going 4 for 12 from the free throw line in the half, and at halftime the Vikings were within striking distance, trailing 31-26. It seemed a sectional final appearance was there for the taking.

But Meerstein wasn’t having it. He scored or assisted on seemingly every trip as the Blazers opened up a 43-28 lead just four minutes into the second half.

Gibraltar cut the lead to 47-37 and had possession, but a turnover turned into a Meerstein layup, then a floater, then a three-pointer, and in a blink the Blazers star had scored 13 of 17 points and the game was out of reach. The only other Blazer in double figures was Marshal Bukowski with 13.

Reinhardt led the Vikings with 16, 13 of which came in the first half. Henry had 9 and Spencer Krause 8.

As the clock wound down, Green Bay NEW Lutheran celebrated another trip to the sectional finals and a shot at their 8th trip to state in 10 years. Gibraltar emptied its bench and watched its seniors – Henry, Reinhardt, Ryan Murphy, Jackson Krause, Andras Szakala, and injured Ryan Kropuenske – take their final bows for an unexpected playoff run and a place in school history.

“It shows the kids what a difference a year can make coming off of five wins,” Burress said. “Every business, it feels like they’re cheering us on as you drive down highway 42. I think the guys wanted it for the fans more than they did for themselves. But we have to celebrate what we did this season and get ready to come back next season.”

Green Bay NEW Lutheran will play Columbus Catholic on Saturday for the sectional title and a trip to state.