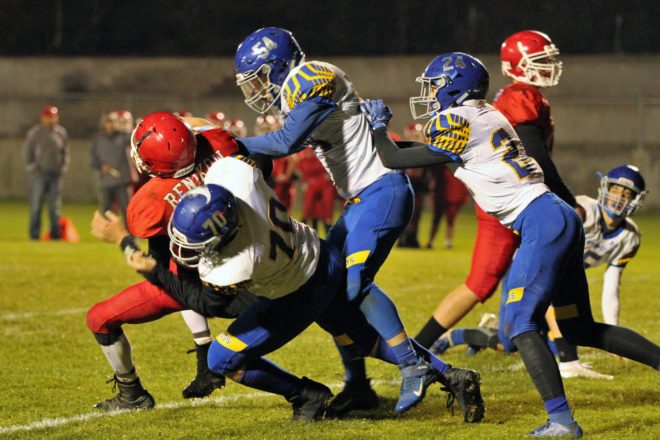 Gibraltar football coach Mike Peck unknowingly brought a greater perspective to the Vikings’ conference title drought with one short statement: “In 1974, I was still not even a thought in my parents’ mind,” he said. “I was born in 1976.”

Surely Roger and Sandy Peck were proud of their son last Friday when Gibraltar defeated MONPLC-8 foe Wausaukee 42-13 to claim its first title since 1974, when the Vikings won the Bay Lakes Conference crown. Gibraltar and Suring finished tied with a 7-1 conference mark, but Gibraltar won the crown by defeating the Eagles 43-24 on Sept. 6.

Peck said the Vikings honored their coach with a traditional water bath as the clock wound down on their clinching victory – something he hopes continues.

“The water bath was refreshing,” Peck said. “Honestly, our players wanted a team sweatshirt, and they picked out a really nice one that repelled most of the water. I actually think Coach [Tyler] Hanusa ended up taking more of the water on the redirection after hitting me. However, if a water bath means conference titles, I hope there will be many more in Gibraltar’s future.”

Gibraltar volunteer assistant coach John Sawyer was a linebacker and offensive guard on the 1974 team that finished 7-0 and one game ahead of runner-up Manitowoc Lutheran, which the Vikings defeated 6-0 early in that season on a touchdown run by Arnie Bridenhagen. Those Vikings rode three hours during the last week of the season to beat Winnebago Lutheran and clinch the title.

“My fondest memory is coming out of halftime to five inches of snow on the ground,” said Sawyer, who was Gibraltar’s head coach for 10 seasons when the Vikings played 11-man football. “I remember the joy of everyone after the game. We rode home on the bus with a bunch of happy teammates.

“It’s pretty much the same thing as the team back then,” Sawyer added. “We had a lot of camaraderie, and we rooted for each other. We have that same bond today.”

The 2019 version of the Vikings started off with a resounding 54-6 loss at Florence. The Vikings, behind a potent passing game, rebounded to win five consecutive games. After falling to 8-1 Algoma in Week 7, the Vikings defeated local rival Sevastopol and Wausaukee to close out the season.

The combination of quarterback Luke Steebs and wideout Alex Laughlin leads an offensive unit that averages 35.2 points per game. Steebs has thrown for 1,258 and 15 touchdowns, and Laughlin has caught 38 passes for 916 yards and 10 scores.

Ironically, Gibraltar has relied on its running game during its final two wins. The Vikings rushed for 356 yards in their 36-14 win over Sevastopol and 308 yards against Wausaukee. Steebs is the leading rusher with 728 yards and 11 scores, and Laughlin has 618 yards on 10 scores. Brandon Stillman has 397 yards and has scored four times.

“It has never really mattered to me how I get the ball or how often I do,” Laughlin said. “Coach always comes with a game plan that we have to execute, whether it involves a more run-heavy or pass-heavy offense. All that matters is that we execute and come out on top.”

Defensively, Stillman leads the Vikings with 133 tackles, and Connor Duffy is second with 129. Laughlin has 99 tackles, and Sam Lindenberg and Spencer Krause have intercepted two passes each.

“Going into this year, we kind of expected it to be an adjustment year with losing the great amount of seniors [who] made a large impact for us [last year],” Laughlin said. “As the season went on, we kept getting better as a team, and the coaching staff developed. When everything is clicking the way it is, it makes success easier to come by.”

The Vikings will travel to Suring for a rematch during the first round of the eight-man playoffs Friday at 7 pm. Running back Logan Stuart leads the Eagles’ run-happy offense with 2,252 yards and 28 touchdowns, including a season-high 378 yards and five scores in a 42-26 win over Florence. Gibraltar held Stuart to a season-low 112 yards and no scores on 24 carries.

Peck and the rest of the coaching staff found themselves in a tough position last season when head coach Scott Biemeret abruptly resigned after the first week of practice. Gibraltar named Jim Laughlin interim head coach, and Peck joined a few days later as defensive coordinator. Tom Sawyer (John’s son) assumed the offensive coordinator role, and John Sawyer helped out as a volunteer assistant. This new staff led the Vikings to a 7-3 record and an eight-man playoff berth.

Peck said that the foundation this staff created last season has had a direct effect on the success the Vikings have experienced this year and that the team has embraced the changes made to the program.

“We started by teaching them football concepts and put in a system that made sense,” said Peck, who was the defensive line coach for the 2005 Racine Park team that won the Division 1 state title. “It was hard for them to buy in when we were asking them to scrap what they had done for two years. The players could see what we were getting at, and things started falling into place.”