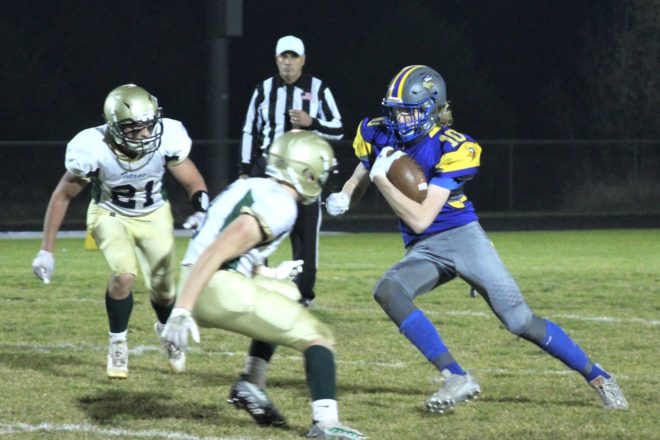 After leading 13-8 at halftime Friday, Gibraltar’s eight-player football team fell behind and saw its season come to an end in the final 24 minutes.

The top-seeded Vikings lost their opening-round playoff game at home to No. 4-seeded Lena/St. Thomas Aquinas, 31-20.

Gibraltar, which won the inaugural Peninsula Conference title after giving the Titans their only regular-season loss, got off to a good start in the postseason after stopping Lena/St. Thomas Aquinas on downs near midfield on the opening drive.

The Vikings then put together a scoring drive capped off with a 9-yard run by Braden Sitte with 8:53 to play in the opening quarter. Their lead remained at 6-0 after a failed extra point.

The Titans recovered a fumble on Gibraltar’s side of the field late in the opening quarter to set up their first scoring drive. A 12-yard touchdown pass from Sam Marquardt to Sydney Slyvester, plus a successful two-point conversion run by Josh Kristof, gave Lena/St. Thomas Aquinas an 8-6 lead with 1:18 left in the first quarter.

The Vikings regained the lead early in the second quarter when they capped off a 58-yard scoring drive with a 1-yard touchdown run by Sitte with 9:19 left until halftime.

The Titans took advantage of a blocked punt early in the third quarter to regain the lead. A 17-yard touchdown run by Marquardt and subsequent two-point conversion by Tyler Shallow gave them a 16-13 advantage.

Lena/St. Thomas Aqunias extended its lead to nine points with less than a minute left in the third quarter on a 58-yard touchdown run by Marquardt.

Gibraltar, which had been hobbled by injuries entering postseason play, including Brady Kita and Will Friedenfels being out of action, continued to be bitten by the injury bug as the playoff game progressed with Sitte replaced at quarterback.

Sitte ended up carrying the ball 16 times for 75 yards and two touchdowns. The Titans’ starting quarterback, Marquardt, had 28 carries for 198 yards with three touchdowns.

After Marquardt scored his final rushing touchdown late in the final quarter, the Vikings’ final touchdown came on a 62-yard run by William Lecy, followed by a two-point conversion pass to Lecy from freshman Giovanni Mercier.

Gibraltar ended the season 8-1 overall. Lena/St. Thomas Aquinas advanced to the second round of the eight-player football playoffs Oct. 28 to face No. 3-seeded Wabena/Laona.

Southern Door opened the Division 5 playoffs in 11-player football Friday when the top-seeded Eagles won 49-0 at home against the No. 8-seeded Brillion Lions.

The Eagles’ final touchdown in the second half came through the air on a 9-yard pass from Lauden Berg to Braylon Berg.

The undefeated Eagles will host their second-round playoff game Oct. 28 against No. 5-seeded Chilton.

Sturgeon Bay’s season came to an end Friday after one game in the Division 5 playoffs when the No. 7-seeded Clippers lost at No. 2-seeded Kewaunee, 71-6.

The Storm also won big, 55-14, when the two teams faced each other Sept. 30 during the regular season in Packerland Conference action.

Sturgeon Bay, which returned to an 11-player schedule this year for the first time since 2018, ended the season 5-5 overall.