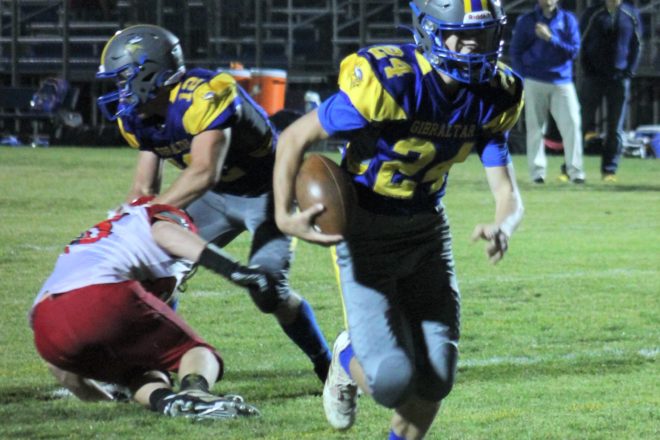 Gibraltar’s Brady Kita (24) runs with the football while getting a block from Hayden Reetz (12) en route to scoring a second-quarter touchdown Sept. 16 against Wausaukee. Photo by Kevin Boneske.

Gibraltar’s eight-player football team scored seven touchdowns Sept. 16, and Brady Kita had a hand in all of them.

He completed six of seven passes for 129 yard, with the two scoring strikes going to Braden Sitte and William Lecy for 46 and 30 yards, respectively.

On defense for the Vikings, Giuseppe Mercier and Marshall Maltby recorded double digits in tackles – 12.5 and 10, respectively – with Mercier credited for 2.5 of the team’s four quarterback sacks.

The Vikings, who remain undefeated on the season at 4-0 overall and 3-0 in conference play, return to action Sept. 23 with a home game against Gillett.

Sevastopol stayed a game behind Gibraltar in the Peninsula Conference standings Sept. 16 with an 18-0 road victory over Oneida Nation/NEW Lutheran.

de Young completed four of 11 passes for 88 yards, Manson had six carries for 63 yards and Wautlet had two receptions for 36 yards.

Southern Door quarterback Drew Daoust ran in the other touchdown from a yard away.

The Eagles, who improved to 5-0 overall and 3-0 in the Packerland Conference, next have a home conference game Sept. 23 against the Peshtigo Bulldogs.

Sturgeon Bay stayed within a game of Southern Door in the Packerland Conference standings Sept. 16 when the Clippers won 40-14 at Peshtigo.

Five of Sturgeon Bay’s touchdowns came through the air, with quarterback Danny Lodl completing 15 of 21 passes for 360 yards.