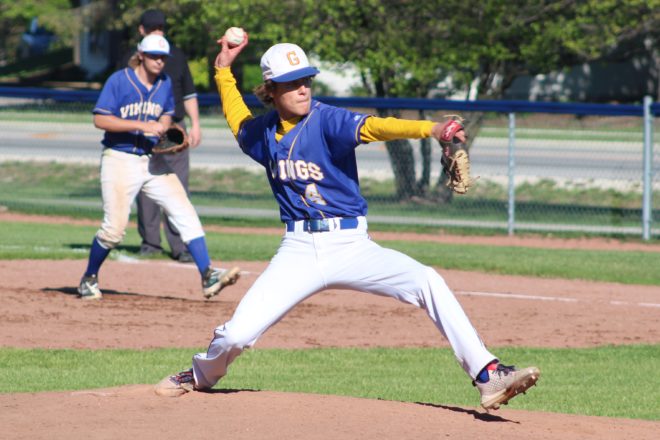 The Vikings’ Noah Greene (4) delivers a pitch Wednesday against Reedsville. Greene allowed a run on two hits with two walks, while striking out six over seven innings to record the pitching victory. Photo by Kevin Boneske.

Fans showing up late for Wednesday’s WIAA Division 4 regional championship baseball game at Billerbeck Field in Fish Creek missed most of the scoring.

After giving up a run in the top of the first, top-seeded Gibraltar/Washington Island scored twice in the bottom of the inning and added a run in the fourth to defeat No. 3-seeded Reedville, 3-1.

The Panthers took a 1-0 lead in the opening inning after catcher Brennan Hynek walked and scored on a single by pitcher Tristan Eichhorst.

Eichhorst walked the first three Viking batters he faced in the bottom of the first to load the bases, after which an infield ground ball by Cooper Cole and a flyout to center field by Ryan Jorgenson gave Gibraltar/Washington Island a 2-1 lead.

The Vikings scored their only other run in the fourth inning when Cole led off and reached first base after Reedville center fielder Blake Delsman wasn’t able to hold onto a fly ball.

Jorgensen then singled and Kevin Krauel laid down a sacrifice bunt to advance the runners to second and third.

Cole dived into the plate to beat the throw home and give the Vikings a 3-1 lead when Hayden Reetz reached first on an infield ground ball.

The Vikings’ Noah Greene pitched all seven innings to record the victory, giving up a run on two hits with a pair of walks, while striking out six.

Eichhorst pitched all six innings for Reedsville in picking up the loss, allowing the three runs on three hits with four walks, while striking out three.

Gibraltar/Washington Island advances to Tuesday’s sectional semifinals in Rosholt, where the Vikings play at 12:30 pm against Iola-Scandinavia.

The winner will advance to the sectional championship game scheduled in Rosholt on the same day at 6 pm to face the winner between Oakfield and Fall River.

The sectional champion advances to the Division 4 state semifinals set for June 15 at Fox Cities Stadium in Grand Chute.