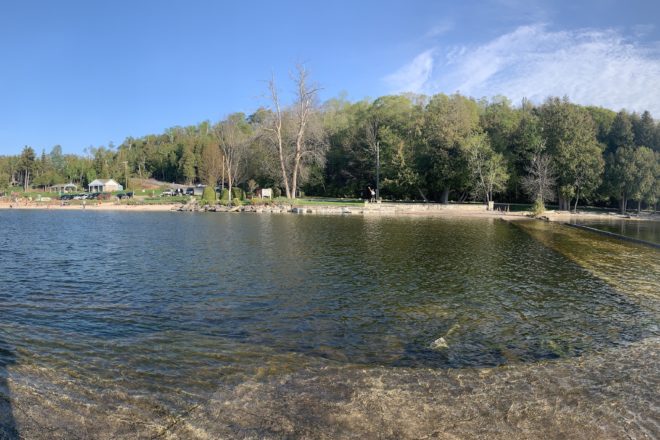 The breakwater at the Alpine (underwater this summer) would be included in a proposed purchase by the Village of Egg Harbor to expand its public beach. Photo by Myles Dannhausen Jr.

Another beach expansion for Egg Harbor may be on the way. The village has made an offer to buy one acre of the Alpine Resort property to accomplish several village goals.

Administrator Ryan Heise could not disclose the value of the offer because it’s still in negotiation, but he said the village has applied for a Knowles-Nelson Stewardship Fund grant that could fund half of the purchase price.

Heise said buying the parcel would allow the village to move the existing wastewater lift station from the middle of the beach parcel to the landward side of the new Alpine parcel. A new station would be built with expanded capacity. Heise said the existing station is maxed out on peak summer weekends.

The purchase would expand the beach to the existing Alpine beach and breakwall. That small pier and beach were the de facto Egg Harbor beach for generations, until the village expanded and renovated the park by purchasing an adjacent property for $1.6 million in 2007.

The beach expansion would allow the village to add much-needed parking, and it could potentially serve as a trailhead for the proposed public, multi-use path between the village and Horseshoe Bay Farms. Planning for that path is underway, spearheaded by the Door County Parks Department.

The future of the Alpine property remains uncertain. It was put on the market in 2018 for $15 million, and unconfirmed rumors have swirled about offers on the property. The Bertschinger family has operated the resort since Paul and John Bertschinger built it in 1921. The resort opened in 1922.

At its Tuesday meeting, the village Plan Commission also reviewed proposals for three new businesses. Tom Starks has proposed a pizza food truck. Leslee Perley presented an outline for a new golf-simulator attraction to be located at 4614 Harbor School Road, the red building south of Hatch Distillery. That business would serve beer and wine and offer two golf-simulator suites.

James “JJ” Johnson, owner of JJ’s La Puerta, is renovating the former gas station next door on the corner of Harbor School Road and Highway 42. The building has been home to a variety of retail businesses for more than 20 years, but it was a Shell gas station during the 1980s. Johnson is renovating the building to bring back the gas-station look and plans to sell pizza and popcorn.