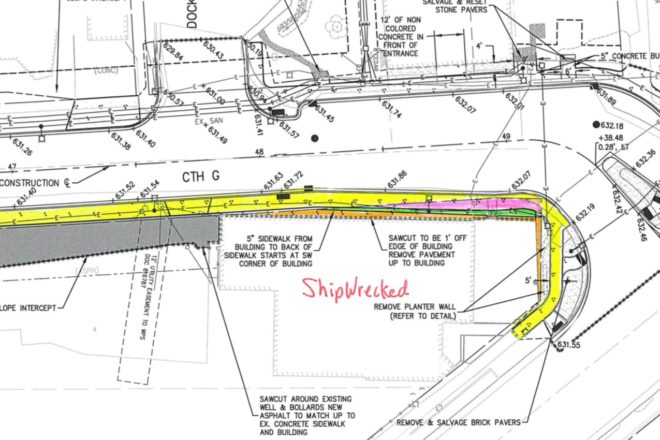 To the Village of Egg Harbor, it’s a long-unused sliver of property that could be used to connect its downtown sidewalks to the off-road pedestrian path that links the village to its public beach.

To the owners of Shipwrecked Brew Pub, it’s a neglected parcel with seating potential that they’re unwilling to part with.

Now it will be up to the court to decide who’s right.

Shipwrecked and its predecessor restaurants have been hemmed in on the corner of Highway 42 and County G for almost as long as Egg Harbor has existed. For decades, patrons simply drove down the middle between the two roads to pull within inches of the front door of the Kewaunee House, or the Blue Iris, or the Thimbleberry.

Those parking spots became an outdoor dining patio during the mid-1990s when the property became Shipwrecked, but the space on the west side of the building along Highway G remained a slice of pavement used for parking and as a way for pedestrians to get to the beach or from the Shipwrecked parking lot to its front door.

After several years of discussion, in February the village offered to buy the .009-acre parcel for $38,500 to install utilities and a sidewalk to connect pedestrians on Highway 42 to the village’s off-road, crushed-stone path along County G that safely leads people to the public beach.

But the owners of Shipwrecked declined the offer. On July 27, the village served notice that it would take the property by eminent domain.

Robert Pollman – the owner of Shipwrecked, as well as Fat Louie’s and Door Peninsula Winery – declined to comment on the lawsuit, but in court filings, the owners, under the business name of Sojenhomer LLC, contend that the village may not acquire the property by condemnation to establish or extend a recreational trail or pedestrian way. They argue that the village does not need to condemn the property to reconstruct County G.

The village argues that according to Wisconsin Statute 340.01 (58), it is precluded only from condemning the property for recreational trails, but that a sidewalk is a part of the road right-of-way. A sidewalk is “a portion of a highway between the curb lines, or lateral lines of a roadway, and the adjacent property lines, constructed for use of pedestrians.”

“The public has used this portion of the roadway and Sojenhomer property for more than 20 years for walking purposes,” reads the village argument. It goes on to point out that for Shipwrecked customers to use the restaurant’s parking lot, they would have to park and then walk into the motorable portion of the road to get to the establishment’s front door.

Village Administrator Ryan Heise said the owners of Shipwrecked have said they don’t want to sell because they could potentially put tables in that space.

“It’s such a small amount of property,” Heise said. “It’s all really silly. You would hope they would want to be a part of doing something that benefits the entire community.”