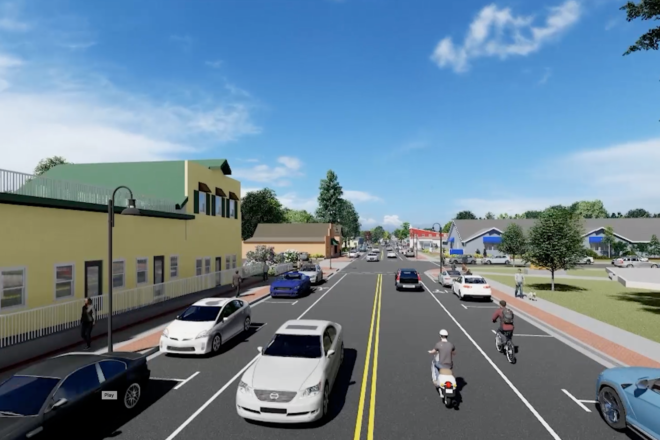 A rendering of the new street plan under consideration in Egg Harbor.

Egg Harbor has seen a lot of change during the last decade: A new marina, an expanded beach, the Kress Pavilion and a spurt of new restaurant openings have brought life to the once-sleepy village. Now major infrastructure improvements are on the village docket as well.

The village is in the midst of another beach expansion slated for completion in early summer, but bigger plans are also in the works for streets, parking and pedestrian improvements during the next three years if the board of trustees approves the plans that the Parks and Public Works Committee has recommended.

Committee chair and village trustee Lisa Van Laanen said it’s an exciting time for the village. She opened her first retail business in Egg Harbor in May of 1989, just as the state Department of Transportation (DOT) was finishing work on the reconstruction of Highway 42.

“At that time, Egg Harbor was still a drive-through town,” Van Laanen recalled. “I wish more people remembered what it was like then because it’s hard for people to grasp it.”

With that project, Egg Harbor got curbs and gutters, streetlights and new sidewalks. The DOT will be repaving Highway 42 in 2023, and the village is planning to use the opportunity to redesign its main-street corridor at a cost of approximately $6-7 million. That plan includes extending sidewalks on the north and south ends of the village, plus burying power lines from County E to School Road, clearing the way for tree canopies and unobstructed views, just as Ephraim and Sister Bay have done.

“Who wouldn’t bury them if you had the chance?” Van Laanen said.

As part of the planning process, the village’s Parks and Public Works Committee toured Fish Creek, Sister Bay and Ephraim. Each of those communities has completed or is in the midst of similar projects.

Karen Peterson, the owner of Maxwell House since 1994, said she’s a fan of the proposed improvements, particularly the pedestrian infrastructure.

“I think it’s wonderful,” she said. “Improving pedestrian access, lighting, burying power lines – it’s what people want to do here. Sure, the highway reconstruction will be painful like it has been for all the villages, but the end result will be something we’ll be proud of.”

Village committees, staff and trustees have been reviewing plans for several years.

“We asked the county to push back work on County G, and we pushed back the highway project to make sure we got it right,” said Village Administrator Ryan Heise.

“There’s a core group of businesspeople [who are] really committed to the future for the village,” Peterson said. “We don’t always agree, but we work on it together.”

If all of the projects come to fruition, the village will have the first marked bike lanes in northern Door County, remove power lines downtown, reduce traffic congestion and gain 150 on-street parking stalls on Highway 42 and Church Street.

The final cost of the improvements is still to be determined because the village has applied for several state and federal grants to offset some of the expense.

When: Spring 2020
The village removed a concrete seawall on the north end of the beach to expand the sand portion of the public beach to the north. The improvements will include natural-stone seat walls and an ADA-compliant path that will lead to the shoreline.
Cost: $525,000

When: 2020
The village and Door County Highway Department are working together to repave and improve Highway G from the village to the golf clubhouse at the Alpine Resort. The work includes widening the road’s shoulders. The village will connect sidewalks from the Highway G/Highway 42 intersection to the off-road walking trail along Highway G, which will provide pedestrian walkways from the village core to the public beach. The village will also bury utilities from Highway 42 to the walking trail.
Cost: $1.5 million

When: 2021
The village will reconstruct “rural” Church Street, which runs behind the village, to become a more urban street with curbs, gutters, a sidewalk, parking and lighting. That work would widen the street to create 10-foot driving lanes, five-foot bike lanes and seven-foot parking lanes to add 150 parking spaces.
Estimated cost: $1.6 – 2 million

When: Construction will begin at the end of 2022 and is expected to be completed in 2023. The Wisconsin DOT will repave Highway 42 through the village in 2022-23.
As part of the project, the village plans to extend the sidewalk from Stella Maris Church to South Trail Road on the south end of the village, and from County E to Harbor Hardware on the north end of the village. Proposed plans include bike lanes on Highway 42, eliminating bump-outs along the highway and eliminating parking near the center of the village to improve sight lines and add a turn lane to ease traffic congestion. The Parks and Public Works Committee has recommended burying power lines at an estimated cost of $2.2 million through the village.
Estimated cost: $6 – 7 million

When: Initial planning in early 2020
The village is investigating the potential for a 3.5-mile off-road recreational trail connecting the village core to Murphy Park. Ben Nelson, director of the Door County Parks Department, is the project lead for this multi-jurisdictional project, which would involve the town and village.
Cost: Unknown