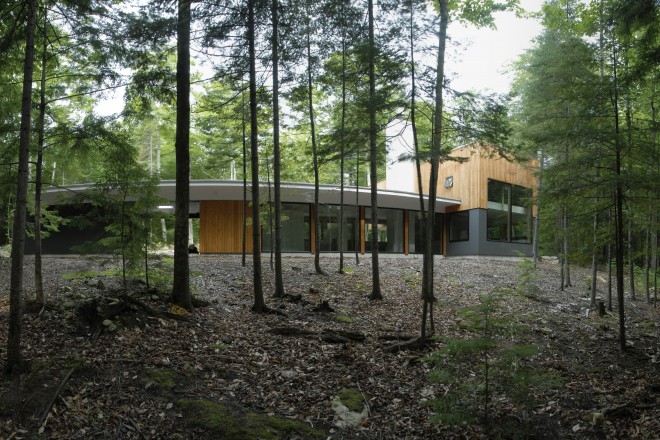 THIS is the forest primeval. The murmuring pines and the hemlocks, Bearded with moss, and in garments green, indistinct in the twilight, Stand like Druids of eld, with voices sad and prophetic, Stand like harpers hoar, with beards that rest on their bosoms.

– from “Evangeline” by Henry Wadsworth Longfellow

Nestled in the woods of northern Door County rests Villibunk, the retreat home of Alice and Bob Chrismer, residents of Evanston, Illinois. Though the Chrismers call it their cottage in the woods, this is not the traditional storybook cottage or log cabin so often found on the peninsula. On first glance it appears as though a giant child has stacked together a few rectangular blocks and wandered off. Upon closer inspection the modernist Scandinavian flare and concise design of architect David Salmela highlight an amazing and interesting structure that pushes past many concepts of traditional Scandinavian design.

With the first walk through the vacant property where they would one day build their dream house in the woods, Alice and Bob were awestruck by the impressive beauty of the parcel. One particular trio of large hemlocks surrounded by sun-dappled pines evoked an intense emotional response within Alice. It had her recalling the opening of Henry Wadsworth Longfellow’s epic poem “Evangeline” and the bond poetry had provided her with her mother. Even today, Alice can recite the words which helped foster a strong interest in many of the principles that drew both her and Bob to Door County. “Somehow the phrase ‘this property just spoke to us’ rang completely true for both Bob and me,” recalls Alice. “We wanted to give ourselves and our family a place where all could come and really experience nature – not manicured, created nature, but where it was raw and powerful. This property, along with the surrounding area, was it.” Though it would be many years before they were able to begin construction on their home, both Bob and Alice felt that they had found their own personal haven.

Along with the property, the Chrismers had also identified the architect that they wanted to use. Alice, who is in the design world, had seen and greatly admired the work of David Salmela for more than 20 years. Having added a picture from one of his earlier homes to their “dream folder” and following his expanding body of work as well as reputation, when it was time to begin the planning for Villibunk, their first call was to Mr. Salmela.

Based in Duluth, Minnesota, Salmela is an award-winning architect whose upbringing in a mostly Finnish community in rural Minnesota has influenced his architectural design. His clean, modern style and dedicated Scandinavian inspiration appealed to both the Chrismers design sensibility and Alice’s Swedish heritage. After agreeing to the collaboration, Salmela came to Door County to view the property and get a feel for what it would provide in context to what the Chrismers were seeking. Bob remembers that he and Alice had just found and purchased a set of vintage chairs by the Danish designer Borge Mogensen. The chairs were in the car when they picked Mr. Salmela up at the airport. “When David saw the chairs, he instantly approved. They were not only a beautiful design, but also incorporated the Scandinavian legacy that is so strong in his work and our lives,” says Bob. The chairs now reside in the living area of Villibunk and seem to have been designed to fit the space, rather than the opposite.

Though the structure is not massive, Villibunk immediately leaves an impression. Approaching the home, it is apparent that the building materials were chosen to complement the surrounding environment, but not completely blend into it. All of the exterior furniture was also designed by Salmela. Each is a unique piece that was constructed on site to his exact specifications to complement the space, and the resulting overall harmony is soothing to the eye.

Upon entering the front door the eyes are initially drawn to the back wall of the house, where enormous seven-by-seven-foot windows run the entire length of the home and bring the surrounding woods to life. The Chrismers desire to feel the natural area around the home is achieved to amazing effect. The proportions of Salmela’s design are so precise that though the ceiling is only seven feet ten inches tall (two inches less than standard eight-foot ceilings), the space never feels close and a surprising feeling of height is achieved.

In the kitchen and dining areas, the windows march all the way up the wall to the only second story area of the home. Combining this wall of glass with the practice of hanging the floor of the second level approximately 10 inches away from the exterior wall of windows, the area is flooded with natural light and encourages diners to feel as though they are eating amongst the trees. The second floor is also treated to beautiful views of the woods while feeling open and bright. Using room dividers, such as a “wall” constructed of one-inch-by-one-inch wooden slats, instead of a solid wall, also allows the home to retain its open feeling. What is actually a small space (the house barely pushes the 1,300 square-foot mark) feels as open and airy as many spaces twice its size. Alice and Bob regularly share the space with family and guests, as was their original dream. Vintage Scandinavian furniture mixed with custom David Salmela pieces bring the feeling of harmony found outside the home to the interior as well.

Connected to the main house by a breezeway is an additional rectangular structure, home to the sauna, a trademark of all the homes designed by Salmela. Composed of natural local materials, the sauna is also completely designed by and outfitted with original furnishings by Salmela and is a treat year round, though Alice and Bob confess it is a true luxury in the winter months.

Villibunk, and all of its original Salmela-designed elements, was carefully constructed for the Chrismers by local builder Myron Beard and his company Highview Builders. For both Bob and Alice, watching as each board was painstakingly fit into place, the process was just as enjoyable as the finished result. “It was amazing to watch as these extremely talented artisans brought the design to reality,” recalls Bob. “It increases our appreciation of the space each time we are here.”

Having begun with the desire to create a haven celebrating the natural beauty surrounding it as well as providing a family gathering place, Villibunk has accomplished all of this for Alice and Bob Chrismer. It has also brought a beautiful and distinct structure to Door County, where traditional and modern Scandinavian designs are honored.