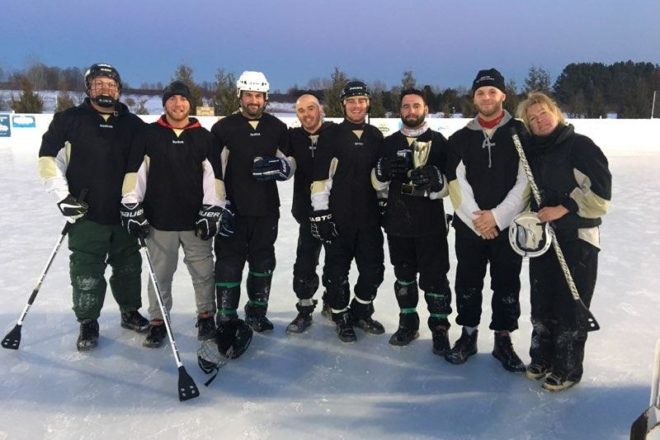 Johnson’s Park topped Alexander’s 2 – 0 in a title game highlighted by the stellar play of goalies Cory Diltz and Patrick Foy. Livieri, a slide-tackling specialist, scored one goal for Johnson’s Park while Spencer Johnson tallied the other.

Alexander’s earned a spot in the championship game by defeating the Peninsula Painters 2 – 1 in a shootout in the semifinal round. The Painters kept the pressure on in Alexander’s zone for much of the second half, but Alexander’s defense led by Rick Chomeau and Paula Anschutz (on loan to counter the Painters ringers) proved impenetrable.

It was the second game decided by a shootout in the playoffs. In the opening game Door County Brewing Co. overcame a 3 – 0 halftime deficit to force overtime against e-Tailer Inc. The teams played to a stalemate in a five-minute overtime period. In the shootout Door County Brewing Co. failed miserably in their first three attempts, while goalie Matt Stone bailed them out with three saves on tough shots from e-Tailer.

Jake Erickson finally pounded home a goal for the victory and the right to get throttled by Johnson’s Park. While Johnson’s Park was able to hold Alexander’s scoreless, they were unable to stop the tenacious Adam Biwer in the semifinal round, as Biwer put the Brewing Co. on the board once in a 9 – 1 loss to the top seed.

The Painters defeated Horseshoe Bay 12 – 1 in their opening round game.