“Do you often get together with your viol friends?” asked Charlie Eckhardt, Instrumental Music Director of Gibraltar Schools.

“We are a group of underhanded people,” replied Dr. Phillip W. Serna, member of the Chicago Early Music Consort. 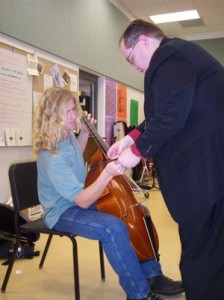 The repartee was not lost on the 130 Gibraltar High School band and choral students crowded into the instrumental music room on December 12 for Phillip Serna’s program, “Viols in Our Schools.” The young people had already learned that viol is pronounced VILE and that the stringed instrument is played with an underhand bowing technique.

Dr. Serna, a graduate of both the San Francisco Conservatory of Music and the Northwestern University School of Music, plays double bass with Chicago area and Midwest orchestras as well as violas de gamba with a number of period instrument ensembles, including the Chicago Early Music Consort.

Midsummer’s Music Festival sponsored the Consort for “A Renaissance Christmas,” a series of chamber music concerts held December 12 – 14 in Door County. Because he was in the area for the performances, Serna presented without charge to Gibraltar Schools the program that he frequently gives to schools in Illinois. 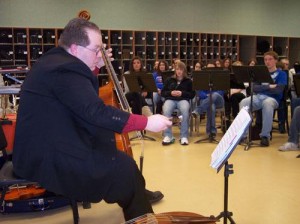 “Gamba,” Serna explained to the music students, “is Italian for leg.” Like a cello, the viol, or viola da gamba, is supported on a “leg” as it is held between the knees of the seated musician who fingers the frets and bows the strings.

While violins typically have four strings, the family of viols, with one exception, has six. And the viols are a good-sized family, the members including high treble, treble, alto, tenor, bass, and violone (the precursor of the modern string bass).

In his lecture-demonstration program, Serna first performed an unaccompanied piece by 18th century German composer Carl Friedrich Abel on a cello-sized viola de gamba to demonstrate the sound of the instrument.

Next he played Renaissance English composer John Dowland’s “Lachrymae” on the treble viol, an instrument not much larger than a modern viola and with a similar sound, but played vertically like a cello.

Serna’s light and entertaining presentation kept the attention of his high school audience as he not only introduced them to a family of period instruments and gave them an overview of the music of the time played on them, but he also included historical-cultural information as well, such as the trivia that musicians were often used as spies during the 17th century because of their travels and contacts with members of their audiences. 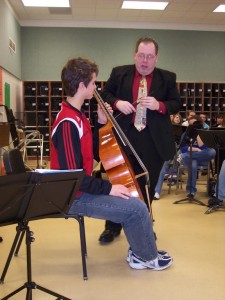 In response to a student question, Serna explained that while he started playing musical instruments in fifth grade, he did not begin performing on period instruments until 1999. His primary contemporary instrument was the double bass. “The string bass,” he said, “didn’t exist until the 19th century. The solo literature is more limited.”

When he began playing viols, he didn’t feel he had really mastered the period instrument until he had learned to play the entire family of them.

He pointed out to another student that viols are occasionally used in contemporary music because of their unique sound.

“Students become more aware of style in music when they listen to period instruments,” Serna said. “They have a different sound and historical context.” While no one can be certain how 16th and 17th century music actually sounded, period instruments provide a better sense of the historical music experience, “and give more of an understanding to the sound world of where the music is coming from.”

Serna likes interacting with students during his presentations, not only answering their questions also letting them experiment with playing a viol.

“I enjoy the disarming questions kids can ask,” he said. “Once a student asked, ‘Why do these instruments sound so fake?’ After I followed up on the question, I found that what she meant was that the notes rang with each other because of the unusual resonance of the instrument.”

Sometimes the enthusiasm of a particular student delights him. “One time I had a kid who really became excited by the instruments,” he said. “Afterwards I learned from his teacher that he had Asperger’s syndrome and many times could hardly be controlled in class.” But in this instance the boy was cooperative and focused on the activity.

Serna’s enjoyment in working with students is apparent as he plays his violas da gamba and talks to them about music. He likes their enthusiasm, “the positive energy,” he said.

“It’s great to have people like him coming into our school,” McMahon continued, “because we have a musical community.”

That musical community is apparent at Gibraltar High School where Vocal Music Director Lauren Gilmore and Instrumental Music Director Charlie Echkardt have between them over 130 students, an impressive number of musicians as the total high school population is 200.

To learn more about Dr. Phillip Serna and the “Viols in Our Schools” program, and to listen to a podcast of period music performance, visit his Web site, violsinourschools.org.