There is a native vine whose fiery leaves in shades of red, scarlet and purple are competing favorably with the blazing Sugar Maples and capturing people’s attention this fall better than I’ve ever seen in past years in our county. A sunny blue-sky day is best for admiring the intense beauty of the Virginia Creeper, some of its towering vines encircling trees and even power poles reaching upwards of 50-60 feet. Virginia Creeper is like many people, including me – they’re organisms that can’t stand by themselves; they depend upon others for support.

Now that the green chlorophyll in the leaves of both the Virginia Creeper and Riverbank Grape vines are revealing their true colors, shades of red for the Creeper and yellow for the Grape, one realizes how extremely abundant, especially the Riverbank Grape, has become. We call it the Kudzu of the North, climbing onto and virtually covering everything that lies in its path. However, in many instances and much to our pleasure, it’s the Virginia Creeper that’s climbing onto and overshadowing the Riverbank Grape. 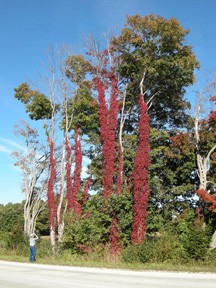 You don’t realize how numerous and widespread these vines are during summer, their green and growing season. Then comes fall and their blazing crimson foliage, like blaring trombones in the frontline of a big marching band, announces their presence.

Yes, it does “creep” along the ground, in some instances right up to the very edge of the highway. However, in light of their being such tenacious climbers, perhaps Virginia Climber would be a more fitting name.

There are actually two species of the so-called Virginia Creeper in our state, which outwardly appear to be very similar. One species, Parthenocissus integra, (par-then-o-SIS-us in-TEG-ra), has leaves which are quite shiny above and whose vines don’t produce a lot of fruit. The vines lack the tiny sticky pads used for climbing, found on the other species, and instead have tendrils that wrap around various objects, including tall trees with rough textured bark, and climb in this manner. Its common name is either Grape Woodbine or Virginia Creeper, plus several other seldom used localized names.

Lacking tall objects upon which to climb, this species can form sizable thickets fairly close to the ground. This is the species we enjoy in Door County.

The other less common species in the state, and very uncommon in Door County, is Parthenocissus quinquefolia (kink-eh-FOE-lee-a) whose leaves are more pubescent [covered in short hairs or down] and therefore not shiny. This vine is most often called Virginia Creeper. These vines may produce more fruit, but they are usually quite high on the tall vines and not easy to see. Due to its sticky pads, this species can climb up virtually bare walls and even windows. (Due to their similarity, I prefer to call both species Virginia Creeper.)

Even though it’s been mentioned that the small blue to dark purplish fruits are not abundant on our county’s vines, birds are quick to find and consume them, species including Eastern Bluebird, American Robin, Common Flicker, thrushes other than the Robin, and the Pileated and Red-bellied Woodpecker. It’s simple to visualize the seeds of the Creeper being spread far and wide in the droppings of the birds, many of which will germinate and grow the following season. 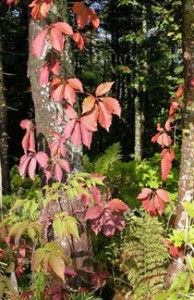 White-tailed Deer, squirrels and other small mammals also consume the fruit, which is considered to be poisonous to humans. Strangely many forms of wildlife are entirely immune to various toxins contained in wild plants but could prove fatal if eaten by people.

Just like some of the other members of the vine family, including wild grapes, the Virginia Creeper can become very weedy and aggressive in its growth habits. In other words, you may wish to use caution in introducing it to your property. My advice is to enjoy and get your fill of Virginia Creeper vines along public right-of-ways or on other people’s property. Apparently it’s in ideal growing conditions (rich, moist soil along the edges of woods), that it appears as though every tiny fruit that falls from the vines germinates and grows into another plant.

The size of the Creeper’s leaves varies. In areas where virtual little thickets have formed within a foot, or even less, from the ground, there I’ve discovered a few of the magnificent compound leaves 15 inches across. I am always reminded of one of my favorite trees, the Horse Chestnut, whose compound leaves usually have five to seven leaflets.

It was during our camping trip in 1975 to the Great Smoky Mountain National Park that we saw for the first time what we had read about – Virginia Creeper and Poison Ivy growing together on the same tree trunk, some climbing 30 or more feet upwards. It’s not surprising some people confuse these two vines.

An old ditty regarding Poison Ivy may help you to distinguish one from the other: “Leaflets three let it be.” Yes, Poison Ivy always has three leaflets per compound leaf compared to the five on Virginia Creeper. 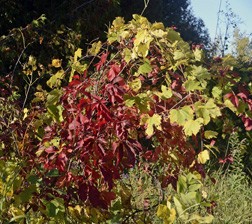 Virginia Creeper clings to and climbs upward on some Riverbank Grape vines.

I have never seen Poison Ivy vine upwards more than a few feet in northeastern Wisconsin, but I did encounter it growing more than 30-40 feet high on tree trunks in the southern part of our state. Naturally, it does commonly vine upwards in the South.

Another confusing aspect of the two plants during the fall season pertains to their vibrant colors. Virginia Creeper tends to be a richer red while Poison Ivy also contains more yellows and oranges as it changes color before losing its foliage.

Its attractive foliage, manner of growth and the excellent cover and food it provides wildlife make the Virginia Creeper one of the most beautiful native vines of eastern United States. Above all, learn to distinguish it from Poison Ivy, and remember that its fruit is highly poisonous to people. Here is a vine that adds rich color to the autumn scene.