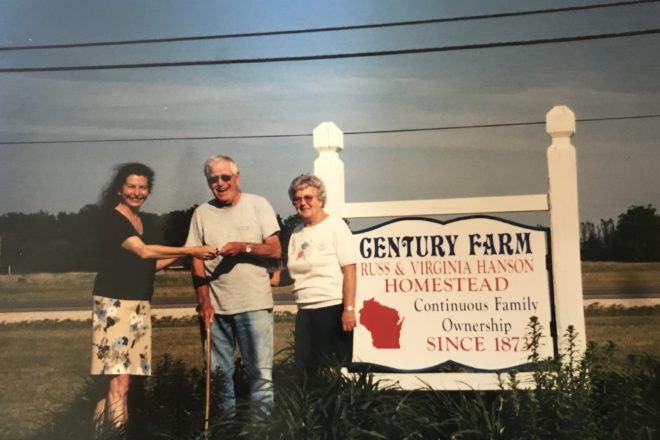 In 1993, Russell Hanson (center) and his wife, Virginia (right), handed the keys to the property of their Century Farm to Liberty Grove Historical Society President Marylin Banzhaf (left), who died in 2020. Submitted.

This is Part II of a two-part story. Read part I here>>

While Russell and Virginia Hanson were raising their three children in the house on the hill in Ellison Bay, Virginia Hanson’s parents returned to Liberty Grove in 1946, adding more to the family history that Virginia, now 96, has been chronicling her whole life.

They purchased the former Disgarden Hotel in Ellison Bay, renaming it the Kramer Hotel, and land was also purchased west of the hotel lot, where they built Kramer’s Kottages. When a fire destroyed the home they lived in south of the hotel, a six-unit motel with their own living quarters – now the Norrland Resort – was constructed.

Virginia helped her parents by cleaning and serving guests in the restaurant until she and Russell built Hanson’s Gifts of Distinction at the top of the hill on the east side of the highway. That building now houses the Greater Escarpment Organization of Door County.

The Hansons raised and sold Shetland ponies – as many as 35 at one time – while their children ran Hanson’s Pony Rides near the gift shop during the early 1950s. The original barn, granary, chicken coop and old outhouse were all lost to a fire Aug. 2, 1959.

“Our old historical buildings were gone forever,” Virginia said. “So much was lost; however, our house was saved.”

But the old barn foundation went on to support another iconic structure.

One of the most-visited buildings on the Liberty Grove Historical Society grounds is the Log House Museum. This landmark served as the first German Lutheran church in Ellison Bay. Dedicated in 1882, it stood next to the Hillside Supper Club, now Hügel Haus. When the original Hillside burned down in 1965 and the replacement was to be built, R.B.H. Excavators – a company that Russell Hanson started in 1963 – was hired to do the work. It meant tearing down the log house to accommodate the new structure – something Russell Hanson said he couldn’t do.

According to Virginia, the owners told Russell, “Well, just do something with it because we want it out.”

As Virginia tells it, Russell moved the structure up the hill, through the field, to Porcupine Bay Road.

“I was right behind them with the car taking pictures,” Virginia said. “They brought it up to the old barn foundation. Looked pretty rough. Another historic masterpiece has been saved for all to enjoy.”

The Hansons and the top of the Ellison Bay hill became an icon for northern Door County, a fact honored in 1991 when they served as king and queen of the Ellison Bay 125th celebration. Over the years, they were often asked to sell the hill property, but they turned down every offer.

The time came, however, when it was getting more difficult for Russell Hanson to climb the steps to the second floor of the farmhouse. Virginia said he came to her one day asking, “What do you think if we sell the farm to the historical society?”

Virginia said her initial response was an emotional one: How could she leave the home where they had raised their children and shared their entire married life? But Russell assured her they wouldn’t leave their home until they were ready and that the house and the garage would be theirs “until the end.”

On June 16, 2003, nearly 15 acres were sold to the Liberty Grove Historical Society – a move Virginia said she is proud to have made.

“With selling to the historical society,” she said, “the farm is now for all walks of life, and our Hanson family will be free to walk the ground. It will always be part of their lives as it has been since they were born.”

The Hansons did move on Nov. 22, 2004, but only across the road. The new home and storage building stand on eight acres of the original farm. Russell and Virginia went between the two houses for four or five years, taking up residence in the old place during the summer months. But after losing their son Bruce, they decided to leave the historical home and live year-round on the east side of Highway 42.

The house purposely sits at a particular angle, giving Virginia clear sight of the Green Bay waters from just over the top of the hill. The foundation was built high so that there’s a beautiful view out of each window. The new home and the old are positioned exactly across from each other. After donating 15 acres to Shepherd of the Bay for a new church, Virginia said she felt that now, “all of the Hanson farmland had a purpose.”

Russell and Virginia had been married 64 years when Russell died in April 2008 at the age of 86. Yet he lives on through the foresight and generosity of the Hansons’ choices to preserve the legacy of rural life in Liberty Grove – a legacy that Virginia documents to this day.

Each day, new entries fill pages in the notebook that’s lying open on her kitchen table. Rubber-banded photos illustrating special moments past and present are there, too. Shelves are lined with scrapbooks containing artifacts and captured moments in time that tell the story of  “all the memories in my head,” Virginia said.

“We have lived here all of our married life and have deep feelings for it,” she said. “We are high on the hill. We see the sun rise and the sun set. The wind blows and the snow swirls, but the beauty is always there. No matter which window we look out of, the sky and the earth is breathtaking. We are often asked if we really appreciate this spectacular view, and our comment is, ‘Indeed we do.’ It is not taken for granted.”