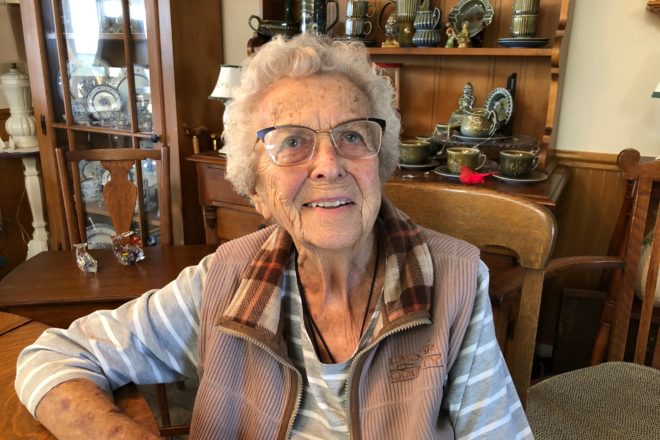 Virginia Hanson, who will be 97 this summer, was photographed in January 2021 by Dave Westen.

This is Part I of a two-part story. Read Part II here>>

Ellison Bay hill offers, arguably, the most picturesque of all the panoramic views in Door County, demanding in all seasons that passersby pause to notice. Virginia Hanson, a lifelong resident of Liberty Grove, has done just that for more than 70 years.

And for almost just as long, Virginia, who will turn 97 this summer, has also ensured that Liberty Grove artifacts are safely kept for telling the story of life at the tip of Door County. Some of those artifacts include books on the “saga of the Hanson Family,” which Virginia has written – something she said she’s proud to have provided for her family for generations to come.

“Hardly a day goes by but that I find myself picking it up and paging through it,” she said about one of the books, The Russell Hanson Homestead, 1873-2010.

“Our community is defined by its people – their culture and way of life,” said Marylin Banzhaf, first president of the Liberty Grove Historical Society (LGHS). “We strongly believe it is our duty to preserve and share this history.”

Virginia remains a vital link to Door County community history and to LGHS in particular. Included in the Hansons’ most recent contributions to the historical society are a disk harrow from International Harvester, a horse-drawn plow and a Milburn wagon dating from 1885.

Virginia’s stories and recollections provide valuable insights to the people who have lived and worked here. And she would embed her family’s history atop that hill overlooking the waters of Green Bay after accepting an offer from Russell Hanson to accompany her home from a dance at Koepsel’s Hall in Sister Bay. His gift to Virginia for her 19th birthday was a Bluebird diamond engagement ring.

A self-proclaimed Door County “pioneer,” Virginia Grace Kramer was born to Melvin and Mabel Grasse Kramer on July 15, 1924. She and her siblings – older brother, Willard; and younger sister, Verna – were raised on the family farm, which was later the site of the Patio Drive-In and Motel in Sister Bay, built and operated by her brother after their parents sold him the property. The family primarily made its living raising dairy cows.

Virginia’s father learned to make cheese at 16 and had owned his own cheese factory in Door County’s German Settlement, which was part of the Town of Liberty Grove among the villages of Ephraim, Sister Bay and Baileys Harbor. The school she attended for a year before enrolling in Sister Bay still stands at the corner of German Road and Highway 57, now a private residence.

“When I was just a real little girl, the John Smiths were our neighbors over by the German Settlement,” Virginia said in an archived LGHS interview. “My mother didn’t drive a car, and my dad was making cheese. When John and Annie would go to the store in Sister Bay during the winter, they’d hitch up a team of horses. They would ask my mother to go along, and I’d sit on her lap, and we’d go on the sleigh with a big team of horses. They had a little stove in there to keep it warm, with blankets around you.”

Melvin Kramer built a cheese factory at the corner of Old Stage Road and Wildwood. Unable to get electricity to the area, the venture was short-lived. In 1937, the building was dismantled and rebuilt near the Kramer farm. Then, just a week into the operation, a spark fell into the paraffin used to seal round cheese, quickly engulfing the factory in flames. Virginia’s father nearly lost his life battling the fire. It was July 6, 1939, when she was about to turn 15.

The accident was devastating for the Kramers. To support the family of five, Melvin Kramer cut and sold logs for firewood. Later, he accepted a job to operate a dairy plant in Fairland, now Namur, five miles west of Brussels – an area known as the largest Belgian-American settlement in the country.

Because it was the middle of February in 1941, Virginia stayed on the farm with Aunt Luetta, Mabel Kramer’s sister from Chicago, so she could finish her junior year at Gibraltar High School. For her senior year, she attended Brussels High School, graduating in May of 1942. Lifelong friends were made during that time, and the three “seniors” who remain still make every effort to get together.

That summer, with her mother and father still in Brussels making cheese, Virginia farmed with her brother, Willard, and worked as a server at the now-demolished Hotel du Nord, which stood at the north end of Sister Bay. Traveling back and forth in a Model A, she was able to help with farm duties between shifts. One of those farm duties was the seasonal threshing.

“One person or one family would have a big threshing machine, and they’d go from farm to farm,” Virginia said. “And I had to cook for the threshers. At 10 am or so, they were ready for a break and would come into the house. At noon was the big meal. And there I was at that age. I had to go and get a beef roast, make that in the oven, peel potatoes, get a vegetable, make a dessert. I made something in a big cake pan. All the men came in; I had to set the table. I don’t know how many there were. Eight or 10 probably. But that was different than just one or two. And before they pulled out, they wanted coffee or something back inside.”

Virginia liked the work very much but had plans to attend Green Bay Badger Business College in the fall – which she did, boarding with the Dysterhouse family and working for the Red Cross after school making bandages for the war effort. But she did not return to school after Christmas, moving back to the farm instead to keep house and help Willard.

“I missed the farm,” she said. “I loved being in the barn – milking, cleaning, caring for the cows. And, well, I had a boyfriend.”

That boyfriend, Russell A. Hanson, was the youngest of five sons. He was born to Albert and Ella Johnson Hanson on Sept. 12, 1921, in a log house on Door Bluff Road in Garrett Bay, where today the Maroneks own and operate Silver Poplar Studios.

When Russell was just a year old, the family moved its belongings – with the help of a team of horses – to the top of the hill in Ellison Bay, where his maternal grandfather, a Swedish immigrant named Augustus Johnson, had purchased land in 1867 from his friend and Ellison Bay founder, John Ellison (Johan Eliason). It was Augustus who cleared the hill for farming.

Growing up on the hill, Russell Hanson attended grade school in Ellison Bay and graduated from Gibraltar High School in 1940. He, like so many others at that time, gathered for social activities at Pfiels Hall, now the Mink River Basin. The original building held an ice cream store, roller-skating rink, movie theater and dance hall. Open two times a week, people came all the way from Sturgeon Bay to skate.

The animals, young stock and pigs that Virginia and Willard owned were divided once she married Russell on Oct. 2, 1943, at Trinity Lutheran Church in Ellison Bay. It was easy for Virginia to shift into the role of a farm wife. She loved the lifestyle, and just two years into their married life, they made plans to begin purchasing the farm.

For the first seven years of their married life, there was no refrigerator or bathroom in the historical home – the first frame house in the area built by Augustus. Until additions and modernizing began, ice stored in a cow tank at the back of the house kept things cold; all the cooking was done with a wood-burning stove; and laundry was completed in a machine brought into the kitchen from the addition at the back of the house.

“We had an outhouse,” Virginia said. “It was kind of rough in those days.”

Russell and Virginia raised their three children – Bruce, Cheryl and Vicky – in the house on the hill while maintaining the land in an open state, preserving the spectacular view.