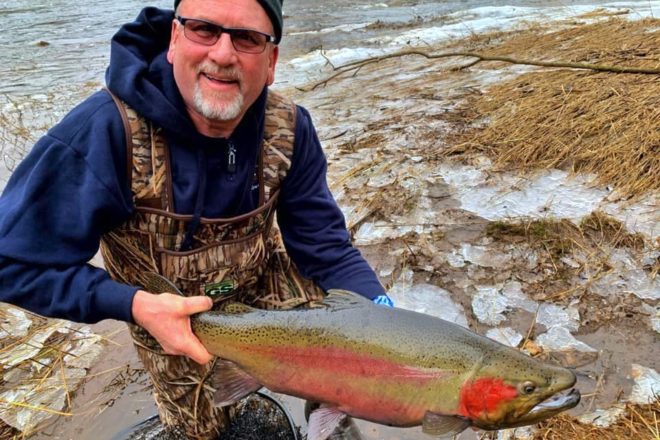 Dave Rueckl of Algoma had a good reason to smile after landing this male rainbow trout (steelhead) over the weekend. Photo by Tyler Yunk.

Everyone’s talking about the coronavirus, but you won’t hear about it at any DNR Learn to Hunt workshop meetings this month. Nor will COVID-19 be on the agenda at the April County Deer Advisory Council meetings or the Deer & Turkey Expo in Madison either.

That’s because they’ve all been postponed due to the pandemic that, as of early March 17, was approaching 200,000 cases and 8,000 deaths in 163 countries and territories across the globe.

As of this writing, no decision had been made about the April 13 spring fish and wildlife hearings and county Conservation Congress meetings, but online voting – which began last year – would still seem to be an option.

Wisconsin is following federal and state guidelines limiting group gatherings in an effort to slow the transmission of COVID-19.

Meanwhile, if you want to escape all the numbing news, there are more open-water options for anglers with each passing day. Lows expected in the teens to low 20s and highs only in the low 30s this weekend won’t feel very spring-like, but if you dress for the cold, you can take advantage of good opportunities.

Some colorful, fresh-run rainbow trout have arrived in all major Lake Michigan tributaries. A few of the smaller creeks have fish, too, but you’ll need to wait a week or two on some of the others. Spawn sacs and jigs tipped with wax worms can get strikes.

Along the lakeshore, brown and lake trout and an occasional northern pike are hitting trolled stickbaits and spoons in the shallows. On the bay side, try jig and minnow combos for walleyes, pike and trout.

Current and retired state and federal fisheries workers, members of conservation groups, Great Lakes businesspeople and sport and commercial anglers were among the more than 1,400 people across the country who commented by the March 9 deadline during an initial phase of public input on expanding the management of double-crested cormorants throughout the United States.

Michigan DNR Director Daniel Eichinger responded to the U.S. Fish and Wildlife Service’s request for comments by supporting an option to establish a new permit for state agencies for authorizing cormorant-control activities intended to relieve or prevent impacts from cormorants on wild and stocked fisheries, aquaculture facilities, property, human health and safety, and threatened and endangered species. States would have the ability to determine whether, when, where and for what purposes they could control cormorants within limits set by the agency.

Although there appeared to be a last-minute letter campaign by a group opposed to any reduction of cormorants – easy to spot through the nearly identical responses – the vast majority of comments were in favor of the feds turning over management (within guidelines) to the states. Many of those who responded detailed real or perceived negative impacts on fisheries, habitat and other bird species.

Rip Koken and Hoyt Purinton of Washington Island and Peter Northard of Sister Bay were among those commenting on the impacts to the islands and fish. Questions of disease and water pollution were also raised.

An Indiana man wrote that he once ran a successful charter business for yellow perch in the Chicago area, but he watched cormorant numbers grow through the years from a few to hundreds to thousands in the area where he fished. He said cormorants put him and local bait-and-tackle stores out of business.

Many writers mentioned perch, bass, and stocked salmon and trout being consumed by cormorants, and others saw the value in prey fish, too. A Michigan man wrote that with fish and birds alike competing for finite prey resources, consumption of alewives and other prey fish by cormorants can be at the expense of desired sport fish.

• Wild turkey permits for all zones went on sale this week, including Zone 2 on Tuesday. All remaining leftovers will be available March 21 at 10 am until they’re sold out. There’s a limit of one per day.

• All 2019-20 fishing and hunting licenses will expire March 31. The new 2020-21 licenses are available at gowild.wi.gov or wherever licenses are sold.