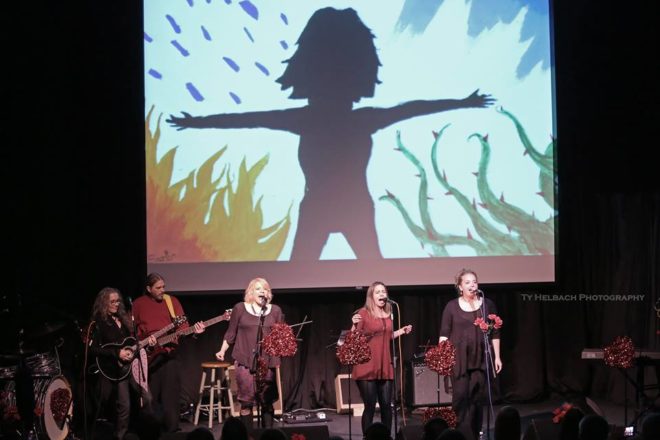 Pottery, textiles and a short film are among the visual arts that were mined for lyrical inspiration this week by 30 musicians preparing for this weekend’s seventh annual Love on Holiday songwriting festival in Sturgeon Bay.

This is the fourth consecutive year of the music-art mashup at Love on Holiday, the Music Motel’s wintertime invitation for musicians to engage in a weeklong, collaborative songwriting intensive. Musicians employ “spin the bottle” throughout the week to establish various songwriting teams. Once established, teams also spin the bottle to be paired with a piece of art. From there, they test their merits as songwriters to craft lyrics inspired by the artworks they are linked with.

On Friday and Saturday evenings, musicians take the stage at Third Avenue Playhouse for public performance of these songs and a showcase of the artwork that inspired them. Given its proximity to Valentine’s Day, Love on Holiday was developed as an outlet for songs of love and love gone away.

During studio tours and conversations with the artists, her aim was to curate a collection that would inspire musicians to “paint with their words and the music. The best music is show, don’t tell.” Visual art has proven a powerful force in the years since it was incorporated into the festival.

As melaniejane explained, it has not only forced songwriters to start their creative process from the same point, but to expand the language with which they write songs. In many ways, all of the visual artists and musicians at Love on Holiday are vulnerable:  artists bravely put their work on display to be explored for inspiration, story and meaning, and translated through lyrics in a public setting.

Knowing many of the visual artists are in the audience undoubtedly inspires Love on Holiday musicians to craft surprising narrative from unexpected places.

“Unavoidably influenced by the songwriters’ own history and experiences, the collaboration between these two worlds will, as in years past, yield music of a depth and power that only this unique cross-collaboration can inspire,” melaniejane said. 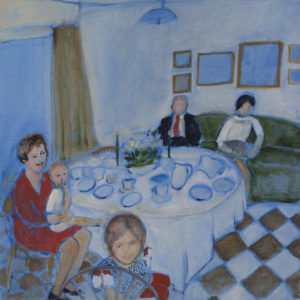 On the corner by the church

I can hear the women curse

As they talk about the daffodils

Down in the parking lot, out in the back

The men in their suits they are splitting a pack

And I know, come next Sunday

They’ll be saying Hail Marys for that

And Dad told me that means

That really they want something more

Falling in leaves, pushing and shoving

Mud on our sleeves, grass stains, and tights running

I ruined my outfit

And Mom wasn’t happy with that

And I know that I swore

But I can’t get there anymore

It just doesn’t feel the same

The time that I swore

I would always come back to you