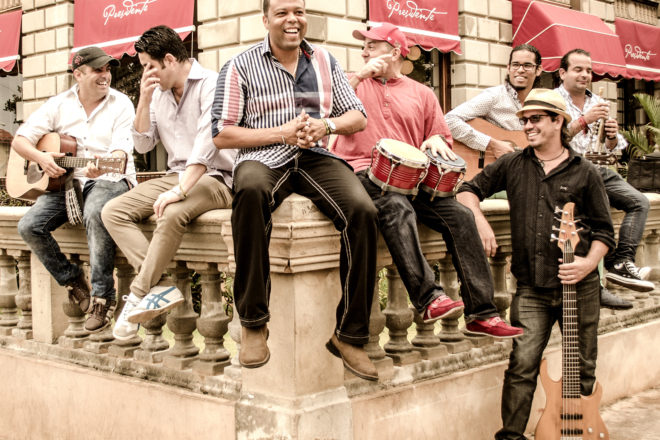 Cuban singer-songwriter Adonis Puentes will pay tribute to the accented rhythms, driving bass lines and warm percussion of his homeland with a performance at Door Community Auditorium on Feb. 16 with his backing band, The Voice of Cuba Orchestra.

A native of Artemisa, Cuba, Puentes rose to fame in his homeland alongside his twin brother, Alexis, with their musical partnership, the Puentes Brothers. The duo earned a Juno Award nomination for their debut album, Morumba Cubana, before embarking on solo careers in 2004. Since then, Puentes has made his mark on the world music scene, earning a Grammy nod for his lead vocal work with the Los Angeles-based Mongorama and sharing the stage of the Lincoln Center with Latin music stars Larry Harlow and Rubén Blades in front of more than 20,000 fans.

The foundation of Puentes’ music is the rhythm of son, a style of music that combines elements of the Spanish canción with Afro-Cuban percussion instruments. From there, he folds in other tropical influences – the sucu suco, rumba and merengue among them – along with jazz that, when combined with his soulful ballads, creates passionate, grooving songs that speak to Cuba’s rich musical culture.

While Puentes sings in English and Spanish, his performance at the Door Community Auditorium will be performed almost entirely in Spanish. For non-Spanish speaking audience members, Puentes has an assurance.

“Since a very early age I realized that by playing music, we are helping the existence of humans on this planet,” he added. “When you play music, people have a tendency to put behind broken problems they have, they have a tendency to let go and dance and connect with each other, which is optimum for me. So from that point on, I understood that my mission in life is to bring that joy to people.”

Puentes is living out that mission through the production of his third solo album, Dicen, which he expects to release this spring. He considers the work an evolution of his first two CDs, Vida (2005) and Sabor A Café (2013) – the latter of which was nominated for World Music Album of the Year at the 2014 Juno Awards.

“I have a lot of faith in this music,” Puentes said of his forthcoming project. “…Music is the way to express my feelings and how I see life. Basically my revelations from living my life I put in songs and I talk a little bit about everything, about spring, the beautiful flowers that come in the spring, I talk about people’s necessity of talking about other people and taking other people’s life without concentrating on their own life, I talk about the importance of keeping close your good friends in life. It’s a little bit of everything there but basically my journey, how I see life, that’s what I try to do musically, be real.”

Prior to the performance, an opening reception will be held at 6 pm for a new exhibit of Spanish cultural art at The Link Gallery of Children’s Art. It will include a Cuban-inspired dinner of Cuban pulled pork sandwiches, rice and beans, and salad. Dinner is $15 for adults, and $10 for children 12 and under. Proceeds will benefit Friends of Gibraltar and the Gibraltar Spanish Department.