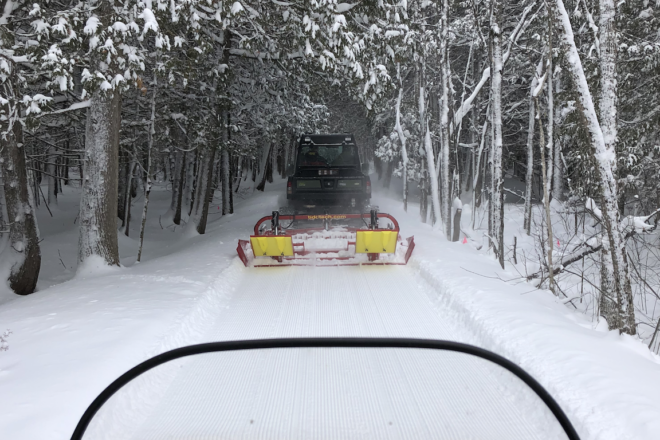 Groomers at Peninsula State Park pack down the snow to create the base layer for the cross-country ski trails. Photo by Rachel Stollenwerk.

When combing through the listings of cross-country ski trails around the county, two common terms you’ll see are “groomed” and “ungroomed.”

Groomed trails are those that have had the snow packed down, leaving behind a sink-free layer of snow. The uniform surface is flat and smooth and can accommodate any type of ski. And behind Door County’s miles of cross-country ski trails are dedicated volunteers who pave the way for everyone’s winter fun.

“It’s a bit of a self-serving effort because I like to ski,” said Rich Dirks, part of the volunteer trail-grooming team at Whitefish Dunes State Park. “But if we can provide that for us, then everyone benefits from it, too.”

When you become a trail groomer, you also become something of a self-taught meteorologist. The amount of snowfall, current and expected temperatures, and the amount of moisture in the air all play a role in when and how the trails are groomed. With 20 years of experience grooming trails, Dirks is acutely aware of the weather and what that means for skiing.

“How much moisture is in the snow is one of the biggest factors,” he said. “This year, we’ve had a lot of snow as far as inches, but not moisture. Some of these snowfalls where we had almost 10 inches, but it was all this light, dry snow, compacts down to two inches [of trail surface] very quickly.”

The equipment used varies by location, but the process generally involves a snowmobile or similar tracked vehicle pulling behind it grooming implements designed to flatten and shape.

The first step is creating that base layer. During particularly heavy snows, a piece of equipment called a roller helps to flatten and even out the terrain. Then the tracks are cut into the surface.

“Different trails are groomed differently, depending on the style of skiing,” said Rachel Stollenwerk, one of the volunteer trail groomers at Peninsula State Park.

For example, skating – a style of skiing made popular in the 1980s – requires a wider base and is often reserved for wider trails, Stollenwerk said.

Skate-style skiing also works better on smoother, flatter surfaces. With the grooming equipment – and enough snow – groomers can stave off high spots and fill in low spots on the trails.

“A lot of our trails are not that level, and it takes quite a bit of snow and work from the grooming devices to level them,” Dirks said.

For that reason, along with the compact design of the trail network, the trails at Whitefish Dunes State Park are groomed for classic style only.

Classic skiing is like a gliding walk or run and features parallel tracks set into the snow.

“[Being classic only] has benefited the park – and some skiers – because a lot of beginning skiers like the closeness and coziness of the trails,” Dirks said.

From start to finish, the grooming process can take anywhere from a couple of hours to several hours, depending on the distance of trail, amount of snowfall and number of volunteers.

In the case of Maury Brancamp – the main trail groomer for Newport State Park’s nearly 20 miles of ski trails – doing the whole system takes four to four and a half hours. If there are any downed trees along the trail that need to be cleared, it takes even longer.

That’s why trail groomers – and skiers – are sensitive to trail etiquette and ski trails being used by skiers only.

“Hikers have many more opportunities to use the trails than skiers do,” Brancamp said. “We want people out there using the trails, but we also want them to be mindful of the ski trails and the time that went into grooming them.”